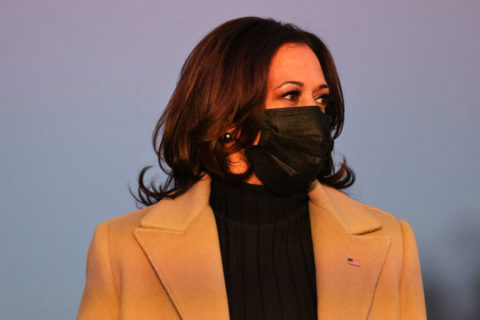 The coat signals what to expect from the new Vice President in terms of how she'll use her wardrobe to champion Black American creativity.

At a COVID-19 memorial ceremony last night, Kamala Harris – who will be sworn in as the first female and first person of colour to be Vice President of the United States later today – notably donned a camel coat by New York-based brand Pyer Moss, helmed by Kerby Jean-Raymond, for the occasion. The look set the tone for what we can expect in terms of how Harris will use her wardrobe as a symbol of support for Black American creatives such as Jean-Raymond, who won the CFDA Fashion Award for American Menswear Designer of the Year in 2020.

Harris’s outerwear choice was not only distinctive thanks to its offbeat design detail of a curved panel across the back shoulders; it more importantly marks a shift in ideology within the White House orbit. While incoming President Joe Biden has reportedly selected a suit by Ralph Lauren for the inauguration, Harris’s bold move last night shows us that she’s not afraid to step outside the status quo with her outfits.

Using fashion as a means of advocacy and calling attention to important issues is certainly nothing new for women who hold political power; and Harris’s coat is an especially potent visual cue for consideration given Jean-Raymond’s outspokenness about tokenism in the fashion industry. But sartorial choices have also been weaponized against such accomplished women; consider the backlash toward Finland’s Prime Minister, Sanna Marin, and her decision to wear a blazer with nothing underneath for a magazine photo shoot last year.

Harris’s navigation of the sexism inherent in people’s opinions of how women dress is worth observation; but last night’s outfit heralds an exciting and much-needed opportunity for change. And now, we wait to see what Harris emerges wearing for her swearing-in…

Watch this space for ongoing coverage of the standout fashion moments of Inauguration Day 2021.

Photo by Michael M. Santiago/Getty Images.
Get the best of FASHION in your inbox Thanks for signing up!
The latest fashion, beauty and celeb news delivered right to your email #FASHIONforall Now, check your inbox to complete your subscription
We won’t ever use your email address for anything else
Want even more FASHION? Follow us on social media.