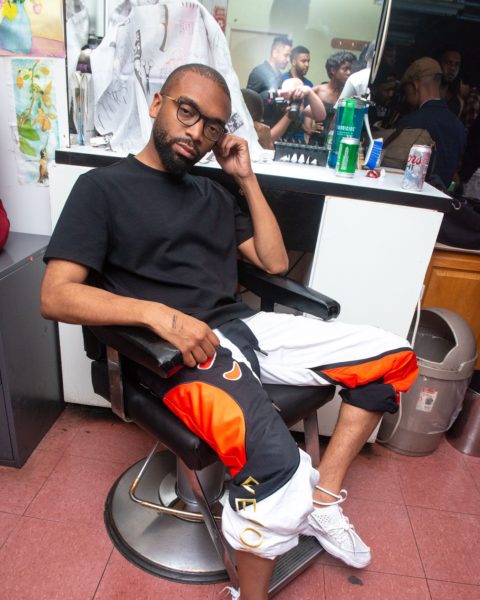 How Pyer Moss is Restoring the Legacy of Forgotten Black Designers

Reverend Al Sharpton, the civil rights activist, was in the room when Kerby Jean-Raymond, the 31-year-old designer behind Pyer Moss — a label he describes as “Black as hell” — won the CFDA/Vogue Fashion Fund Award, on Monday. Sharpton was a guest of Anna Wintour, and his presence in that space, at first, seemed like a strange and magnanimous one, at once swallowed up in the septic history of an industry which, too many times over, has written Black people into its margins.

It wasn’t strange. Whatever alchemical forces brought fashion and politics together, overtly, early last year, might also have guided the Reverend to this moment. He would not witness that routine erasure. Instead, a Black designer known for addressing the mundanities of American racism — often to the detriment of his bag, his profit — would receive the most prestigious and lucrative award a young American designer can get. This moment wasn’t decided by serendipity, but by preterm legacy. Just five short years into its life, Pyer Moss has already become far more than a fashion label. It has become a culture.

When Donald J. Trump became President Donald J. Trump in January 2017, the fashion industry underwent a particular metamorphosis. Many designers who had previously kept their fashion and politics separate, in a kind of personal secularism, abandoned this methodology. “This election has coloured everything we do,” said the designer Tracy Reese. “We wanted to use our voices, something that was new for a lot of us”

But this was not new for Jean-Raymond. Pyer Moss arrived at all of this long before the president became the president. The luxury to compartmentalize work and personal politics is not, it appears, equally distributed. The brand is not subtle. It is assertive — brazen, even. When Jean-Raymond hauls an audience to Weeksville, to showcase a collection exploring the Negro Motorist Green Book, fashion is not the goal, but the medium. Perhaps it’s more fitting to see Jean-Raymond as a sort of historical conspirator, or an archeologist: he is interested in expanding a canon and restoring the legacies of those forgotten Black originators.

When Jean-Raymond presented his SS16 collection, three Septembers ago, he placed himself within a canon of fashion designers — Alexander McQueen, Hussein Chalayan, Telfar — whose brands offer far more than just good clothing. Yet his is a different kind of nuance. At that show, he screened a 15-minute video of prominent celebrities discussing police brutality, interspersed between those eerily familiar clips, produced by the spasmodic onlooker, of Eric Garner, of Tamir Rice, of Walter Scott. Models wore shoes spattered with fake blood, and some garments were scrawled with the names of dead Black citizens. Magazine editors did not sit front row; families of those victims did.

Jean-Raymond’s politics are more existential than they are reactive. He has been called — in a rapturous confluence of nobility and responsibility — the fashion industry’s conscience.” His was not a knee-jerk response to a white supremacist’s election into the highest office in the land; white supremacy had existed long before that bureaucratic appointment. And so had Pyer Moss’s addressing of it.

But fashion’s embrace of Pyer Moss cannot entirely vindicate the industry of its failures to support many other Black designers. Jean-Raymond is only the 16th Black designer to join the CFDA’s membership roster, which consists of over 500 people. And as an astute witness of history, Jean-Raymond seems to understand the dizzying reason why labels like Sean John, or FUBU, or Cross Colors, in spite of their cultural relevance and material success, were constrained to a particular moment, and have long since capsized. He understands that to adore those brands today is to be retrophilic. And that, of course, has everything to do with the fact that those designers were Black.

It took Telfar Clemens 15 years to be noticed by the CFDA, and even then, he was considered an “emerging designer.” Dapper Dan, the legendary Harlem couturier, only recently absorbed a love that began as a theft, 30 years into his career. And what happened, I wonder, to Charles Harbison, the brilliant designer who launched a collection in 2013, whose clothing was worn by Beyoncé and Solange, who was featured in Vogue’s September issue and whose company is now on hiatus, unable to secure adequate funding to stay afloat? “The fact that I’m not showing new work every season with my name on it, yes I do mourn that. It’s my heart calling,” Harbison told Business of Fashion, in June. It is not the responsibility of the industry to sustain these designers, but history interferes with such pragmatism.

The promise of Pyer Moss, and the fashion industry’s embrace of its racial vantage point, and its newfound position in the cultural conversation, are all part of a slow march of progress. It helps that the clothing is captivating. A Pyer Moss show is a sensory experience: Gospel choirs, swathed in white, sing “Be Real Black For Me,” or “Every Nigga Is A Star,” as the rain pours. Jean-Raymond recently introduced womenswear, and has already proven to be fluent in its beauty. At his last collection, the second instalment of his American, Also series, he showed ecclesiastical garments scrawled with short missives: “SEE US NOW?” one read, and another, “Stop calling 911 on the culture.” It isn’t hard to imagine the place Pyer Moss might have had when the CFDA/Vogue Fashion Fund was created, in 2003. It doesn’t matter. We’re here now.

Mandatory Credit: Photo by Madison McGaw/BFA/REX/Shutterstock (9754538j) Kerby Jean-Raymond Kelly Oubre Jr X Hawthorne Barbershop Party, New York, USA - 10 Jul 2018
Get the best of FASHION in your inbox Thanks for signing up!
The latest fashion, beauty and celeb news delivered right to your email #FASHIONforall Now, check your inbox to complete your subscription
We won’t ever use your email address for anything else
Want even more FASHION? Follow us on social media.