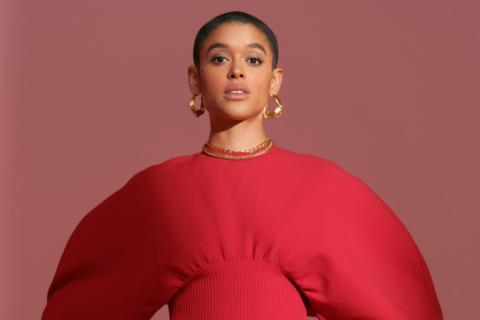 Catch up on the Canadian fashion news you might have missed this week.

From a modelling turn by one of the stars of the Gossip Girl reboot to a sustainable collection made entirely of upcycled and recycled materials, catch up on the Canadian fashion news you might have missed.

It’s shaping up to be a big year for Toronto-based actor and musician Jordan Alexander. In addition to fronting Holt Renfrew’s new Spring 2021 campaign in looks from fashion houses like Valentino and Bottega Veneta, the 27-year-old is one of the leads in the forthcoming HBO Max reboot of Gossip Girl. Alexander plays high school student and influencer Julien Calloway in the series which is currently filming in New York City and will be released later this year.

The theme of Holt Renfrew’s Spring campaign is Empowering Self-Expression and includes a video of Alexander singing a rendition of the Canadian classic, “Lovers in a Dangerous Time,” created in collaboration with Haviah Mighty.

Founded by Toronto-based creative Tristan Cole, ATYPIC is launching its debut collection, called / ENTROPY /, on Sunday, March 7. The brand has sustainability at its core — the collection uses entirely upcycled and recycled materials, and the brand’s mission is to generate a low CO2 footprint in clothing. Cole taps into his experience as a graphic designer for inspiration, using striking graphics and intricate techniques in the design and construction of the garments which includes reclaimed denim and modular bags.

Toronto-based visual artist and scientist Radha Chaddah’s story is nothing if not unique: She holds degrees in film and art history, and has a Masters of Science in cell and molecular neurobiology. Known for making art about invisible realities like the cellular world and electromagnetic energy, using light as her primary medium, Chaddah’s latest creation is a multimedia work inspired by the pandemic.

Told in four acts through dance in light, the first act, IAM: Dance of the Molecules, is a five-minute film developed in 2020. It premieres on March 5 as an Aga Khan Museum digital exhibit and is free to visit.

Chaddah’s work marries art and science, while often incorporating fashion (one might even say this digital exhibit is reminiscent of Alexander McQueen). Incidentally, Chaddah also created the projected installation backdrop for a trench coat shoot in the March 2021 issue of FASHION Magazine. Read the cover story here.

Photography courtesy of Holt Renfrew
Get the best of FASHION in your inbox Thanks for signing up!
The latest fashion, beauty and celeb news delivered right to your email #FASHIONforall Now, check your inbox to complete your subscription
We won’t ever use your email address for anything else
Want even more FASHION? Follow us on social media.