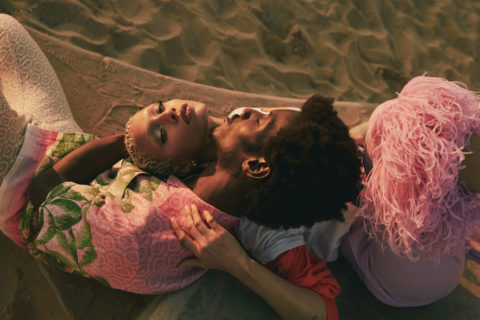 Owning their uniqueness is what pushed our March cover stars to the top of the modelling game.

Adonis Bosso was in the priority line to board a recent flight from Paris when the gate agent waved him away. “‘I’m SkyPriority,’ I said as I showed her my pass,” he recalls. “And she looked at me like, ‘Really?’” That’s just one example of the daily micro-aggressions Bosso says he faces as a Black man. But speaking via Zoom from his home in Toronto, where he was quarantining after returning from FASHION’s cover shoot in Los Angeles, he conveys the incident with such nonchalance, and such a lack of anger or bitterness, that it’s clear that racism is as routine to him as brushing his teeth.

He also faced it, though in a more systemic way, when he began modelling in the early 2010s. “I would often be the only Black model in a show or campaign,” says Bosso, who is casually dressed in a grey Zara track suit with a smoky-topaz pendant that matches his skin tone. “There was not much diversity on the runways or in the industry.” That meant there wasn’t much demand for models with his “look” so agencies didn’t have more than a token few people of colour on their rosters. Bosso was lucky to have found a niche in Montreal, where he grew up, earning $700 a day shooting for Ssense.com. But he was rejected by every agency he visited in New York and Europe.

Jazzelle, who is best known by her Instagram handle @uglyworldwide, found similar barriers when she started modelling in her hometown of Detroit. “They kept telling me: ‘You’re a light-skinned, curly-haired girl. You can’t do high fashion. You don’t have the body or the face for it,’” she recalls, also via Zoom, while sipping tea in her Brooklyn apartment, an industrial space with a grid of exposed pipes hanging from the ceiling. After graduating from high school, she moved to Chicago, where her sporadic jobs were for department stores like Sears. At the same time, she became known in the LGBTQ+ nightlife scene for her drag performances. “You don’t need to be a man in a dress,” she responds when asked for her definition of drag. “It’s a hyper-real version of whatever you feel deep inside.” When her agency told her that her lifestyle wasn’t going over well with clients, she walked.

Both models were so demoralized that they took drastic steps. But that’s when their luck changed. Jazzelle shaved her head and eyebrows. A week later, influential British photographer Nick Knight scouted her on Instagram and then flew her to London for a Comme des Garçons shoot for AnOther Magazine.

Bosso, in Paris on a fruitless hunt for an agent, decided on the spur of the moment to get a septum ring. He later returned to New York and got offers from agents left, right and centre. He signed with DNA Model Management, followed by agencies in Milan and London. “I think it made me interesting,” says Bosso, who has since added “musician” to his skill set. “It started the birth of a character.” He chose @septumpapi for his Instagram handle and turned himself into a cartoon for the fall release of his song “No More.” He conceived, wrote and storyboarded the anime-style music video, which also features model Slick Woods, the mother of their two-year-old son, Saphir.

“His mom and I are no longer together, so this way Saphir can see his parents together as superheroes flying around,” explains Bosso. He is planning a full visual album and action figures based on himself and Woods. “It’s given me a new universe of creativity.”

“Adonis is so artistically inspired that it has led him to be an outstanding model,” comments Tony Craig, a freelance creative director who now runs DNA Model Management’s men’s division. Before becoming Bosso’s agent, Craig and his partner, photographer Idris Rheubottom, worked with Bosso on commercial and editorial shoots. “He was our muse for many years. We did some of our best work with him. He is not afraid to help create a vision.”

Having a voice, and using it, marks a major shift in what a model is expected to bring to the table. “It has changed so much,” comments Jazzelle’s agent, Luiza Zyskowska, who’s with The Society Management in New York. “It’s not just about having the right height and size; clients are looking for a lot more depth. A beautiful face will only get you so far. There’s so much more to it these days.”

“Models shouldn’t be there just to be your playthings, to be dressed up like dolls,” declares Jazzelle. “We’re real people, with real opinions, and a lot of us have real taste. A lot of us are artists.”

Jazzelle is wearing a giant teddy hat by Ottolinger (“one of my favourite brands right now”) and a pale-blue oversized coat from her friend, stylist Anna Trevelyan. Her voice is gravelly, thanks to a few days spent marking her 25th birthday, and her delivery is as feisty as her look. But she has a lot to celebrate: Over the past year, she has racked up campaigns for Fenty, Fendi, Gucci Beauty and Maybelline New York and her Instagram following has swelled to 600,000+.

Jazzelle’s platform is a showcase for her art, for which she largely uses herself as a canvas. “I like to switch it up and do really exciting things with my face and body,” she says. “I like to keep it fresh and new; I need change.” Her transformations can range from surreal alien to sexy skater girl. And her body is a work in progress, too. She had a breast reduction: “Since I’m gender fluid and a bit androgynous, having huge tits didn’t feel like me.” And she’s removing the tattoos from her upper body, replacing them with white stick-and-poke “hieroglyphics” from a language that she and Grace Neutral, a tattoo artist in London, created from Japanese and Russian characters and numerical symbols: “There are important dates, places and times. It’s my short life story in code.” She’s keeping the bandage, stitches and other markings on her legs, though. “I think it’s important to fall down and get back up and have fun while you do it,” she says. “That’s the story my knees tell.”

Her name, Jazzelle, is a combo of her parents’ interests: “jazz” for her dad and “elle” for the magazine. Her mother, a retired nurse, is originally from Toronto, and her father sells school books around the United States and is a jazz singer and pianist. Jazzelle’s creative leanings began to emerge when she was a child. “The only things I cared about in school were art class, lunch and recess,” she recalls. “I got made fun of a lot and didn’t fit in. I was an awkward, weird kid so I don’t know if I was made fun of for my personality or my looks. I remember feeling very insecure about myself all the time. But I still carried on dressing how I wanted and being a weirdo.”

She created the term “Uglyworldwide” after an artist friend remarked that a series of portraits she had done was ugly. “I took that and ran with it and started tagging my paintings and drawings Uglyworldwide,” she says. “I like for everyone to take whatever meaning they want from it because it means something different to everyone. I don’t call myself Uglyworldwide because I think I’m ugly—but sometimes I do. It’s ups and downs with self-confidence.”

“I think it’s genius,” says Bosso of Jazzelle’s “ugly” persona. “The word ‘ugly’ brings out so much emotion.” It also lines up with how society is shifting away from narrow definitions of beauty set by the fashion elites, he adds. “We are no longer seeking to be perfect. We are seeking to be ourselves.”

The meaning behind Bosso’s given name, which is pretty much the opposite of ugly, has even more weight. His parents lost a son, also named Adonis, when he was a month old. The second Adonis became ill when he was young, so the family hightailed it out of the Ivory Coast to seek better treatment for him and wound up in Sweden and then Montreal. “They never told me what the illness was, only that it was life-threatening,” he says.

His parents went on to have five more children, including brother Steve, who is autistic, so special needs is the path that Bosso thought his career would take. In 2014, the family created the Centre d’Intégration TSA, a centre that provides support, information and respite for people with autism, in Montreal and aims to open a second one in Toronto.

Bosso, meanwhile, is working on his music career while adding to a lengthy client list that includes Adidas x Ivy Park, Topshop, Levi’s and H&M. His latest campaign is with Saphir for Zara.

Jazzelle is spreading her wings by contributing more on shoots. “Now I’m not just hired to be a model; they ask me for creative input,” she says. She did a collab with Gucci Beauty last summer and recently did her own makeup for a print editorial. “Being more involved as a model and an artist at the same time is a big turning point in my career. I want to be a part of the creative process, and that’s something that is happening. My art is being respected.”

Photography by GREG SWALES. On Bosso: Top and pants, prices upon request, Casablanca. Necklace, price upon request, Misho. On Jazzelle: Tops, vintage. Pants, $2,340, Patou. Earrings, $85, Kendra Scott.
Get the best of FASHION in your inbox Thanks for signing up!
The latest fashion, beauty and celeb news delivered right to your email #FASHIONforall Now, check your inbox to complete your subscription
We won’t ever use your email address for anything else
Want even more FASHION? Follow us on social media.