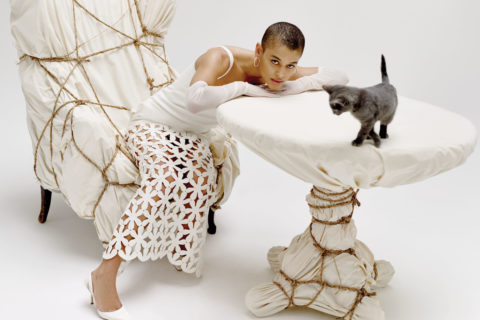 Canadian Gossip Girl Star Jordan Alexander Is Something to Talk About

The May 2021 cover star on style, staying true to herself and being a new Gossip Girl.

Jordan Alexander has some very big — and fashion-forward — shoes to fill as part of the Gossip Girl reboot coming to HBO Max this year. But she has done her best to turn any jitters into an advantage. “I always try to channel any intimidation I might feel into an energy that empowers me rather than makes me cower,” says the Vancouver-born, Toronto-raised talent over the phone as a siren wails faintly outside the window of her New York apartment. She moved to the Big Apple when shooting for the show began last year, although she says she hasn’t been able to fully explore it due to the pandemic.

And she has first-hand knowledge of why it’s so critical that she stay close to home. Alexander’s sister Sydnie is a nurse who has been working on the front lines throughout the COVID-19 crisis; the actress, of course, extends a heartfelt thank you to health-care workers. And it’s Sydnie we should thank for urging Alexander to take up acting in the early 2010s. Since then, she’s had roles in several productions, including alongside Juliette Lewis in last year’s Sacred Lies, in which she demonstrates her acting and singing chops. Music, not acting, was initially her thing. Her debut album, The Lonely Hearts Club, was released in 2016; she has toured Canada with Bif Naked, performed alongside Carly Rae Jepsen and opened for Kehlani at Pride Toronto; and her most recent single, “You,” came out last summer. Alexander took guitar lessons when she was a preteen, and her parents even gave her a drum set when she showed an interest. Her mother — whom Alexander describes as a “free spirit who loves the arts” — volunteers at a therapeutic riding stable for people with special needs, and her father is a musician. “We play guitar together when we can and love to sing together,” she says.

Gossip Girl promises to further showcase Alexander’s range and charisma; in it, she plays Julien Calloway, a character who “brings the drama with fashion.” In an image leaked during the first season of production, Alexander appears in a corseted, bustled gown by New York-based designer Christopher John Rogers, who won the CFDA/Vogue Fashion Fund award in 2019. It’s a couture-style contrast to Alexander’s punky haircut, signalling the contemporary spirit of the new Gossip Girl’s aesthetic and narrative ambitions. “I do hope that it provides escapism; I feel confident that it will,” she says, noting that she re-watched all six seasons of the original last year. Alexander and her co-stars, including Evan Mock and Whitney Peak, embody a sense of relevance that’s imperative to making the aughts’ prime-time hit work for today. “There’s going to be an osmosis of sorts in terms of the diversity of the cast and challenging social norms and the status quo,” she explains. “So while you’re in this escapism vibe, you’re still absorbing important lessons that I think are instrumental in terms of progress and change at large. Good art does that.”

Publishing phenom Tavi Gevinson also has a role in the show: the reportedly “ambitious” Kate Keller. As a young fan of Gevinson’s Rookie, Alexander says she was slow to admit to her colleague how much the magazine meant to her and that she ardently recommended it to any customers she crossed paths with while working at a Toronto location of Book City. “It was so well curated and full of art and interesting things,” she says, noting that, unsurprisingly, Gevinson is “very strong and brave and fearless in the way that artists are.”

Alexander, who is of German-Irish and mixed African-American heritage, emanates a similar sense of integrity and self-awareness. When discussing her shaved head, she says with a laugh that she “really didn’t care” about making the leap a decade ago. “My older sister didn’t think I would do it, and my younger sister said my mom cried,” she recalls. “I don’t think my dad cared at all [laughs]; I don’t think my grandpa cared either. My grandma thinks it’s cool but likes it ‘just a bit longer.’ Most of the time, I completely forget that it’s even there — or should I say ‘not there’? When I first did it, I don’t think I was necessarily as confident in my choices as I am now. But what I felt mattered so much more.

“It was great,” Alexander goes on to say about the moment her then girlfriend helped her make the tonsorial transition, noting that she “wanted a hairstyle that required little to no maintenance” and that this is what motivated her to embrace a sheared look. “I got into the shower and I’ll never forget the feeling of touching my shaved head for the first time,” she says. She adds that there’s a gap in her acting resumé that coincides with the bold move. “I didn’t feel like I wanted that anymore,” she says. “I was really into making my music, and I pretty much let go of acting.”

But Alexander has come back with an assured sense of comfortability in doing her own thing — on her own terms — that seems to pervade all corners of her life. It’s no surprise to hear that she considers multi-hyphenate Janelle Monáe a style icon. Alexander’s own fashion tastes favour the work of Toronto’s @TheyCallMeSoftHoney on Instagram, The Hundreds and Indigenous-owned labels like OXDX, and she touts the offerings of Black-owned personal-care business Garner’s Garden. She also says that she’s a big thrift shopper and that her approach to style ties into supporting value-driven independent labels.

Her passion for supporting such brands could easily be linked to her grandmother, Penny Heaton, who owned her own boutique called Images decades ago. “She is so incredible and such a trailblazer in fashion as well as in life,” says Alexander. Her own style awakening started with playing dress-up in Heaton’s lingerie and loungewear pieces. “I was definitely influenced by her a lot,” she says. “My little sister and I would go into her closet and wear all her clothes; they were so glamorous and fun, and we didn’t care that none of them fit.”

With her newest character, Julien, Alexander appears to have the ability to act with authenticity. This steadfastness will serve her well as she navigates her public profile and the trappings that come with it. She says that she wants to augment the efforts of Indigenous activists who are fighting to protect natural resources and gain access to clean water in their communities.

“I have a solid group of radical people around me who will definitely check me and make sure that I’m staying true to my course and what I believe in,” says Alexander. “I feel like Spider-Man: ‘With great power comes great responsibility.’ But it’s true! And I embrace that.”

Photography by ARKAN ZAKHAROV. Dress, $11,145, Valentino. Shoes, $870, Manolo Blahnik. Earrings, $7,340, Anne Sisteron. Gloves, $90, Carolina Amato. Coat, $3,445, top, $1,365, earrings, $495 each, and necklace, $565, Balenciaga.
Get the best of FASHION in your inbox Thanks for signing up!
The latest fashion, beauty and celeb news delivered right to your email #FASHIONforall Now, check your inbox to complete your subscription
We won’t ever use your email address for anything else
Want even more FASHION? Follow us on social media.