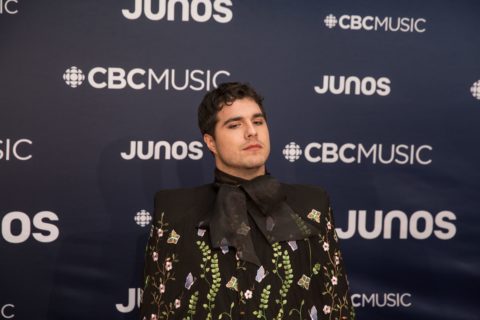 If you aren’t yet acquainted with Jeremy Dutcher, here’s your chance.

The 28-year-old classically trained tenor scooped up the Polaris Prize last year for his debut album Wolastoqiyik Lintuwakonawa, a haunting pop album sung entirely in Wolastoqey, an ancestral Indigenous language with less than 100 fluent speakers alive today, and just picked up the Juno award for Indigenous Album of the Year. Dutcher makes the kind of complicated-yet-emotionally resonant music that has earned artists like Joanna Newsom a cult of devoted super fans. And while Dutcher has received plenty of accolades based on his music, we’d like to give credit where credit is due: his incredible sense of style.

On Sunday, Dutcher arrived at the 2019 Junos ceremony at Budweiser Gardens in London, Ont. wearing a floor-sweeping cape embroidered with a spray of floral blooms that can only be described as ‘majestic.’ It was André Leon Talley meets Joseph and the Technicolour Dreamcoat meets ‘Florals for spring? Groundbreaking.’ (Not to mention it bore a serious resemblance to Valentino’s 2016 Resort collection, designed in collaboration with Indigenous artist Christi Belcourt).

“I love the drama of a cape,” Dutcher says when reached by phone Tuesday afternoon. “I wanted it to be a living piece of art.” Dutcher worked closely in collaboration with Canadian designer ZOFF and Edmonton-based Indigenous designer Luxx to create the custom-designed cape, whose resemblance to Christi Belcourt, as it turns out, is only incidental.

“As soon as I saw the cape for the first time, I was like, ‘It’s kind of like a Christi Belcourt painting,’” Dutcher says. “I showed ZOFF the references and then through searching, we found she had done this whole fashion collaboration with Valentino. Neither of us knew that. For me, I wanted to talk about land and the importance of that relationship to who Indigenous people are. Whether it’s the Metis nation or the Inuit people or Wolastoq people like myself, we all bring our different understandings and connections to this place we have called home for a very, very long time. Our languages and our cultures spring from this place, this land. That was the message that I wanted to bring with this look.”

The inside of the cape was printed with Cree letters spelling out, “We will succeed.” Dutcher points out that 2019 is the UN International Year of Indigenous Languages, and wanted to highlight the significance of protecting said dialects. “In the language I speak, there are less than 100 fluent speakers left. We’re in a really critical moment right now. We have to work hard to preserve our languages and put them on national stages.”

Of the cape’s silhouette, Dutcher says, “I was like, ‘Let’s be dramatic. Give me a Grace Jones shoulder. Make it striking.” In addition, he notes that the ruffles on the sleeves and the pilgrim buckles on his boots were meant to signify “a reclamation of these really colonial forms of fashions, and certainly a queering of them as well. For me it’s really important to go out there and show that two-spirit people, and LGBTQ people who are also Indigenous, are very important to the communities we belong to.”

“As queer people, [myself, and ZOFF and Luxx] are bringing an aesthetic that I don’t think the media landscape or Canadians are necessarily ready for, but we’re going to get them there. We’re just going to show them what we bring and if they’re ready, they can come on board.  And if not, we’re going to keep bringing it.”