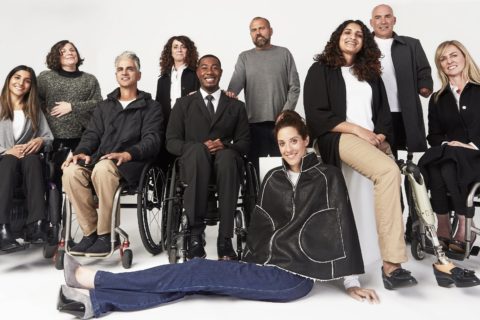 In 2016, when designer Izzy Camilleri announced she would be shuttering IZ Adaptive, one of the first-ever high-fashion adaptive clothing lines, people were shocked. Not only were her loyal customers distraught, but industry advocates raised their eyebrows at the decision to pull out of a category that Camilleri had almost singlehandedly pioneered. Since then, adaptive fashion has flourished, with big brands like Tommy Hilfiger and Nike all launching their own adaptive lines. Now, Camilleri is back and launching the next version of IZ Adaptive, which is available on her website today. We talk to the beloved designer about what happened to her line, the adaptive fashion renaissance, and why she decided to make a comeback.

First things first, why did you decide to shutter your line in 2016?

We basically needed to restructure. We were producing inventory but we couldn’t maintain the same price point producing locally if we wanted to wholesale. At the same time, admittedly I was exhausted. Its not like if you start up a makeup company, where you’ve got all these other companies that you can look to as role models. It was challenging to start this from nothing and just working my way through this in the dark was hard.

When we did announce the closing there were a lot of very sad customers. A lot of people thought we went bankrupt or were closing for financial reasons and that wasn’t the case at all. When we sent out the [closing] announcement, practically ever single response we got, first everybody was really upset about the closing and didn’t know what they were going to do, but then everybody was thankful and grateful for what we did and wished us the best. It was very, very gut wrenching at times reading how grateful everybody was.

So how did you decide it was time to relaunch IZ Adaptive?

Last summer, one of my former customers, a wheelchair user who owns a marketing company was hired as a consultant by Zappos.com and asked me if I’d be open to getting on a call with them and sharing some of my experience and knowledge about the adaptive arena. During this first initial call they asked me if I’d ever consider coming back. They said, ‘What if a retailer like us were to consider purchasing from you, would you consider coming back?’ And first I was like, ‘ehhh no,’ because it was such a big ask. But then the more I thought about it, if a retailer like Zappos is on board it could mean the start of being able to create the model we wanted to create. So that was the spark. Then I realized if I’m going to do this, I’ve got to do this for me. And what that meant was opening my own line again and building it and taking from there.

What is different about Iz Adaptive this time around?

We are producing offshore, mostly in China. We used to get a lot of people complaining about our prices, but they reflected the cost of manufacturing locally. I’d love to keep it local, but I just can’t do it. The only way to offer competitive pricing is to produce offshore. Now, our prices are going to be a tiny bit less than what they were previously, so we are going to be able to scale better than we did before.

Before, I was specializing in clothing for a seated frame, or wheelchair users. But we got a lot of people wanting adaptive clothing who were not wheelchair users. They still needed clothing that was easier to get on, say, if they lacked dexterity for example, or needed help in dressing. Now I have a standing offering, so we’re able to serve people with both seated and standing frames.

The category of adaptive fashion has expanded exponentially since you first started Iz Adaptive in 2009. Do you ever feel like Iz Adaptive was too ahead of it’s time to properly thrive?

Knowing what I know now, it will probably be easier [to gain a foothold in the market] now that there is a light being shone on this area. One of the biggest challenges of marketing to this category was, just because two people have a disability doesn’t mean they’ll be looking at the same things. Back when I started nine years ago, social media wasn’t what it is today. Instagram didn’t exist. So we had to find other ways to reach our customers. What’s great about social media is that whatever you’re into; fashion, hunting, golf, whatever, everybody has a Facebook page or Instagram. So now it is much easier to find our customers through social media than it was previously. So coming back into the arena, I feel stronger. The people coming into [the adaptive fashion arena] now have no idea what they’re getting into, but it’s likely easier for them than it was for me.

Why is the timing right to relaunch now?

What’s great about now is that Tommy Hilfiger, Nike, Target, Under Armour, all these big brands are shining a light on [adaptive clothing], whereas before I was sitting in the dark by myself. There were other small companies, but we were just too small beans for mass market to pay attention And now that these bigger brands are doing it, it kind of validates the category and opens it up. A lot of our customers didn’t even know there was such a thing as adaptive clothing. The more brands that come into it, the more people become educated about this type of clothing, that its out there for you, to make your life easier and to give you options you never knew you had.

Photography Courtesy of Iz Adaptive
Get the best of FASHION in your inbox Thanks for signing up!
The latest fashion, beauty and celeb news delivered right to your email #FASHIONforall Now, check your inbox to complete your subscription
We won’t ever use your email address for anything else
Want even more FASHION? Follow us on social media.