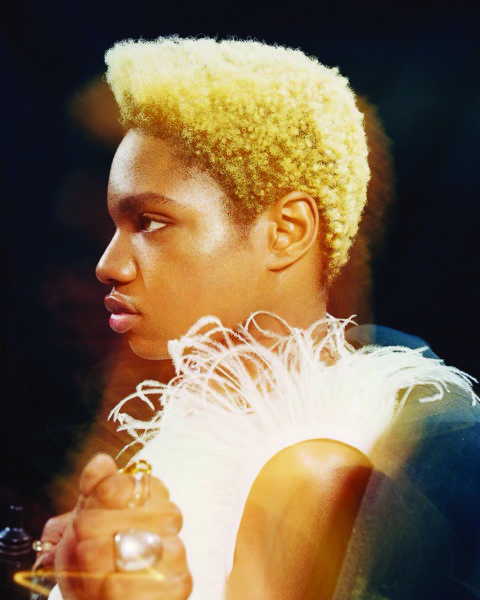 me by @heatherhazzan for @modelcitizensvote, styled by @josephcharlesviola ❤️ model citizens vote is a national instagram based campaign to bring out the youth vote to support democratic candidates for congress on November 6t​h. before we can ultimately defeat trump in 2020, this is what’s happening now! i encourage y’all strongly to also become a part of this campaign by spreading the word and getting your friends & loved ones involved, especially via social media! visit modelcitizensvote.org and/or follow @modelcitizensvote to be a part of this dialogue ? xx

Model Aaron Philip possesses an angelic smile that reveals perfect Chicklet-white teeth and virtually poreless skin that seems to radiate from the inside. With the addition of a sassy septum ring, she’s the very picture of a supermodel, only she uses a wheelchair. Oh, and she’s trans. Diagnosed with quadriplegic cerebral palsy when she was a baby, Philip got her start on Twitter less than a year ago when she tweeted, “honestly when i get scouted/discovered by a modeling agency it’s OVER for y’all!” Since then, Philip has landed editorials in them, the queer sibling of Teen Vogue, Refinery29 and ASOS magazine. It’s her goal to walk all the big runways like Gucci, Prada, Dior and Maison Margiela because, in her own words, “there’s no reason not to.” Philip’s drive and ambition stems from her desire to carve out space for proper representation because, as she says, “Never have I once seen myself properly represented on a big platform, a runway or a beauty campaign.” If she continues to manifest her dreams with the power of a gale force, it won’t be long.

The bio of Kathy D. Woods’ Instagram profile reads as fairly typical for any Midwestern American woman, that is, until you reach the last descriptor: “Christian woman, wife, mother and first African American fashion designer for little people.” Growing up in Cincinnati, Woods watched her mother struggle with a sewing machine to alter the proportions of her clothes. (Woods is the only Little Person in her family.) As an adult, she found herself in a similar situation, frustrated by the costly alterations required to make off-the-rack items fit her diminutive stature. “It’s like paying double for the garment,” the designer quips. The solution? Start her own clothing line that transforms the process of shopping as a little person from a heavy burden into an unbridled joy. Woods’ launched her line, which features bold leopard print wrap dresses and ruffled tops in 2014, and since then she’s been invited to the Obama White House – twice. First as a guest for the 25th anniversary of the Americans with Disabilities Act, then for an event celebrating inclusive design. Woods acknowledges she’s operating in a niche market – achondroplasia affects 1 in 15,000 people – but that doesn’t dampen her goal to create beautiful, fashionable clothes for short-statured women. “I may be little but I’m mighty. I don’t allow anything to stop me,” she says.

According to Tommy Adaptive, the label’s mission is “to use fashion as a starting point for changing how the world is designed.” Founded in 2017, the collection spins Tommy Hilfiger’s Americana-inspired designs into a sophisticated selection of polo shirts with magnetic snaps rather than buttons, frayed denim skirts with velcro closures as opposed to buttons, and sporty bomber jackets with magnetized zippers.

These small modifications may not seem like much, but they offer independence and autonomy for people with disabilities by mitigating the dressing challenges they face. “People don’t understand the importance of fashion in someone’s happiness and self-esteem,” says Christina Mallon, a board member of Open Style Lab at Parson School of Design. Most adaptive clothing available on the marketplace has a distinctly medical bent to it, which doesn’t reflect that “someone with a disability can be fashionable, can be fun and cute and dateable,” says Mallon, whose arms are paralyzed from motor neuron disease. She suggests that adaptive clothing hasn’t gone mainstream yet because most brands don’t realize how big the marketplace is. Globally there are 1.2 billion disabled people in the world with a combined discretionary income of $1 trillion to spend. “I really think adaptive clothing is the new plus size,” she says. Tommy Hilfiger himself writes over e-mail, “After more than 30 years, my original vision for the brand of inclusivity continues to guide the way we do business…[Tommy Adaptive] is a reminder of the diverse world we live in and how fashion can be a means to bring us together.”

Sonia Prancho prefers to call her designs accessible, not adaptive. “When people think of adaptive clothing, they think about hospital type clothes,” says the recent Ryerson grad, whose Un-Form collection presented at Mass Exodus comprised of distinctly un-patient-like garb such as kooky translucent capes adorned with hand-painted watercolour flowers, and strappy crop tops. Prancho practices human-centred design, which focuses on how a garment can be made most valuable to its wearer. “I’m not just creating clothes that are going into H&M or Forever21 and are going to fade out in the next few days. I want my clothes to have a meaning and have a purpose and still be functional and fashionable,” she says. Un-Form incorporates details like magnets, snaps and Velcro with soft and stretchy fabrics that allow for maximum flexibility to accommodate people with a varying range of abilities. One of her more ingenious designs is a pair of billowing wrap pants that go up and down in size to accommodate patients whose weight fluctuates under the influence of medications. Rather than trying to hide adaptable elements like zippers and snaps, Prancho chose to emphasize them, contrasting muted black fabric with a hot pink zipper. “If you have a disability, you might as well own it,” she says.