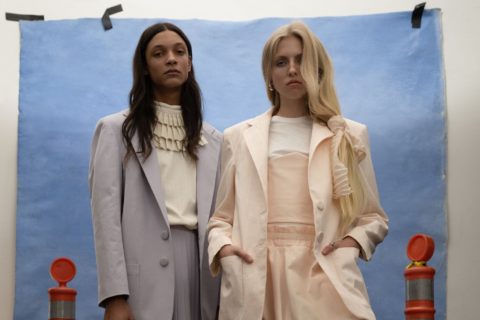 The designer has moved to seasonless collections, and is using off-cut materials to make face masks.

“I’ve been trying to talk to and motivate other people that this is a good change. We really needed this pause; why don’t you just try to be positive and see how you can improve and how you can educate yourself, and live differently?” Designer and creative director Dorian Rahimzadeh is reflecting on how COVID-19 has affected her outlook on life and her business, the eponymous ungendered brand she launched last year and has since re-conceived as a seasonless collection.

Rahimzadeh, who is based in Toronto and recently did a self-isolation diary for our site, moved to Canada after growing up in Iran and studying fashion in Turkey at an outpost of Montreal’s LaSalle College. “When I moved to Toronto, there was a total culture shock,” she says. “It was a completely new place for me. I was familiar with European culture, but not North American culture.” She admits that she didn’t like being in Toronto for the first few months because of this distinct shift, but through the encouragement of working on projects such as Xposed (helmed by FASHION’s George Antonopoulos) and being named on Toronto Life’s Best Dressed List, her creativity was nurtured and she decided to forge ahead with her design work here.

In addition to working on her flamboyant sartorial creations crafted with deadstock fabrics and featuring exaggerated silhouettes, Rahimzadeh has also built up a large following on her personal Instagram account; and she has used her platform recently to speak out about the Black Lives Matter protests. “I personally feel very connected [to this] because I grew up in Iran and it’s one of the most horrible countries to live in. I still think I belong to Iran, but I have zero tolerance and zero interest to go back. Toronto is my new home, and I’m trying to be a new Canadian,” she says. “When the protests started, I was really interested to see how people react. [Iranians] haven’t seen the same racism but we’ve seen violence; I have with my own eyes. I realized that people can get together and have this power to connect and spread love. I’m trying to learn, and I’m trying to find a way to collaborate with people to see how we can help the movement. This is not something that we can see and then forget about. That’s something that happens with Iran; we see so many tragic stories and people will post about it, and then the next day everything is like a new day. I’m happy to see that people are still talking about it, and educating other people. It’s a beautiful movement.”

Using public profile to draw attention to world events and encourage change is certainly the best use of influence, but Rahimzadeh is hesitant to claim that title for herself. “I don’t like the word ‘influencer’ but I call myself that because I don’t know another word for it,” she says. “But a lot of people get inspired by my life. I’m trying to be active and show them that this isn’t the time to get depressed; you need to appreciate this time and do something for yourself and other people.”

This proactive and confident attitude also prevails in how Rahimzadeh sees her role in the Canadian fashion landscape, noting that when she launched her label, some people told her to move in order for her to make an impact. “I thought, I have energy to actually help the fashion industry,” she says of why she’s stayed put. “I’ve become obsessed with researching and helping. I feel like emerging people have the power to get together and help to build a more sustainable industry with more job opportunities. [And] I’m thinking about how I as a newcomer with a lot of energy can help the Canadian economy.”

Rahimzadeh is also channeling her ambitions into crafting a better-run business; she’s used off-cut materials from her collections to create accessories and face masks, and says her seasonless style of designing will allow her to be more meaningful in her process. “At the beginning of COVID, I thought, this is the time. If I’m going to make a change, I need to do it now,” she says of what she’s observed from the wastefulness of the fashion industry as its existed for years thanks to over-production. Instead, she’s focused on maximizing what she’s been successful at, and building on it. “I want to stick to my signature pieces and make them better and better, and try to add more sizes,” she notes.

Progress has always been a partner of creativity, and now that she’s in Toronto, Rahimzadeh feels she’s able to honour her most authentic self; that’s likely where much of her energy comes from. When speaking about her use of bold colours in her designs–which is heavily influenced by growing up around pieces from her father’s Persian rug business–she notes that this is rooted in a self-expression she wasn’t able to indulge while in Iran because of strict government impositions. “It was a negative thing in my life because I always loved colours,” she says. “When I moved here, it was kind of a revolution for me. Canada is a very free country. When I moved here, [it was] the start of my real life; I can wear whatever I want, and I can design whatever I want. I realized I could express myself freely.”

Dorian Who is one of the brands taking part in the Wear Canada Proud Online Shopping Event, presented by FASHION and CAFA, from June 16-17. Click here for more information.