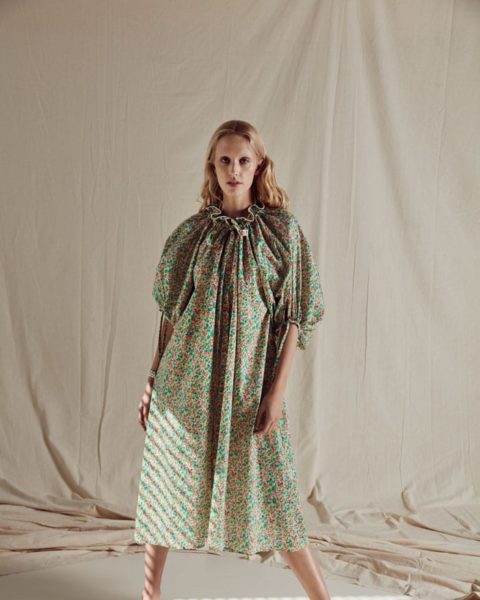 Horror vacui is a Latin term dictating a fear of empty spaces. Not so much physical spaces, but visual ones. Imagine a lushly-patterned Persian carpet or the intricate furrows of a Medieval woodcut — no matter where the eye travels, there’s always something to look at. It’s why people feel compelled to fill blank walls with art, and why houses devoid of furniture can feel so sterile and lonely. Though I’d never heard of the term before, as a compulsive buyer of useless tchotchkes it resonated deeply; which is perhaps why I’m so drawn to the ditsy, calico dresses made by German label Horror Vacui.

Horror Vacui designs roomy, floral dresses that are marked by a sense of uncorruptible virtue. They look like what a five-year-old might wear for a make-believe tea party mixed with the prim sensibility of a teacher at a one-room schoolhouse. Their aesthetic fits in perfectly with the prairie dress trend that’s been cresting for an entire year thanks to brands like Batsheva and Doen, but Horror Vacui lacks the winking irony of Batsheva or the bohemian romance of Doen. Instead, Horror Vacui’s designs seem to be completely free of the sardonic humour that makes prairie dresses remotely wearable in 2019. The only conceivable demographic for these dresses is an overgrown, Laura Ashley-obsessed Kindergartener and yet somehow, I’m completely charmed by the brand’s charming guilelessness.

Something about Horror Vacui’s designs feels utterly pure and uncorrupted by outside influence, as if were the brainchild of some sprightly gnome who lives in a European forest. In actuality, Horror Vacui was founded in 2014 by the entirely human Anna Heinrichs, whose focus on “very detailed and opulent aesthetics” was influenced by the founder of the Arts and Crafts movement William Morris, whose byzantine botanical art perfectly illustrates the concept of horror vacui. Morris also designed some of the earliest prints for Liberty of London, whose fabric Heinrich uses exclusively to craft her confectionary designs. With their scalloped edges and billowing proportions, Horror Vacui dresses resemble nightgowns; Heinrich admits that much of her initial inspiration came from historical illustrations of sleepwear worn by European aristocrats in the 1600s. The brand’s Instagram features a smattering of historical paintings of babies wearing the type of crisp cotton gowns that look like they belong to the brand.

The clarity of Heinrich’s aesthetic vision could have something to do with being headquartered in Munich, Germany. The brand’s lack of proximity to any major fashion city lends it an air of cult-like isolation.

At upwards of 800 smackeroos, I will not be owning one of these frilly, sack-like dresses any time soon. However, I will be filling up any horror vacui in my brain with visions of these intricate designs for the foreseeable future.

Photography by Phil Blandow
Get the best of FASHION in your inbox Thanks for signing up!
The latest fashion, beauty and celeb news delivered right to your email #FASHIONforall Now, check your inbox to complete your subscription
We won’t ever use your email address for anything else
Want even more FASHION? Follow us on social media.