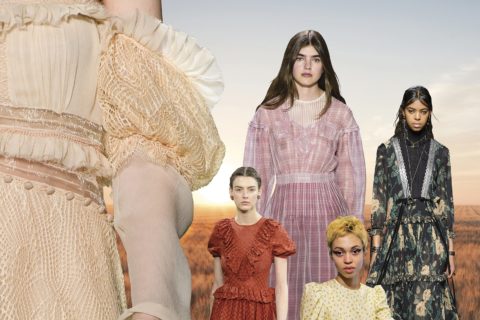 Runway Photography via Imaxtree and Background via Istock
Style

How Prairie Dresses Are Redefining Sexy for the Current Era

In his novella Sell Out, American humorist Simon Rich tells the story of Herschel, a humble Jewish man who immigrates to Brooklyn at the turn of the century and accidentally falls into a pickle barrel. A hundred years later, he is fished out of the brine, not having aged a day, by a band of conceptual artists reclaiming industrial warehouse space. After emerging from his salty prison, Herschel must contend with the absurdities of modern Brooklyn, including blogs, Whole Foods and unpaid internships.

Now, one of the most prominent trends of 2018 is enough to make you wonder if you’ve stumbled into your very own pickle-barrel time machine in reverse. Walk down a major street in any sizable city—or scroll through the virtual town square of Instagram—and you’ll notice an influx of women wearing leg-of-mutton sleeves and frilly pie-crust collars that would likely make Herschel breathe a sigh of relief.

“It’s my party and I’ll be a Quality Street wrapper if I want to…” ??????????? Celebratory copper hues for my birthday with @batshevadress @coach #CoachNY and @chanelofficial

The pioneer—literally and figuratively—of this new homesteader look is Batsheva Hay, founder of the label Batsheva, whose chintzy creations have earned her a spot on the short list for the CFDA/Vogue Fashion Fund award. She began designing dresses after she took one of her decaying vintage Laura Ashley finds to a tailor, who told her it was irreparable. Hay decided to remake the dress, and with a few tweaks to the pattern to update it for the current decade, her nostalgic past-meets-present line was born.

Since then, Hay’s wares have found celeb fans in Natalie Portman, Chloë Sevigny and Busy Philipps. (Somewhat ironically, Sevigny has donned the prairie look as much in her professional life as in her personal life, playing a Mormon sister wife in Big Love and, most recently, the axe-wielding murderess Lizzie Borden, who dons puffed sleeves that would make Anne Shirley hyperventilate, in the film Lizzie.) Batsheva’s pieces have also become the unofficial uniform of arbiters of downtown New York cool. They’ve been spotted on Vogue’s Sally Singer, on The Wing’s co-founder Audrey Gelman and on Hailey Gates, the host of Viceland’s States of Undress.

@tira_tira_tira stood on a desk to take this moody picture of me at work. One thing I'm very into is a commitment to getting the shot!

“Hay’s dresses have a certain familiarity that feels fresh and unpretentious in this post-Celine streetwear climate we’re in right now,” says Jane Aldridge, the Texas-based blogger behind Sea of Shoes, who pairs her prairie dress with furry Chloé slides. Another Batsheva fan, Rachel Tashjian, fashion features editor at Garage magazine, attributes some of the look’s popularity to a rather counterintuitive ease of wear. The dresses might look fussy, but “once you put [one] on, you can almost forget that you’re wearing it—until someone looks at you like ‘Why is that person wearing that crazy dress?’” she says.

“Hay’s dresses have a certain familiarity that feels fresh and unpretentious in this post-Celine streetwear climate we’re in right now.”

At this point, you might find yourself asking “Isn’t it a touch regressive to adopt a style that hearkens back to an era when women were considered glorified property?” Not exactly. Prairie dresses are the epitome of IDGAF fashion; to wear a dress that’s so aggressively old-fashioned it verges on parody is the ultimate nonconformist move. The popularity of prim ankle-grazing styles is concurrent with the rise of modest dressing, which is no longer just the province of religious women who choose to mingle faith with fashion. The current relish for Laura Ingalls Wilder dresses is less a diktat from a villainous cabal of designers conspiring to make women look ridiculous than an autonomous sartorial choice that women (albeit ones who are primarily thin and white) are very much making for themselves.

Look who I got to hang out with today! @jennymustard

Which explains why Batsheva isn’t alone. Rather, it’s among a cohort of emerging brands that includes Bode, a menswear line that repurposes antique textiles into pieces like workwear jackets, and Dôen, a design collective whose sweeping floral dresses skew slightly more Laurel Canyon than American Midwest.

Even the big-name designers are hopping on the covered wagon. Coach has paraded high-necked maxi-dresses with a profusion of ruffles down its runways for the past two seasons—dresses that would read as demure had the models wearing them not adopted an attitude of total hostility. The always-ethereal Ulla Johnson showed modest girlish dresses with voluminous sleeves and crochet details for spring, as did Jonathan Simkhai. Even Raf Simons, the prince of aesthetic rigour, was honoured by the American Folk Art Museum earlier this year for his use of quilts in his designs at Calvin Klein.

Bringing back this beauty from our Spring ‘18 collection very soon! We can’t wait ??? #doencollective #comingsoon #soldress

This widespread embrace of antiquated modes of dress challenges the current vogue for ironic dressing. (See: dad sneakers and Off-White’s dubious quotation marks.) In contrast, glorified prairie dressing is almost painfully earnest. “There’s so much interest and emphasis and excitement and hype around streetwear, and it doesn’t look like that,” says Tashjian. Perhaps the new-found appetite for fuss-budget frills demonstrates women’s desperation for clothing that requires a bit more effort and purpose to carry off.

A PR person once made an offhand comment that Batsheva dresses “are like the official wardrobe of the #MeToo movement,” Hay recounted in an article in Glamour. But it would be incorrect to suggest that correlation equals causation. “I just think women are looking for new directions of how to present themselves in the world,” suggests Naomi Fry, a staff writer at The New Yorker. “Women want to have more options, and [prairie dresses are] now one that looks fresh and cool, young instead of old, hip instead of dowdy.”

It just so happens that this particularly chaste form of dressing—once so retro that one suspected it would be consigned to the metaphorical pickle barrel forever—resonates more with the modern world than anyone could ever have anticipated.