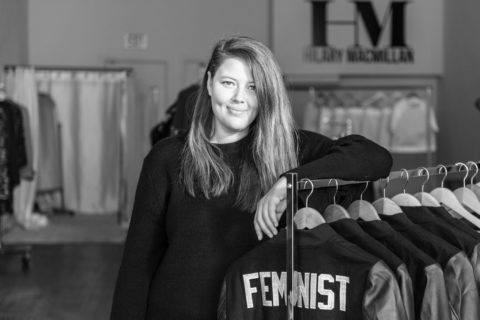 "I felt uncomfortable cutting out leather to make a leather jacket”

Considering the news that Gucci, Burberry, Michael Kors and Diane Von Furstenburg — heck, even the city of San Francisco — have announced they are going fur-free, the discussion about whether or not to use animal products lately has become top of mind in the fashion industry and beyond. Considering the strength of the conversation, Canadian design favourite Hilary MacMillan recently announced that her line – cruelty-free since 2016 – will be phasing out all silks and wools. We caught up with the conscientious designer to discuss the decision and learn more about what exactly it means to be a cruelty-free designer.

“Back in 2013, we were using furs, leathers, silk, and some feathers here and there. Then I made the transition in my own life to become vegan. I was reading a lot about it and I just didn’t like the practices. I felt uncomfortable cutting out leather to make a leather jacket.”

On the avoidability of animal products

“I just don’t think it’s a necessity. A lot of people make the argument for warmth but there are a lot of great substitutes like cotton, poly silk or recycled poly silk that you can get in jackets that are just as warm as a down-feather.”

On phasing out silks and wools

“Silkworms have to be boiled alive in order to extract the silk, so the animal is killed in the process of creating silk. For wool, the cruel part of it is the mass production. A lot of times [sheep are] sheared incorrectly or too quickly, so a lot of their skin will come off along with the wool. Unless you’re working with a small farm, it’s hard to ensure that the sheep are being treated properly.”

On adopting the ‘cruelty-free’ label

“My label is named after me so it’s a personal reflection of who I am as a designer and person. Cruelty-free is a brand value that I’ve adapted because I decided I I didn’t want to work with materials I was uncomfortable with. We called ourselves ‘cruelty conscious’ when we were cutting out our leathers and furs, before we could say we were totally cruelty-free.”

On the difference between the labels “vegan” and “cruelty-free”

On how the cultural climate is influencing business

“There’s a huge vegan movement going on across the world – people trying to switch over to plant-based diets or testing out Meatless Mondays – and this raised consciousness about what people are putting into their bodies transitions over to their fashion choices as well. There’s a big opportunity to grasp on to people that are interested in cruelty-free pieces and see these clothes as something they can stand behind. No one’s been opposed to it yet, so that’s good.”

On what the future holds

“We just got a bunch of Pinatex – leather made from pineapple leaves – in. We’re experimenting and trying to find the best application for it. It’s stiffer leather, you can’t make a skirt out of it, but we’re hoping for jackets – or maybe a leather detailing on a sleeve.”

Photography by Ryan Emberley
Get the best of FASHION in your inbox Thanks for signing up!
The latest fashion, beauty and celeb news delivered right to your email #FASHIONforall Now, check your inbox to complete your subscription
We won’t ever use your email address for anything else
Want even more FASHION? Follow us on social media.