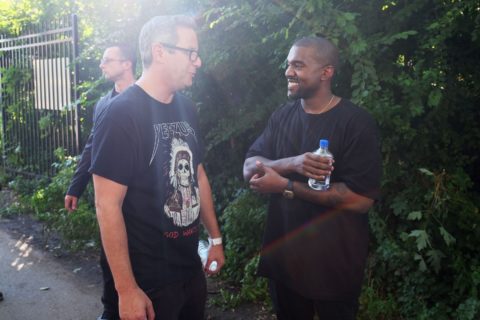 #hypebeastproblems: Will Kanye West be able to expand his popular YEEZY brand? Stay tuned for more information as the story develops. Video: HYPEBEAST

Kanye West Lost the Trademark for his Own Clothing Line

Kanye West’s Yeezy line is so popular, it seems that even Ye himself couldn’t manage to hold ownership of the brand. “Although ‘Ye currently owns the “YEEZY” trademark for footwear, apparently for some reason his company lost “YEEZY” for clothing and other items sometime in 2017,” reports Hypebeast. Now, the Yeezy trademark is owned by a Chinese company called Fujian Baby Network Technology Co and Kanye West might be looking at court time if he wants to continue to expand his brand. This isn’t the only hot water Kanye West las landed himself in recent weeks – last week troubled actor/style icon Shia Labeouf accused Kanye West of stealing his clothes after West paid a visit to Labeouf’s house where they discussed a possible collaboration. “That dude has a lot of my shit,” Labeouf says. (Hypebeast/Esquire)

?? Bill Cunningham left behind a secret memoir ?? my scoop, link in bio

Bill Cunningham, the self-effacing lensman who catalogued trends for the New York Times’ “On the Street” column, had a reputation for modesty, routinely wearing a $20 blue worker’s jacket with khakis to photograph the stylish denizens of New York City. He also, as it turns out, secretly wrote a memoir chronicling his six decades spent as a fly-on-the wall in fashion. Cunningham, born in Boston, began his career as a milliner for wealthy ‘ladies who lunch.’ He later worked as a fashion journalist for Women’s Wear Daily, and was a self-taught photographer, whose columns in the New York Times’ ran in the paper from 1989 until his death in 2016. The memoir, acquired by Penguin Press, is already the most hotly-anticipated fashion book of 2018. (New York Times)

Water is a human right, and we each have a role to play in tackling water scarcity. Today on #WorldWaterDay, we're sharing our new manufacturing goal to conserve 10 billion liters of water by the end of 2020. See how we're doing it through the link in our bio.

Gap Inc. has announced a pledge to conserve 10 billion litres of water by 2020. “Water is critical to nearly all aspects of our business, and we recognize the responsibility and the opportunity we have to reduce the amount of water used to create our products,” Gap’s executive vice president of global sourcing Christophe Roussel said in a statement. To meet their pledge, Gap has created a program called Washwell that reduces the amount of water used in their denim washing cycle by 20%, implemented a mill sustainability program, and close monitoring of the quality of effluent wastewater at its denim washing facilities. (Fashionista)

You inspire me everyday! Your passion and your drive for perfection, your spirit ignites. I love you!! Brother @diddy ?? #blackexcellence #linkinbio

Naomi Campbell will Be Honoured with a CFDA Award

This week, the CFDA announced over Instagram that Naomi Campbell will be the recipient of the 2018 CFDA Fashion Icon Award. The supermodel will be presented with the award at the ceremony taking place at the Brooklyn Museum on June 4th. Other fashion luminaries who will be honoured that evening include Donatella Versace, who will receive the International Award, British Vogue editor Edward Enninful, who will receive the Media Award, and Diane von Furstenberg, who will receive the Swarovski Award for Positive Change. (WWD)

Fur and its place in the current fashion landscape has proved to beone of the most scorching topics of the year so far. Just last week, we covered Versace’s decision to phase out all fur from their brand by 2019. Now, San Francisco has become the first major US city to ban the sale of fur. “My hope is that it will send a strong message to the rest of the world,” supervisor Katy Tang told the San Francisco Chronicle. “I am a huge animal rights advocate, and while in office I would like to use my legislative abilities to help those who can’t speak for themselves.” The ban applies only to new fur, and does not include vintage stores who sell decades-old castoff furs. The San Francisco Chamber of Commerce estimates that the sale of fur accounts for $40 million of transactions a year in the city, and the ban will have a profound effect on the city’s estimated 50 retailers that carry new fur clothing. (San Francisco Chronicle)