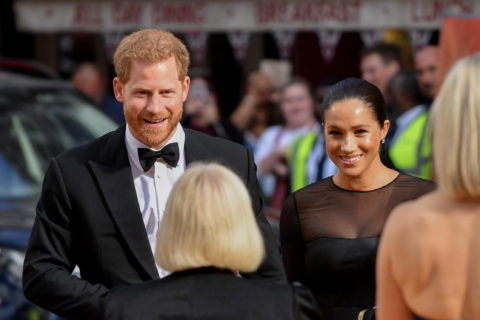 It is expected that the Queen and senior Palace aides will block the use of the name.

Update: It has been confirmed by Buckingham Palace that Prince Harry and Meghan Markle will not use the ‘Sussex Royal’ name after Spring 2020. In a statement, the palace pointed to the UK government’s rules around the usage of the word royal as a key factor in the decision. “While the Duke and Duchess are focused on plans to establish a new non-profit organization, given the specific UK government rules surrounding the use of the word ‘Royal’, it has been therefore agreed that their non-profit organization, when it is announced this Spring, will not be named Sussex Royal Foundation.” They also hinted that the pair will rename their Instagram account when their royal duties officially end, adding, “The Duke and Duchess of Sussex do not intend to use ‘SussexRoyal’ in any territory post Spring 2020.”

Original article (19/02): After stepping back as senior royals, what the future life of Prince Harry and Meghan Markle – who retain the titles of the Duke and Duchess of Sussex – will look like has been largely unknown. What we did know was that pair had trademarked the name ‘Sussex Royal’ for life beyond Britain, however it seems as though they will now have to change course.

Reports are coming out of the UK that the Queen is likely to block the pair from using the name given that they are no longer working members of the royal family. According to Bazaar.com, a royal source explained, “As the Duke and Duchess of Sussex are stepping back as senior members of the royal family and will work towards financial independence, use of the word ‘royal’ in this context, needed to be reviewed and discussions are still ongoing. As part of the process to transition the Duke and Duchess of Sussex into their new chapter – planning has been well underway around the launch of their new non-profit organization. Details will be shared in due course.”

As reported by The Daily Mail, the pair had filed trademark paperwork for the moniker, and also relaunched their website under the Sussex Royal name to coincide with the announcement that they would be stepping back from royal duties.

A formal announcement is expected to made, though it is not yet clear when.

The pair have been keeping busy since relocating to Canada, attending a JP Morgan conference in Miami and attending talks at Stanford University as recently as last week.