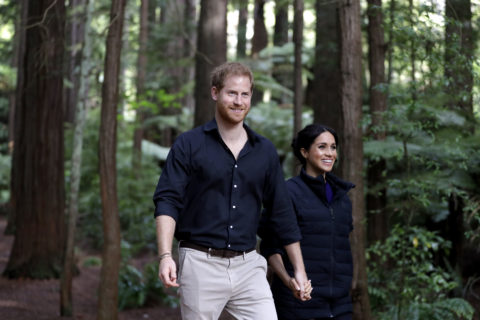 They will officially cease royal duties on March 31.

A spokesperson for the Duke and Duchess of Sussex has just released a statement announcing new details around the pair’s exit plan from the royal family. As per People, Prince Harry and Meghan Markle will cease royal duties as of March 31 and following that date will not hold an office at Buckingham Palace but rather be represented by the team behind their forthcoming charitable foundation. They will however regularly visit the UK to support their various patronages, and the royal family, at special events.

“The Duke and Duchess will be spending their time in both the United Kingdom and North America. In addition to continuing to work closely with their existing patronages as they build a plan for engagements in the UK and Commonwealth throughout the year, the Duke and Duchess have also been undertaking meetings as part of their ongoing work to establish a new non-profit organization. The details of this new organization will be shared later in the year. In general, the themes of their cause related work will remain unchanged, which includes the Commonwealth, community, youth empowerment and mental health, collectively.”

Royal reporter Omid Scobie shed a little more light on the situation on Twitter confirming a large list of upcoming engagements for the pair:

Scobie added that his source said a review will take place in a year. “The Royal Family and Sussexes have agreed to an initial 12-month review to ensure the arrangement works for all parties,” he shared.

Harry will also retain some of his military ranks (Major, Lieutenant Commander and Squadron Leader) under the new agreement, however he will not use his honorary positions over the next 12 months. Interestingly, replacements will not be announced until the 12 month review is completed suggesting that should the plan not work out as intended that Harry and Meghan could resume their royal responsibilities.

The news comes after it was reported that it is likely that the Queen will bar Harry and Meghan from using the Sussex Royal name as they pursue their non-royal life.

Photo by Kirsty Wigglesworth - Pool/Getty Images
Get the best of FASHION in your inbox Thanks for signing up!
The latest fashion, beauty and celeb news delivered right to your email #FASHIONforall Now, check your inbox to complete your subscription
We won’t ever use your email address for anything else
Want even more FASHION? Follow us on social media.