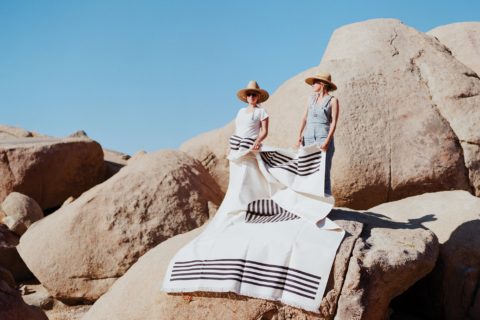 Why Handmade and DIY-Inspired Fashion Is Making a Comeback

“There’s a genuine, living spirit in a handmade thing that makes it worth hanging onto.”

Over three days last December, around 4,000 people visit­ed The Theatre Centre in Toronto for the 11th annual City of Craft fair. It was its busiest yet, with 60 vendors selling handmade goods like ceramic sculptures, crocheted cacti and stained-glass jewellery. It may come as a surprise that in 2018, shoppers are literally bumping elbows to get their hands on low-fi crafts.

“Right now, so many of us have the privilege of accessing whatever we want, whenever we want,” says Kalpna Patel, creative director for City of Craft. A longtime crafter and maker, Patel says the impersonal nature of mass-produced goods has left us yearning for something more. “It reflects a desire to engage with our belongings in a more meaningful and thoughtful way and to know that we’re collecting items of value and quality.”

“Right now, so many of us have the privilege of accessing whatever we want, whenever we want. It reflects a desire to engage with our belongings in a more meaningful and thoughtful way.”

This desire is what drew 32-year-old Rowena Viloria back to macramé. When she and her boyfriend moved to Vancouver from Toronto two years ago, the excitement of decorating their first home together was dampened by the high prices at the decor stores in their neighbourhood of Kitsilano, so Viloria took matters into her own hands and reconnected with the skills she’d learned as a child from her mother. “I decided to start doing macramé again to provide artistic elements to our home on a budget,” she says. “Making the wall hanging by our dining table reminded me of how therapeutic and relaxing it was. I would put on a podcast and start knotting. The reward—being able to create beautiful pieces to decorate our home—is amazing.”

For those lacking Viloria’s talent, purchasing crafts is more accessible than ever through events like City of Craft and London Craft Week in the United Kingdom as well as online retailer Etsy, a key player in spreading the handmade gospel. Designed for vendors of vintage and handmade items, the Brooklyn-based e-commerce platform has grown to more than 1.9 million sellers connecting with about 31 million buyers around the world. Etsy trend expert Dayna Isom Johnson points to the ongoing popularity of customization as one reason why we’re gravitating toward the handmade. “The beauty in handmade items is that each piece is unique and has its own story whether from the making process or the conversation that you have with the maker,” she says.

It’s a movement that goes hand in hand with fashion, says Gary Markle, chair of the craft division at NSCAD University in Halifax. Markle sees the craft economy as a maturation of the DIY movement. “DIY is the gateway into people understanding that a hand-knit sweater is worth a lot of money,” he says. “It helps people to recali­brate what they think the value of something is when they have the experience of participating in that kind of making.”

Whether real or suggested, the aesthetic of craft was all over the Spring 2018 runways. Both Jil Sander and Stella McCartney channelled macramé, while Dior incorporated patchwork and Calvin Klein, quilting. Ribbons turned up at Dolce & Gabbana, Chanel and Christopher Kane and floral needlepoint at Alexander McQueen.

At Loewe, designer Jonathan Anderson continued his signature incorporation of artisanal techniques on pieces like half-shredded trench coats and reconstructed sundresses. In 2017, Anderson, a major proponent of craft, presented the first annual Loewe Craft Prize, a competition that recognizes an exceptional artisan with 50,000 euros. “Craft is integral to design; it’s how you learn what something is about, how it works, about the materials,” Anderson told Financial Times in 2016. “It tells us where we are in a moment.”

One designer creating her own moment is London’s Katie Jones. Feeling distanced from the production process of her colourful pieces, Jones decided to take a different approach to manufacturing, launching her MIY (make it yourself) collection in which she sells patterns for her clothing and household items.

“I have always run workshops alongside my brand and realized that this was something I really enjoyed and wanted to take further,” she says. “I love being able to share my skills and my passion for the craftsmanship.” For Jones, putting production in the hands of her buyers reduces waste, fosters engagement and education and frees her from the restraints of a traditional production schedule. “I really just want to make things that make people smile and don’t have a negative impact on the world,” she says.

Today, there are companies like Jones’s making their own positive impacts all over the world. Block Shop, run by Los Angeles-based sisters Lily and Hopie Stockman, works on block-printed textiles with artisans in Jaipur, where the entire process, from design to dyeing, is manual. “We love that you can see the human hand in every one of our imperfect textiles,” says Lily, adding that every piece tells a story—like the scarf that became a lighter shade of blue because it was printed in the moist air of July’s monsoon season. “There’s a genuine, living spirit in a handmade thing that makes it worth hanging onto,” adds Hopie.

That spirit is the magic of human touch—a tension transferred from our hands when we make something with love. “Love is intention, so if something is made with intention, it’s palpable,” says Markle. In today’s digital era, capturing that feeling is priceless.

Hello & felicitations! We are working on sewwww many beautiful new sumptuous cozy fantasies for you we can’t contain our excitement. TAKING REQUESTS RIGHT NOW: what products and colors are you wanting in your life? Let us know! (? cotton dhurries, insane high-pile wool rugs, robes, & fabric by the yard all coming v. v. ?!)

Photography by Laura Dart
Get the best of FASHION in your inbox Thanks for signing up!
The latest fashion, beauty and celeb news delivered right to your email #FASHIONforall Now, check your inbox to complete your subscription
We won’t ever use your email address for anything else
Want even more FASHION? Follow us on social media.