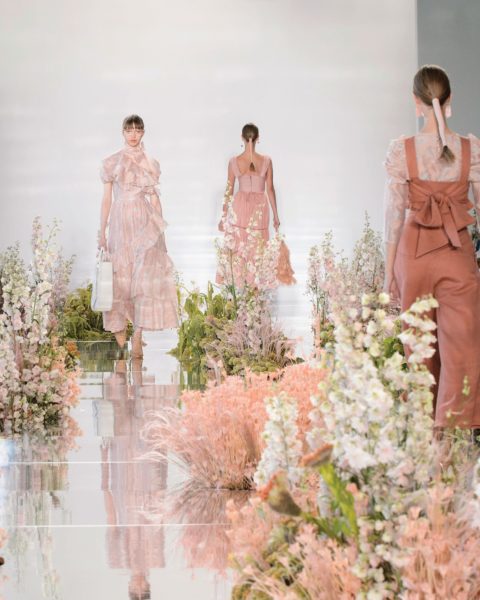 After This Past Year’s Activism, Are Spring’s Feminine Designs Demeaning or Empowering?

Florals, pastels and diaphanous dresses are often a few of fashion’s spring favourites, and this year, designers seemed especially smitten with these feminine references. But in the wake of 2017—a year when millions of women marched for human rights, “feminism” was one of Merriam-Webster’s most searched words and Time’s Person of the Year was a collective of individuals dubbed “The Silence Breakers,” who brought a litany of sexual misconduct to light—could these obvious feminine trends be too facile? That might be the point, but it’s not the whole story.

“Delicacy can be strong,” said Victoria Beckham at a preview of her Spring 2018 collection. In her previous role as girl-power-championing Posh Spice, Beckham almost exclusively wore black and never smiled, but as a designer, she has progressively weaned herself off boardroom body-con in favour of light and loose. The collection was indeed delicate, with ruffles, gathers and lots of sheer organza and silk in shades of white, dusty rose and lavender. However, there was also power red and plenty of black in the mix, as well as blazers and shirts buttoned all the way up to a pointed collar, suggesting Beckham still meant business.

At Alexander McQueen, Sarah Burton employed a similar palette, although her juxtapositions of fabrics and silhouettes were more dramatic. Many a ruffled gown that came down the runway was made of knit, organza and tulle in white, pink and red. There were florals, too—printed, embroidered or sewn on. Some of the pieces were in states of deconstruction or disrepair, though, some resembled wedding dresses and the most sparse items were worn over black pants.

Frothy frock or not, every McQueen look was grounded with triple-buckled moto boots, many of them patent and some covered in studs. It was footwear all the better for tromping through an English garden, and the one that surrounds Great Dixter in East Sussex, England, was Burton’s main source of inspiration. Describing the wearer, the collection’s notes read, “While her history informs her present, she is mindful of the nature that surrounds her, secure in its healing powers and its potential for the future.” Allow me to go down the proverbial rabbit hole and say there’s an air of Wicca in that statement. Elements of Burton’s previous collection were described as “witchy,” so it’s not surprising. Because of its goddess deity, the spiritual movement popular with feminists in the ’70s is, fancy that, surging once more.

British female designers weren’t the only ones remixing femininity for Spring 2018. Although streetwear is his claim to fame, American Virgil Abloh used flounce, flora and tiered tulle for his Milan-based label Off-White. Titling it “Natural Woman,” he had a specific iconic one in mind: Diana, Princess of Wales. “She was the people’s princess,” he says. “She had an ease about her presence despite the pressures of the world.”

Abloh says he pored over images of Princess Diana and then loosely reinterpreted her dressed-up and off-duty looks for the present. “In a way, [she] embodied two distinct, polar opposite styles that are extremely relevant: the red carpet and the gym,” he says. The show’s closer, a white evening jacket with a side flounce and bike shorts (worn by Naomi Campbell, no less), captured the two in one. That look, along with a couple of others, was accessorized with clear-PVC-wrapped heels. Two models in pastel skirt suits also carried them in hand while wearing sneakers and sport socks. “In my mind, the plastic finished the narrative because it felt like glass,” says Abloh, adding that it was a nod to Diana’s Cinderella-like quality. But one could argue that she was more like glass than Cinderella herself because she exemplified both strength and fragility.

This play with sheer fabric had an even deeper meaning at Ulla Johnson. As her show notes suggested, she was exploring the broader notion of transparency as something the world needs more of. Johnson is a frill seeker—there’s generally some in every collection—but she has never been quite so thoroughly see-through. Even the outerwear was translucent: a floral trench and a pink poncho made of a nylon fabric that she referred to as “technical organza.” But some weightier materials and dark hues—saturated denim and jet black—were also sprinkled in, lending gravity.

Parisian house Chloé didn’t shy away from a feminine flourish either. In a conversation with Instagram’s Eva Chen last November, the label’s new creative director, Natacha Ramsay-Levi, said: “Dressing in a feminine fashion can also be feminist. Being true to yourself, your point of view, your beliefs should look like you.” For her first collection, this translated into flowery, flouncy dresses, sure, but also into shit-kicking boots to go with them. The bags, mostly multi-handled and with sections of thick chain, were carried strongly in one hand as if they might also be used as a means of defence. On the left bicep of nearly every model wearing something sleeveless was a singular arm band—although it bore no message, it, too, felt defiant. So while Chloé’s trademark bohemianism was ever-present, this free spirit seemed fiercer.

The overall sentiment of the Spring 2018 shows appeared to be less about lightening up and more about equating femininity—in all its forms—with strength. Like Mother Nature in March, you can come in like a lion and go out like a lamb. Or the other way around. Or, heck, even both at once.

Ulla Johnson Spring 2018 Photography via Imaxtree
Get the best of FASHION in your inbox Thanks for signing up!
The latest fashion, beauty and celeb news delivered right to your email #FASHIONforall Now, check your inbox to complete your subscription
We won’t ever use your email address for anything else
Want even more FASHION? Follow us on social media.