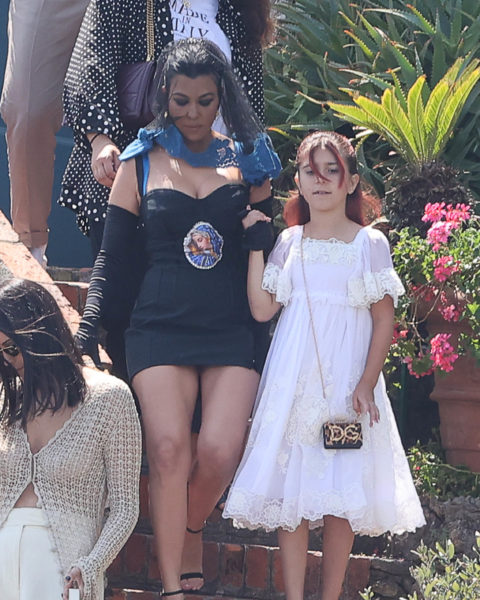 With some help from Dolce & Gabanna.

We’ve all seen the pictures by now. This past weekend, Kourtney Kardashian and Travis Barker had their third (and presumably final) wedding on the coast of Portofino, Italy. The multi-day affair brought plenty of opulence to the Italian Riviera with a generous helping of Catholic cosplay.

Setting a new bar for sponsored celebrity nuptuals, the Kravis festivities were “hosted” by luxury brand Dolce & Gabbana. All in all, it was one big ad campaign: the outfits were Dolce & Gabbana (including those worn by the other KarJenner family members), there was a D&G pop-up shop for guests to browse and the wedding ceremony was held at a villa owned by the Italian label. At the centre of this monetized matrimony? What will likely go down as the Kardashian camp-ification of the Catholic church.

Let’s start with the ecclesiastical outfits. For their pre-wedding celebration, the bride-to-be wore an all-black vintage mini dress with a colourful Virgin Mary emblem on the bodice and a gothic veil. Barker opted for a long black frock which was reminiscent of traditional Roman Catholic priest attire.

On their wedding day, Kardashian donned another D&G mini dress (white this time) and a trailing lace veil with a large, detailed embroidery of the Virgin Mary. The design seemingly paid homage to the tattoo on Barker’s head.

Sisters Kim and Khloé also got the subversive Catholic memo. Both were clad in black lace dresses with chunky oversized crosses as their chosen accessories. Khloé added a lavish gold headpiece, evoking the religious imagery of a halo crown. The couple’s gothic-themed altar featured a statue of the Virgin Mother and Child framed by a gold shrine and opulent candelabras.

While Barker is Catholic, the Kardashians are reportedly not. In fact, Kris Jenner actually has her own (non-Catholic) church, the California Community Church, which has come under fire for high membership fees and speculations that it’s a tax write-off. Needless to say, the Kardashians are not devout Catholics.

For a wedding that doubled as branded content, the heavy emphasis on Catholic imagery comes off as an aesthetics-based choice, not a religious one. With its garish decor, opulent accessories and gothic influences, it seems the Kravis wedding is just a performance of Catholicism.

Some have called it  “offensive and disgusting,” while others argue it “[mocks] the Catholic faith.” The whole thing felt like a production of religion, especially when you take into account the fact that the entire affair was hosted by a luxury brand known for selling Italian Catholic aesthetics.

Kourtney Kardashian having a wedding with so much blatantly Catholic iconography and NOT being Catholic is like having a chuppah at your wedding when you're not Jewish. They have reduced Catholicism into some artistic symbolism. It's offensive and disgusting. https://t.co/e40mxrllNY

Aside from its history of racism, misogyny and homophobia, Dolce & Gabbana is known for Southern Italian-inspired designs that are luxe, textured and colourfully mismatched. Since founding the fashion house in 1985, creative directors Domenico Dolce and Stefano Gabbana have embedded the brand with stereotypical romanticized Italian imagery, which includes symbols and motifs of Catholicism. If you’re cosplaying traditional Italian culture and religion, Dolce & Gabbana is the brand to do it with.

The irony of having a “Catholic” wedding sponsored by a luxury fashion brand should not be lost on any of us. But the Kravis wedding is not the first time the rich and famous have taken aesthetic inspiration from the Catholic church.

Take the 2018 Met Gala theme, “Heavenly Bodies: Fashion and the Catholic Imagination.” The Vatican worked with the Metropolitan Museum to produce the exhibition, which held designs inspired by religious iconography (including work by D&G). And the event itself welcomed celebrities in stereotypical Catholic garb — who can forget Rihanna dressed as the pope? Catholicism has a long history of being referenced in pop culture and art.

Since they began dating publicly, Travis Barker and Kourtney Kardashian have been reliably repping punk rock fashion, and their wedding taps into another modern-day, albeit controversial, trend: subversive Catholic aesthetics.

Dolce & Gabbana use Catholic imagery to appeal to ultra-wealthy, exclusive customers. Through its own muddled legacy, the brand has blended fashion with religion and harnessed their respective aspects of performance, influence and controversy. At the end of the day, what’s more quintessentially Kardashian than that?

Photography by NINO/GC Images
Get the best of FASHION in your inbox Thanks for signing up!
The latest fashion, beauty and celeb news delivered right to your email #FASHIONforall Now, check your inbox to complete your subscription
We won’t ever use your email address for anything else
Want even more FASHION? Follow us on social media.