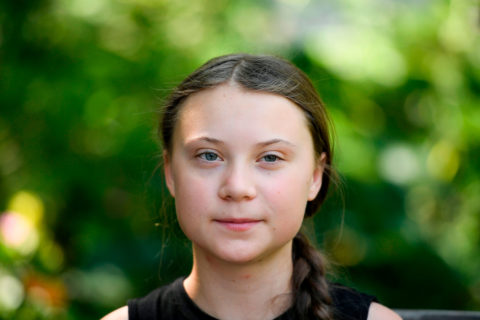 The 18-year-old climate activist talks about fast fashion and climate change, saying, “You cannot mass produce fashion or consume ‘sustainably’ as the world is shaped today. That is one of the many reasons why we will need a system change.”

Climate activist Greta Thunberg is calling out the fashion industry. The 18-year-old Swedish environmentalist is the first to grace the cover of the newly launched Vogue Scandinavia. The August/September issue, which was released on August 8, shows Thunberg in a serene forest, sitting against a moss-covered tree while gently petting a horse. She is wearing a yellow floral dress and an oversized, upcycled trench made from discarded coats.

Thunberg first became known in 2018 for her “School Strike for Climate” campaign that inspired students across the globe to protest climate change. Now, she’s recognized worldwide for her activism and personal commitment to environmental change. In her Vogue Scandinavia interview, Thunberg discussed her outlook on consuming fashion. For starters, she doesn’t, really. “The last time I bought something new was three years ago and it was second-hand. I just borrow things from people I know,” she said.

She followed up with a harsh truth: “If you are buying fast fashion then you are contributing to that industry and encouraging them to expand and encouraging them to continue their harmful process.” While fast fashion offers accessibility to the newest trends, it can lead to overconsumption and waste. Fast fashion brands produce clothing quickly and at low prices, often resulting in consumers buying more than they need and consequently throwing clothes away at a faster rate. Thunberg added that despite this, she “[understands] that for some people fashion is a big part of how they want to express themselves and their identity.”

She continued the conversation on Twitter, saying, “The fashion industry is a huge contributor to the climate and ecological emergency, not to mention its impact on the countless workers and communities who are being exploited around the world in order for some to enjoy fast fashion that many treat as disposables.” She called out corporations for greenwashing: attempting to appear environmentally conscious while practicing harmful methods behind the scenes. “You cannot mass produce fashion or consume ‘sustainably’ as the world is shaped today. That is one of the many reasons why we will need a system change.” she said.

Many make it look as if the fashion industry is starting to take responsibility, spending fantasy amounts on campaigns portraying themselves as ”sustainable”, ”ethical”, ”green”, ”climate neutral” or ”fair”. But let’s be clear: This is almost never anything but pure greenwash.2/3

This kind of systemic change was addressed in the August 9 climate report by the Intergovernmental Panel on Climate Change (IPCC). The report’s alarming findings state that humanity is unequivocally at fault for climate change — and that its severe consequences are happening now. Among the findings was a projection that within the next two decades, temperatures are likely to rise by more than 1.5 degrees Celsius above pre-industrial levels, which was the goal temperature set at the 2015 Paris climate agreement. The results of climate change can be seen through rising seas and extreme weather conditions like wildfires, droughts and floods — and the IPCC report confirms that not all of these changes are reversible.

In response to the report, Thunberg tweeted that it “contains no real surprises.” “It is up to us to be brave and take decisions based on the scientific evidence provided in these reports,” she said in a series of tweets. “We can still avoid the worst consequences, but not if we continue like today, and not without treating the crisis like a crisis.”

It doesn't tell us what to do. It is up to us to be brave and take decisions based on the scientific evidence provided in these reports. We can still avoid the worst consequences, but not if we continue like today, and not without treating the crisis like a crisis. 2/2

The IPCC report was released ahead of the November COP26 climate meeting in Glasgow, Scotland. The climate conference will host leaders from 196 countries, with the goal of agreeing on action to limit climate change. In her interview with Vogue Scandinavia, Thunberg said the change needed to solve the climate crisis can only come from the determination of individuals, who can then put pressure on those in power. “It needs to come through awareness and from people realizing that we are in an emergency,” she said. Hopefully, the IPCC report will be the first step towards inspiring that urgency.