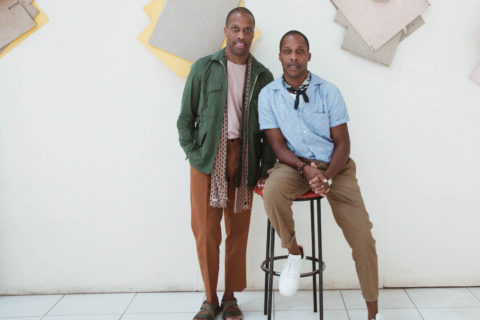 Goodee’s Byron and Dexter Peart on Curation, Conversation and Connection

“It’s a beautiful time for trailblazers.”

In addition to winning a Black Designers Award of Excellence this week, in the last month Byron and Dexter Peart — founders of the mindfully-curated, B Corp certified marketplace Goodee — have seen two of their ambitions also come to fruition. There’s the launch of Goodee’s new content series, “In Conversation With” (the first edition boasts a chat with model Sabrina Dhowre Elba and her husband, actor Idris Elba); and the duo also announced a partnership with Nordstrom for the Goodee 100. It’s a roundup of a hundred products from its site priced at $100 USD and under. Canadians can shop the pieces directly from Goodee’s e-comm, while in the U.S. the offering is online and in selects stores.

“It’s an edit inside an edit,” Byron notes of the range, which includes accessibly-priced home décor, personal care and lifestyle products ranging from the best-selling Goodee Hoodie to Obakki’s Bidi Bidi scarf and a hand wash/lotion set from Frama. “We really want people to reframe their notion of good design and the affordability of it. And [it’s] an entry point to the Goodee universe.”

This “world” within which the Montreal-based Peart brothers exist is one built to honour the spirit of coming together; teaming up with Nordstrom for Goodee 100 was a natural fit­, as was running a Goodee pop-up at the Whitney museum in 2019. Such moves not only bring the marketplace’s concept to the greater population; they also brilliantly amplify the work of the artisans showcased on its platform.

“The concept of collaboration is so embedded in the idea of Goodee as a marketplace,” Dexter adds. “All of our partners on the site are considered collaborators as well. They have wonderful products, they have great stories, and they’re amazing people. And we’re able to extend our network to them — hence the eco-system we’re trying to create grows.”

“There are so many micro-stories within the larger stories of what we’re doing,” Byron says, highlighting why the site not only features storytelling like that of “In Conversation With,” but also catalogues the craft techniques and makers behind its offerings. This content is crucial in terms of giving consumers an awareness of the value in the products found on sites like Goodee’s; pieces with a higher price tag than mass-produced buys, but ones created with intention, tradition and sustainability on their side.

One such compelling tale is that of Goodee’s Bassi Market Tote, which launched last summer. Meant to transport everything from your laptop to farmer’s market finds, the design has a heart-warming history behind its two styles. The striped version is hand-crafted from material made in Burkina Faso, which finds its way to a social co-operative in Bologna, Italy to be transformed into a tote. And the solid style is fashioned from a fabric composed of 100 percent recycled PET and hand-crafted by refugees in Italy.

“It brings together continental stories,” Dexter says of the bag — and its global context is heightened thanks to the fact that the Bassi is made in collaboration with the United Nations Ethical Fashion Initiative. He points to this single piece’s success as a motivator in moving forward with the creation of similarly considered products. “It’s exciting to bring people that maker experience and watch it flourish,” he says. “It’s proved to us that we can do this, and that the same process and cooperation can be embodied in other products that we [offer].”

While the pair have yet to reveal what those items might be, they’re happy to share what points of optimism they’ve clung to over the last year. Of course, launching a platform like Goodee shortly before the world locked down and consumers started to take even greater notice of the products they were buying — and the messages and materials behind them — has given the Pearts pause.

“Nobody could predict that we’d be home for a year,” Byron says. “What we did predict is that people would be far more aware and awakened to the things that surround them, and that they needed to have an intrinsic value to them. What’s happening right now, and what we’ve been trying to encourage people to do, is take time and be more considerate.”

“It’s a beautiful thing to be able to approach things in life because they instinctually feel right,” he adds about the business and how its selection of items like well-crafted hand wash and body balms have resonated with shoppers for both their current necessity as well as everyone’s heightened attention to the importance of self-care in all its many forms.

On a more personal level, the twin brothers have applied this attention to slowing down in all aspects of their being. “We lived this crazy life before, moving around all over the place,” Dexter notes about not only running Goodee for the past two years but also Want Les Essentiels, the accessory brand the two co-founded in 2007. “I don’t know what I was thinking, that I could just be on a plane once a week and that was totally OK. I’m enjoying slower living, and spending more time with family. I have two young girls, so my optimism is in the next generation. It feels like for the first time, at least in a long time if not ever, that there’s a space opening up for new voices. The power has shifted, and I’m extremely optimistic [that] maybe this is the time for the world to be reimagined and the future to be reshaped.”

“I’ve fundamentally always felt that the word that most directly aligns with ‘sustainability’ is ‘future,’” Byron adds. “It’s about ensuring the future for people and the planet.” Considering current forward-thinkers from Greta Thunberg to Amanda Gorman, Byron notes there are many reasons to look towards something brighter ahead. “It’s a beautiful time for trailblazers, and to chart new territory. And that’s what we’re trying to do. We’re on a path to carve a trail that will be inviting and welcoming and beautiful.”

Photography courtesy of Goodee
Get the best of FASHION in your inbox Thanks for signing up!
The latest fashion, beauty and celeb news delivered right to your email #FASHIONforall Now, check your inbox to complete your subscription
We won’t ever use your email address for anything else
Want even more FASHION? Follow us on social media.