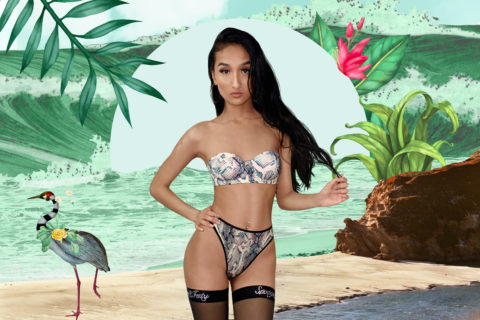 Get to know the woman hand-picked by Rihanna to star in the new campaign.

Back in May, Rihanna put a call out on her Instagram for fans of her Savage x Fenty label to submit photos of themselves modelling lingerie for the chance to be chosen to star in an upcoming campaign. Last week, the four winners of that contest were announced – and Toronto-based creative Sariena Luy was the only Canadian in the bunch. “My heart dropped,” Luy told us of the moment she was notified that she was shortlisted. When the official email came telling her she’d won, Luy said she “wanted to cry because it didn’t feel real.” We caught up with Luy to find out more about her story, why she entered the competition and how she hopes to be able to use the attention from the campaign to shine a spotlight on the important matter of representation.

Tell us a little about yourself.

My name is Sariena (pronounced: Sa-ree-na), and I’m a Creative Director based in Toronto. I’m a multidisciplinary artist that believes in using my camera to create social change for issues I’m passionate about. I’m the founder and Artistic Director of a youth-led organization called The Flaunt It Movement. “Flaunt It” uses the arts to foster self-love and representation of all women through creative community campaigns. Therefore, it’s safe to say that I aim to be a walking embodiment of our organization’s values, vision, and mission. I believe in using my art as a form of activism for educating, amplifying and representing people who share complex and intersectional identities. I am a Second-Generation Cambodian-Canadian woman aiming to serve women of colour and mainly build the representation of celebrating Southeast Asians in the Western context.

I began modelling in January 2019 to better understand what it’s like to be in front of the camera. It was always secretly a dream of mine to model, so I began using it as an effective way to build my confidence. As I started freelancing more as a model, I realized that many brands and artists were not used to “my look.” If I had a dollar for every time someone asked me, “What’s your ethnicity?” I’d be rich. Instead, I realize that this is an opportunity for me to challenge the absence of my identity in media platforms.

Why did you decide to enter the Savage x Fenty contest?

Rihanna is one of my greatest role models and inspirations in this world. She proves that inclusion shouldn’t be optional, but a mandatory component in every business. It’s on my bucket list to model on the runway for Savage X Fenty because the show is one of the only shows where I can genuinely see myself being valued and appreciated. As a darker-skin Southeast Asian woman, I’m modelling so that brands can learn how to value my existence and representation in their advertising. After seeing Anna Cruz [in the previous campaign], I knew that Savage X was one of the few brands that valued our ethnicities.

How do you feel about representation in the fashion industry in Canada? What changes do you think still need to happen?

I believe my answer applies to more than just the fashion industry, but Canada needs more genuinely diverse representation in everything. As we reflect on the uprising of activism, community organizing, and mobilizing efforts, living an anti-racist life indeed stems from being able to live in a society that is authentically representative, equitable and inclusive, especially to those who are marginalized.

I believe it starts in our schools and curriculums, but it is just as critical in fashion, arts and culture. We are a country built on genocide, erasure and appropriation. Canada accepts the world’s range of immigrants while actively erasing their originating histories and cultures. Our diversity in Canada is very surface-level and skin-deep. Through fashion, we can prioritize authenticity and teach people about the roots of what we often appropriate and fetishize in Western culture.

I grew up not seeing myself because I hold both typical South Asian and East Asian features. I have a much darker complexion than most East Asians. Still, my hair texture and eyes are very different compared to my South Asian friends. Therefore, there is an assumption that I am mixed, and therefore, prone to be exoticized.

And honestly, I don’t blame anyone for not being as exposed to different cultures. I know I wouldn’t be able to immediately recognize the differences in cultures on other continents either. However, I believe the fashion industry can champion inclusion and representation to redefine and evolve fashion as a whole. Canada needs to take more advantage of the multiculturalism we do have, but in a more meaningful way that inspires learning.

Today, we can make changes in the industry to make sure representation becomes authentic. I want my future daughter to see the entire spectrum of women of colour in different sizes, heights, skin tones, and features in every medium. I want the next generation of young women to grow up feeling empowered because the “standards of beauty” actually include them and their cultural narratives.

#SavageXSummer #Contest @savagexfenty ✨ ⁣ I've been doing my part by staying in quarantine and taking care of myself. Actively becoming a better version of myself every day for our #SavagexSummer ?? (And waiting for my Savage order to arrive in the mail). The contest ends today so do your girl a favour and tag @savagexfenty & #savagexsummer for me, please ?????.⁣ ⁣ On another note, I was so hesitant to upload these photos because I know some people are going to be uncomfortable seeing me like this. Yet honestly, I had to get over myself because I've been falling in love with the person I'm becoming every day because of all the healing, acceptance and help I've been getting. So, ??‍♀️. I love @savagexfenty because it stands for fearlessness, inclusivity and confidence. & I just want to embody those traits more every day. It’s come back season loves ?✨#womenempowerment #savagexambassador #savagex #lingerie #facetimephotoshoot

How do you hope to inspire other women who see your photo and this campaign more broadly?

I feel like I’m graduating with all the congratulations messages. My heart is so full of love from receiving messages from people saying they’re inspired by how I use my platform to promote body positivity and BIPOC representation. Many new followers are commenting on my photos saying, “I don’t know you, but I love your message.”

So when people see my photos, I want them to want to get to know me. I want people to realize that Southeast Asians – such as Cambodians, Laotians, Thai – exist and deserve to be commemorated. And I hope this inspires more people from various regions of the world to demand representation as well.

I used to think that I wasn’t good enough to model until I realized that the world just hasn’t seen enough of women like me. I want more women to see Savage x Fenty as a powerful example of what it looks like to have redefined the beauty standards in fashion. And I’m praying that my core values of wanting more authentic representation will be a message businesses understand worldwide.

Photograph courtesy of Savage x Fenty
Get the best of FASHION in your inbox Thanks for signing up!
The latest fashion, beauty and celeb news delivered right to your email #FASHIONforall Now, check your inbox to complete your subscription
We won’t ever use your email address for anything else
Want even more FASHION? Follow us on social media.