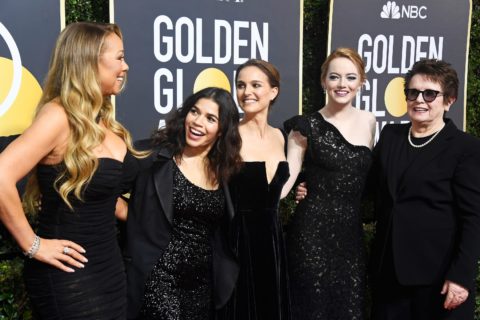 The Golden Globes Black Dress Protest Was an Unmitigated Success

When it was first announced that everyone was to wear black to the Golden Globes, it was met with understandable cynicism and fatigue that this was just another example of Hollywood elites telegraphing their virtues. But after the #TimesUp initiative was linked to the black dress protest, it was clear that this sartorial signalling was part of a much larger and meaningful initiative.

“This is a moment of solidarity; not a fashion moment,” Eva Longoria told the New York Times. Longoria and some 300+ other women of Hollywood banded together to launch the Times Up movement on New Years Day. In addition to raising $15 million+ to create a Legal Defense Fund, the group will also lobby for legislation to penalize companies that tolerate persistent harassment and will discourage the use of nondisclosure agreements to silence victims.

It’s a strategy that one organizer described as a form of “disaster feminism” to New Yorker writer, Dana Goodyear. The term was inspired by Naomi Klein’s observation that after a natural disaster the capitalists move in to rebuild. Disaster capitalism takes advantage of the post-disaster chaos and the women behind Times Up hope to do the same in this chaotic post Weinstein-era. Their goal is to bring about institutional and structural changes that prevent abuses of power and that also blow up the entrenched culture of silence that has permitted these abuses to continue for decades.

While many critics were skeptical – Robin Givhan wrote advance of the ceremonies that we are “beyond symbolism” – we at FASHION believe that the protest was an unmitigated success. The typical red carpet banter was still subject to routine awkwardness, but the black dresses deflected questions away from the tired, gendered designer dress fare and drove conversations in the direction of the protest.

Actors walked arm-in-arm with activists, such as Michelle Williams who brought Tarana Burke, who launched the #metoo movement, as her guest. Burke said it was “deeply humbling” to see how her action had grown and how powerful it was to be there. “We’re seeing a collaboration between these two worlds that people don’t usually put together and would most likely have us pitted against one each other,” she said. Some critics noted the presentation of women of colour activists as if they were “arm candy,” yet for the most part the actors were willing to step aside and let their message be heard.

It also perhaps changed how we view this colour. Rather than cast a funereal pall over the proceedings, NBC’s Al Roker commented that the red carpet had a “positive energy.” Alison Brie said that although “people may think it’s a sombre colour, the feeling here tonight is so celebratory; it’s so empowering.”

The all-black ensembles certainly didn’t diminish the pageantry one associates with Hollywood awards shows. Rather than fade into the background, the monochromatic gowns broadcasted the collective political message yet also reflected the individuality of the actresses.

Saiorse Ronan donned a simple black gown with a Jetsons-inspired silver epaulet, Dakota Johnson’s Gucci gown featured a sparkly buckle in front and a silver sunburst of glitter on the back, and from the front row, Oprah’s best friend Gayle King shimmered in a black-to-silver sequin ombre dress.

If the gowns weren’t sparkly than the accessories certainly were: Jessica Chastain wore a pair of gigantic flashing Piaget chandelier earrings and Samira Wiley dazzled in a gold statement embellishment atop her Romona Keveza dress. Then there were the 130-carat Colombian emerald earrings from Lorraine Schwartz that that Zoë Kravitz wore.

In lieu of sparkles there was lace; Catherine Zeta-Jones wore a sheer mesh gown by Zuhair Murad with tendrils of lace encircling the bodice. In absence or addition to both, there was cleavage c/o Kate Hudson, Margot Robbie, Sharon Stone and Geena Davis.

There were two notable exceptions to the all-black dress code. One was Meher Tatna, the president of the Hollywood Foreign Press Association who wore a stunning red gown and overcoat with gold floral details. She did, however wear one of the 500 Time’s Up pins that had been designed by Arianne Phillips and created by Michael Schmidt. “[In our culture] when you have a celebration, you don’t wear black,” she told Entertainment Tonight.

The other possible exception was Frances McDormand, who appeared to be wearing navy blue as she accepted her award for Best Actress in a Motion Picture – Drama. In her speech, she said, “I keep my politics private,” but went on to add: “But it was really great to be in this room tonight and to be part of a tectonic shift in our industry’s power structure. Trust me the women in this room tonight aren’t here for the food. We are here for the work.” So was she making a statement with her colour choice? It’s hard to know with this famously feisty iconoclast.

Black is the colour of disguise, and as such, made it impossible to tell who was wearing black to support Time’s Up and who was wearing black just to fit in. For example, the recently-engaged Paris Hilton tweeted a photo of herself in a lacy black number captioned with the hashtags #LadyinBlack and #TimesUp, despite believing that the women who accused Donald Trump of sexual assault are “just trying to get attention and get fame” in an interview with Marie Claire one year earlier. The black dresses smoothed over any hypocrisies and moral misgivings, allowing everyone to dress on the right side of history, at least for one night.

Some commentators felt the black dress protest was anti-fashion, but if anything it reinforced the power of fashion because it added another dimension to its artistry. It sent a unified message that indeed the time has come to end sexual harassment, gender inequality and discrimination in Hollywood and beyond. Or as Oprah said, “a new day is on the horizon.”