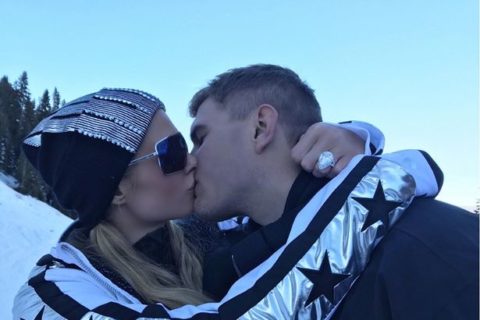 Paris “What’s Walmart?” Hilton, iconic ditzy heiress of the early 2000s and author of Confessions of an Heiress, is now engaged! Fiancé Chris Zylka, an actor who has appeared in The Leftovers and…Hannah Montana, proposed to Hilton while skiing in Aspen, as Hilton wore snow pants emblazoned with silver stars.

I said Yas! ?????? So happy & excited to be engaged to the love of my life. My best friend & soulmate. Perfect for me in every way. So dedicated, loyal, loving & kindhearted. I feel like the luckiest girl in the world! You are my dream come true! Thank you for showing me that fairytales do exist.?

A photo posted by Hilton on Instagram depicts the razor-cheekboned heiress kissing her fiancé while showing off a massive 20-carat pear shaped ring that appears to be larger than the average eyeball, which is 25mm. For some context, the Hope Diamond, the largest and most valuable blue diamond in the world is 45.52 carats. Beyoncé’s engagement ring was a mere 18 carats. Melania Trump’s engagement ring was a paltry 12 carats. The ring is, however, slightly smaller that Paris Hilton’s first 24 carat engagement ring, which was given to her in 2005 by ex-fiancé Paris Latsis. (After they broke up, she auctioned off the ring with proceeds going to benefit Hurricane Katrina victims.)

PEOPLE reports that the ring is valued at approximately $2 million and that Zylka “literally started shaking” the first time he saw the ring. Zylka designed the ring himself and celebrity jeweller Michael Greene’s team was able to fabricate the ring in two days – a process which normally takes around three weeks. Apparently this gem has the power to induce jelly legs because Hilton also told PEOPLE, “I was shaking as I put it on.”