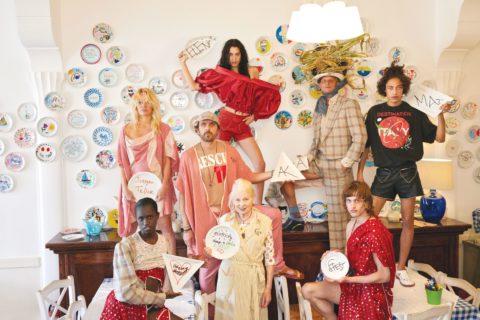 A shot from the Andreas Kronthaler for Vivienne Westwood Spring 2017 campaign featuring the husband and wife duo. Photography courtesy of © FASHION TOGETHER: Fashion’s Most Extraordinary Duos on the Art of Collaboration, edited by Lou Stoppard, Rizzoli New York, 2017. Photography by © Juergen Teller.
Style

Fashion Together: How Fashion Forms Families

Lou Stoppard's new book, "Fashion Together", pays tribute to the power of collective ingenuity in fashion.

In fashion, we tend to revere the star designer, the star model or the star photographer. But in her new book, Fashion Together: Fashion’s Most Extraordinary Duos on the Art of Collaboration, 27-year-old British journalist Lou Stoppard does a deep dive into something we’ve forgotten to uphold: collaboration. “Fashion doesn’t work like that,” says Stoppard of the one-star system. “You can’t do anything in fashion without a group of people; every show is teamwork, every photo shoot is teamwork, every collection is teamwork.”

As the editor of SHOWstudio, the London-based fashion film and broadcasting website founded by photographer Nick Knight, Stoppard has spent years covering collections and conducting in-depth interviews with fashion’s most famous. SHOWstudio is devoted to revealing the creative process—literally “show studio”—and Stoppard’s work for it, she says, informed her book. “I’m interested in how people get to the final result—all the work and effort that goes on behind the scenes. Often it’s just as interesting as the completed garment or photograph.”

This is also what makes Fashion Together so rich with insights from the 18 design duos Stoppard spotlights. Says Jonathan Anderson, of ready-to-wear labels J.W. Anderson and Loewe: “You can be the most genius designer in the world. You can make the most incredible clothing and come up with the most incredible silhouettes, but if you’re unable to collab­orate, it will never grow.” Anderson works closely with stylist Benjamin Bruno. Other creatives interviewed for the book include Jack McCollough and Lazaro Hernandez of Proenza Schouler and jeweller Shaun Leane on his relationship with the late Alexander McQueen.

It’s also fascinating to see how each pair describes teamwork as indispensable to their process; it’s what pushes them forward, inspiring them to grow and innovate. For example, Dutch designer Iris van Herpen, whose cutting-edge creations rock fashion’s boundaries each season, has worked with someone completely outside fashion’s sphere: Canadian architect Philip Beesley. “Collaboration can help fashion move forward because sometimes it’s so isolated,” she says. “I think it’s very beautiful when it’s more interactive with the world around us.”

The industry is taking notice, too. Vetements, the collective that saw instant fame with its 2014 debut collection, comprises seven designers (Demna Gvasalia, his brother Guram and five friends) who take pride in working together. “It has to be democratic,” says older brother Demna. “It’s the most efficient way to work.” And in late 2016, global trend forecaster Lidewij Edelkoort spoke at The Business of Fashion’s annual VOICES conference (think TED Talks, but for fashion), detailing the major changes she thought the industry needed to make in order to remain a forward-thinking agent of change. Among them was a call to recognize the collaboration behind every collection. “It’s unbelievable that in every movie we see, at the end…all the names of the people involved in the filmmaking are there. In fashion, there is only one name.” She joked, “It’s very unfashionable, I think.”

As for what’s next? As younger designers emerge, Stoppard says we’ll see even more partnerships between people working in totally different fields. Millennials are more fluid in terms of how they define themselves and their roles. “They’ll try new things and work with people who aren’t necessarily from the same discipline. I think that will lead to more interesting collaborations.”

Fashion Together is now available in stores and online.

A shot from the Andreas Kronthaler for Vivienne Westwood Spring 2017 campaign featuring the husband and wife duo. Photography courtesy of © FASHION TOGETHER: Fashion’s Most Extraordinary Duos on the Art of Collaboration, edited by Lou Stoppard, Rizzoli New York, 2017. Photography by © Juergen Teller.
Get the best of FASHION in your inbox Thanks for signing up!
The latest fashion, beauty and celeb news delivered right to your email #FASHIONforall Now, check your inbox to complete your subscription
We won’t ever use your email address for anything else
Want even more FASHION? Follow us on social media.