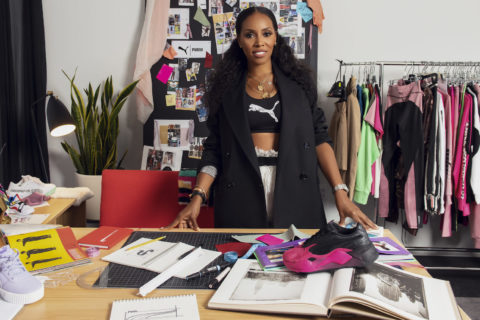 A hot-off-the-presses capsule collection from Hayley Elsaesser, plus more on June Ambrose’s new role at Puma.

Already known as a super stylist – it was she who put Missy Elliott in that slick patent bubble suit, FYI – creative director, author and costume designer June Ambrose can add another feather to her extremely chic cap on the heels of her new assignment as creative director of Puma. The role encompasses not only design-related duties; she will also work with the brand on social impact and equality-focused initiatives. “The connection between style and sport is timeless and it’s something I’ve always wanted to put my spin on,” said Ambrose in a statement. “Beyond the collections, it’s important to me that the collaboration is rooted in social impact, and Puma’s work in the social justice space to empower youth through sport makes them the perfect partner.” The brand is also stoked, with global director of brand and marketing Adam Petrick saying that “June is an icon at the intersection between fashion, music, culture and purpose. Having the opportunity to bring an individual with such talent into the world of sports is unique and we are excited to see how she can redefine what it means to create a sportswear collection.” Keep your eyes peeled for Ambrose’s upcoming contributions to the renowned athletics label such as an exclusive with Puma Hoops and a new Title Nine offering.

In addition to tapping singer-songwriter Kehlani and rapper Young Thug as the latest campaign stars for its Fall collection – which features the new Power Puff collection composed of functional-yet-fashionable jackets like the reversible Syndicate Puffer – Montreal’s Moose Knuckles is also set to open more stores across Canada in the coming weeks. Vancouver’s Pacific Centre and Calgary’s CF Chinook Centre will welcome the cult outerwear brand this month, and pop-ups are set to appear in Winnipeg’s Polo Park and the West Edmonton Mall; this crop of shops follows the launch of a permanent space in Holt Renfrew’s Square One location. “While many companies have focused the lion’s share of their attention on the digital landscape, we have strayed from the pack, bolstering our efforts with a smart plan to provide what so many people need right now: space to connect with others,” Noah Stern, Co-CEO of Moose Knuckles, said in a press release. “Whether it’s our bricks-and-mortar or pop-up environments, creating physical spaces is a bold choice that aligns with our company’s pioneering attitude.”

In honour of National Newspaper Week, Toronto-based designer Hayley Elsaesser has introduced a limited edition capsule collection called Champion the Truth. Boasting an assortment of goods from t-shirts to tote bags and masks, the new pieces feature Elsaesser’s much-loved ‘Mouthy’ print along with the words ‘news’ and ‘truth’ iterated in various languages. A portion of the sales will go to Canadian Journalists for Free Expression, an organization that “works to defend and protect the right to free expression in Canada and around the world”, according to its website. But it’s not only this noble mission that inspired Elsaesser to create the capsule, which is available until the end of the year; her Opa was the owner and publisher of a newspaper in British Columbia.

Nordstrom has partnered with Covenant House

Earlier this week, Nordstrom announced that its give-back label, Treasure & Bond, will be donating a segment of proceeds from its sales to Toronto’s Covenant House. The made-in-Seattle brand has partnered with the youth-focused agency in addition to working with U.S.-based groups like New York’s Ali Forney Center and The Night Ministry in Chicago. Speaking about the news in a statement, Josie do Rego, Covenant House’s Director of Development and Communications, said that “With Nordstrom’s support, we can continue to help youth who are homeless, trafficked or at risk take back control of their lives and build a brighter future.”

If you’ve been waiting to get your hands on activewear pieces by Outdoor Voices, like a cozy Nimbus 1/4 zip top or their best-selling Sunday Sweatpants, now’s your chance. The Texas-based brand just launched restriction-free shipping to Canada. Bonus: New customers to the label – which counts Olivia Wilde and Harry Styles as fans – also get $10 off purchases of $100 or more.

Fans of the iconic Quebecois brand Le Château are in for a treat this Halloween season as the brand initiated its VIP Rewards Pour Vous program this past Wednesday. “We wanted to reward our customers for continuing to choose Le Château as their style destination,” Franco Rocchi, Le Château’s Executive Vice President, said in a press release. “The launch of VIP Rewards Pour Vous both celebrates our heritage and is a part of our continued digital evolution, giving back to shoppers in store and online.” An extended version of the existing VIP program, perks include a $15 coupon for every 150 points earned, early access to new collections, and more to be announced soon (like free shipping for VIP transactions over $150).

Catch up on other fashion happenings this week:

Photography courtesy of Puma.
Get the best of FASHION in your inbox Thanks for signing up!
The latest fashion, beauty and celeb news delivered right to your email #FASHIONforall Now, check your inbox to complete your subscription
We won’t ever use your email address for anything else
Want even more FASHION? Follow us on social media.