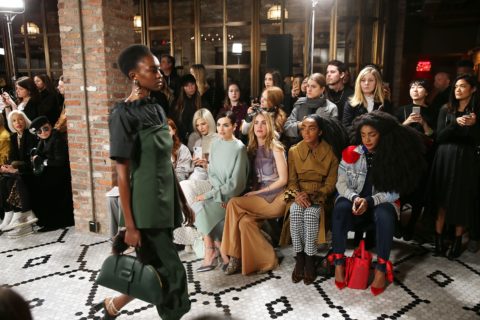 As with everything these days, there’s an app for it

After shocking allegations against Bruce Weber and Mario Testino (the Weinstein-esque OGs of the fashion world) appeared in the New York Times last month, the industry has been trying to find ways to deal with the reckoning newly arrived on their doorsteps.

Condé Nast severed ties with the photographers. The Council of Fashion Designers of America announced plans to provide models with private changing areas at New York Fashion Week for the first time. And now the fashion industry has its own version of Time’s Up, the legal defense fund founded by women in Hollywood to provide legal aid to women—across industries—who had suffered abuse or assault in the workplace.

Called Humans of Fashion, the newly minted organization’s mission aligns closely with that of Time’s Up, but focuses on models, stylists, makeup artists and other members of the fashion industry. Founded by model Kristina Romanova and fashion lawyer Antoniette Costa, the organization’s soon-to-be-launched app, according to the website, will make it “easier to connect with victims of sexual harassment and assault, report occurrences, and seek help and advice moving forward.”

Co-founder Kristina explains the mission behind #HOFFoundation and how it will address sexual harassment and abuse in the fashion industry. ? by @daveprokopec #nonprofit #Fashion #NYFW.

A post shared by Humans of Fashion Foundation (@humansoffashionf) on Feb 6, 2018 at 5:56am PST

No country is immune to sexual predators, including Canada. Members of the fashion industry in Toronto and Montreal have been coming forward with their experiences of harassment and abuse, and FASHION has an exclusive story on Canada’s #metoo movement in the upcoming March issue. Given the unfortunately universal nature of this problem, Humans of Fashion was founded with a global reach in mind, rather than restricting its services to the fashion community just within New York, or even within the United States.

“Humans of Fashion is a global force for change and accountability,” Romanova tells FASHION. “It is for all people who work in the fashion industry: models, makeup artists, designers, stylists, hair stylists, assistants, crew. The movement is an international initiative; we also have plans to be present at Milan Fashion Week.”

“Our first phase is to listen and evaluate what those in the industry describe as their issues,” adds Costa. “We will prioritize based on what we hear. We believe that the industry is global and individuals move seamlessly between international fashion hubs and we want to be able to connect the resources to where the need is.”

When asked about their decision to form a separate organization instead of joining forces with the existing Time’s Up Fund, Romanova responds, “We will partner with all progressive forces. Given the power of our platform idea and people who have already agreed to support it, we are hoping to create a new reality, to revolutionize how people communicate and conduct business, and to make this exciting industry harassment- and abuse-free.”