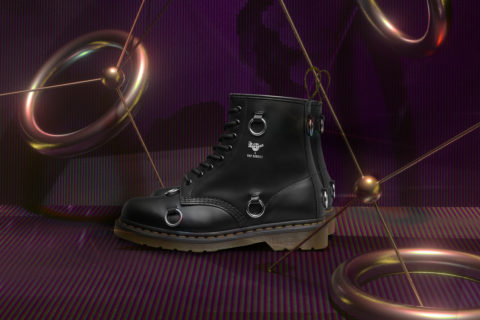 2020 marks 60 years since Dr. Martens first released their now iconic 1460 boots – and to celebrate the milestone anniversary, the brand is releasing a new collaboration each month for the whole year. The mandate given to designers was to reimagine the boot with their own aesthetic stamp.

January saw the release of the first collab with A Bathing Ape, and now FASHION can exclusively reveal that the second collaboration is with none other than Raf Simons.

Simons’ interpretation of the boot features a smooth leather upper, nickel rings inspired by the New Romantic/Punk club scene of the 70s, and a dual logo on the ankle cuff. The resulting design is described in a release as “a nod to rebellious punk culture with avant-garde design.”

Speaking of the inspiration for his design, the former Calvin Klein designer said, “The rings are a referral to the rings we used in our SS19 collection – that collection was very much inspired by the London club scene, more specifically at that time when punk transformed into New Wave. I was so inspired by how people dressed when I went out back then. It was so creative; it was also the time of the New Romantics. People would transform their look by cutting up their clothes, adding safety pins, rings, charms, etc.” He added, “This interpretation of the 1460 boot stimulates you to make it your own. You can personalize it by adding charms or keep it clean as it is.”

This isn’t the first time the pair has collaborated. Last year, Simons’ reimagined the Dr. Martens 1461 shoe as part of his F/W19 collection. It was a particularly momentous moment given that it was his first show since leaving the American brand. The pair share a deep rooted love of music, art and self-expression, and this latest collaboration only further proves the synergy between them.

As for the timelessness of the 1460 boot, Darren Mckoy, Dr. Martens global category director of footwear & accessories, explained, “The 1460 is a rare piece of design that transcends trend: having been adopted by youth culture for the last 60 years, the boot has never been affiliated to one particular look, but loved by many for its durability and unique striking looks.”

It’s the boots ability to seamlessly blend into the wardrobes (and lives) of its wearer that Mckoy believes will help it to continue to stand the test of time over the next 60 years. “As people are looking to decrease their environmental impact, they are looking at true classics that stand the test of time from a style and durability point of view. This means buying fewer things, but cherishing the ones that you have.”

The limited edition collaboration will be available form February 22 at drmartens.com and in select retail destinations.

Photograph courtesy of Dr. Martens
Get the best of FASHION in your inbox Thanks for signing up!
The latest fashion, beauty and celeb news delivered right to your email #FASHIONforall Now, check your inbox to complete your subscription
We won’t ever use your email address for anything else
Want even more FASHION? Follow us on social media.