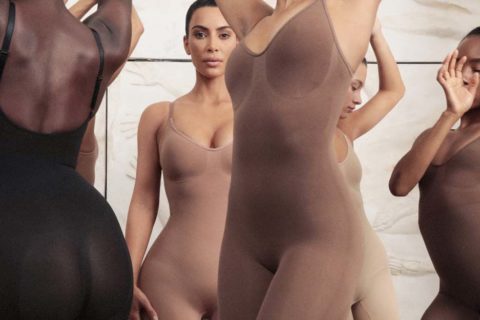 Though Kaia Gerber isn’t a ‘90s baby, one more than one occasion she’s effortlessly donned the trends of the decade. Now, she’s about to show us just how serious she is about the style. The breakout supermodel has designed a four-piece Jimmy Choo collection, which will debut on February 2. Though we can’t get our hands on the capsule just yet, we do have a rough idea of what to expect. Gerber – who has been a muse for Jimmy Choo for the past three years – designed a lace-up combat boot, a western boot, snakeskin sling-back kitten heel and a black mule. “I jumped at the chance to work with Sandra [Choi, Jimmy Choo’s creative director] on my dream capsule of shoe and boot styles, it was such an honour to be able to brainstorm creatively and I am so thrilled with the result,” Kaia said in a press release. “I wanted an effortless on/off duty wardrobe that could work with any look in a colour palette that talked to my Cali roots while adapting to any city, at any time, anywhere.” In addition to stunning shoes, the collection has a philanthropic edge, with fifteen per cent of the collection’s sales being donated to St. Jude Children’s Research Hospital.

Victory travels in Vuitton. For the very first time, the Larry O’Brien Trophy will be awarded to the NBA Finals winners this year in a bespoke #LouisVuitton Travel Case. Learn about the new #LVxNBA partnership via link in bio.

For the NBA, victory now travels in Vuitton. Luxury fashion house Louis Vuitton has hand-crafted a travel trunk for the Larry O’Brien Trophy, the exact hardware that gets awarded to the NBA championship team each year. The iconic LV monogram print covers the case, and a white “V,” for victory, sits on the front. The NBA logo on the blue interior is a personal nod to the league. This new treasure was revealed this week in a way that combined both the league’s and the fashion brand’s natural habitats: at an NBA game, in Paris. Though the French label has designed cases for other prestigious trophies in their ongoing series “Victory Travels in Louis Vuitton,” this is the first North American league to clinch such a trunk. “Louis Vuitton has long been associated with the world’s most coveted trophies, and with this iconic partnership the legacy continues–victory does indeed travel in Louis Vuitton,” says Louis Vuitton Chairman and CEO Michael Burke. The NBA and LV also revealed a multi-year partnership agreement, which will see Virgil Abloh, Louis Vuitton’s creative director of menswear, design co-branded ready-to-wear- and accessory-filled collections. Watch this space.

SKIMS is hitting Nordstrom stores, and will ship to Canada

Created by @kimkardashian, @SKIMS is the new, solution focused approach to shape enhancing undergarments and it’s launching exclusively at Nordstrom on February 5. Visit the link in bio for store locations and stay tuned for more info!

Kim Kardashian West’s shapewear brand SKIMS will soon be available at Nordstrom. As of February 5, Skims will be stocked at select Nordstrom stores as well as online, and Canada will be the only international shipping destination that SKIMS will allow via Nordstrom. Starting with the brand’s core products, like SolutionwearTM, Fits Everybody Underwear and accessories, the product range within Nordstrom will gradually expand on a monthly basis. Kardashian West expressed in a video posted to both brands’ Instagram accounts that choosing Nordstrom as her first retail partner felt natural. “Nordstrom is renowned for its unmatched customer service and inclusive size offerings. It was essential to me that we launch with the full range of sizes and shades that Skims has to offer, which is a value shared by Nordstrom,” she said. “I am thrilled to bring SKIMS to Nordstrom knowing that both fans of the brand and those discovering SKIMS for the first time will have an exceptional shopping experience.” Though Canadian shoppers won’t get that full brick-and-mortar experience that she is referring to, access to the products through delivery is greatly accepted.

THE 1460: REMASTERED To celebrate the 60th anniversary of Dr. Martens’ iconic 1460 boot, BAPE® reworked the model to create a special edition that fuses both brand’s DNA. The special edition 8-eye boot features a black smooth leather front, contrasting with a green BAPE® 1st camo upper to present the best of both brands. The BAPE STA™ logo cuts through the midsection of the boot, with a yellow BAPE® ape head logo tag adding a finishing detail to the heel-loop. Available on Saturday, January 25th at A BATHING APE® locations and BAPE.COM. #bape #drmartens @drmartensofficial

To mark its 60th anniversary this year, Dr. Martens has invited a dozen pioneering brands, labels and designers to recreate the original 1460 Dr. Martens boot, reworking it to express what the boot means to them. One new version of the boot will drop each month, the first having been designed by A Bathing Ape. The streetwear brand, recognized by its camo prints and premium collections, will carry that distinctive print over to its boots, which are available in a limited quantity starting today at drmartens.com. Watch this space for news on next month’s collaboration.

One of the original supermodels of the 1990s, Helena Christensen, has nestled into a career as a renowned fashion and art photographer. And now, as a first-time venture, she will team up with H&M for a mini capsule collection. The collection features a series of flowers that she photographed, printed on loose, curved-hem T-shirts, cropped sweatshirts and oversized hoodies. But it doesn’t end with the wares. Christensen also shot the campaign images, which allowed her to bring her art to life in another way. A mise en abyme, perhaps? “I wanted to capture the generation of tomorrow, encouraging them to be themselves and letting their personalities shine,” says Christensen. “We’re happy to be collaborating with Helena Christensen. From her work behind the camera to magazines or fragrances, plus her charitable work, she’s a true icon. And her beautiful photographs of flowers for this collaboration look amazing on the ‘90s streetwear-inspired designs—it’s laid back with an edge,” says Maria Östbolm, head of womenswear design at H&M. The collection will be available online and in select stores worldwide by early February.

This spring, Grammy-nominated Khalid will be featured in Reebok’s Sport the Unexpected campaign. Khalid’s inaugural campaign with the footwear and apparel company includes an adorable shot of him playing with his dog, Maui, who is dressed in a handmade Reebok doggy tracksuit for the occasion. This partnership, like the many previous celebrity-fronted Reebok campaigns, allows the brand to showcase its heritage through a contemporary lens. “Khalid continues to be a beacon of originality, pride and imagination for today’s rising youth,” says Reebok VP of Marketing Matt Blonder. “Through his unique sound and a personal journey that took him across the country, Khalid authentically symbolizes our common ethos—to inspire creativity and encourage experimentation.”