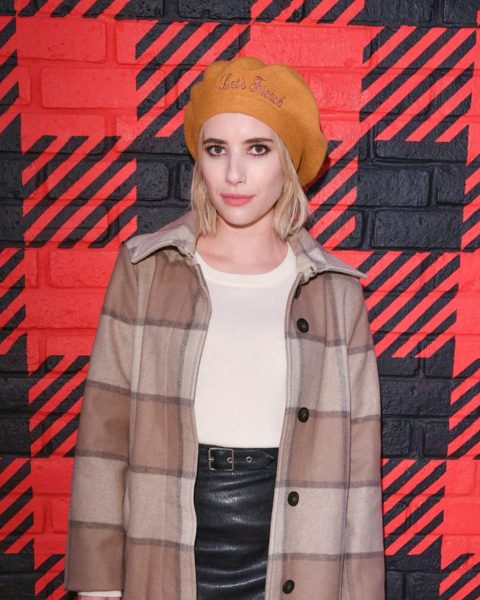 You might know Emma Roberts as the star of hit TV shows Scream Queens and American Horror Story. Or maybe, you know her as the daughter of actor Eric Roberts and niece of Hollywood Hall of Famer, Julia Roberts. Whether it’s through her film career, her lineage, her online bookclub or her enviable sense of style, the point is: you definitely know Emma Roberts.

So when the 26-year-old actress came to Toronto to celebrate the grand opening of Woolrich’s first Canadian outpost, we made sure to stop by. Between cocktails, canapés and a store full of cozy coats, we chatted with Emma about becoming Nancy Drew, shopping sustainable and being a celebrity style icon.

@EmmaRobertsClothes has over 15,000 followers on Instagram. When you get dressed in the morning, are you thinking about the people out there who are watching what you wear?

It’s so flattering. When I was younger, I would always be on the Internet looking at pictures of Mary Kate and Ashley Olsen and Sienna Miller, trying to copy their style. When I got my first big job, I saved up my money to buy a Balenciaga purse–just because the Olsen twins had it. I remember feeling so chic walking around woth something that people I look up to had. So when people come up to me and say they love my style, it’s such a compliment. I know what it’s like to admire someone’s style and want to own pieces that they own.

So you bought a Balenciaga purse because of the Olsen twins. If someone wanted the quintessential Emma Roberts item, what would they buy?

Definitely a leopard coat. Or anything plaid, like the Woolrich coat I’m wearing tonight. I feel like plaid is such a good staple. I love leopard, but I think everyone’s doing leopard now–plaid is a good leopard alternative.

So at the Oscars this year you wore a vintage Armani Prive dress in support of Red Carpet Green Dress. Is sustainable fashion a cause that’s close to you?

I love the idea of shopping for vintage items. It’s sustainable, but also there’s history behind it. It’s fun to buy vintage clothes and think: who wore this? I was just in Nashville, and I bought this amazing white lace dress from the 20s. You can just tell that this dress has seen some beautiful parties.

Now onto the serious questions: How often do people ask you about Nancy Drew? What was it like landing that iconic role when you were 15?

Oh people definitely still come up to me about Nancy Drew. When I auditioned for Nancy Drew, I picked out a special outfit for my audition: a little skirt and this plaid cardigan. And I was so adamant about that cardigan and buttoning it up all the way to the top button–and I went in there and I totally embodied the character!

I was up against a lot of other girls, and I still just felt like I was going to get the part. I really think my plaid cardigan was my good luck charm.

You’ve got your bookclub, Belletrist, so you’re definitely a book person. Woolrich is known as more of a rugged, outdoorsy brand. What would you rather: curl up with a book, or go out for a hike?

I’m kind of in between. For example: I’ll go to a park and read a book. I went to summer camp my whole life growing up, so for six years I did archery, rifelry and sailing competitions, so I’ve always straddled the line of being extremely un-athletic but being extremely outdoorsy. If that makes sense.

Photography by George Pimentel, Getty Images for Woolrich
Trends, beauty secrets, culture & more
Yours for only $1 an issue
Subscribe now!