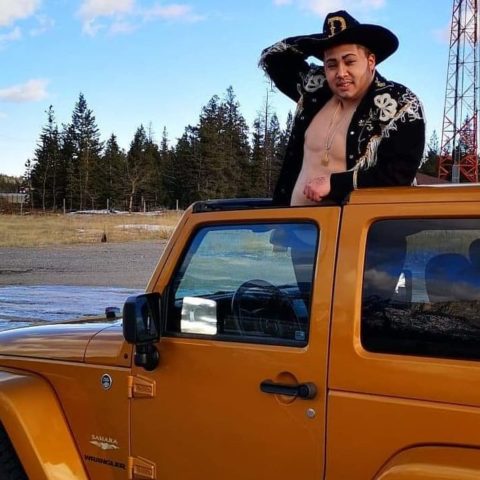 Your Guide To Drag Scenes Across Canada (Beyond Toronto, Montreal & Vancouver)

"I think Calgary has one of the best, bar none, drag scenes in the entire country.”

Despite the ongoing closure of queer spaces throughout the country, drag is popping up in venues all over, from straight cowboy-themed bars to libraries, bowling alleys, and cruises out on the ocean. The surge in popularity of the art form over the past decade has helped create — and in some cases, re-energize — drag scenes across Canada.

Toronto, Montreal, and Vancouver may be Canada’s best-known drag hubs, but there are vibrant, captivating performers all over. As Winnipeg’s Prairie Sky puts it, “Drag happens anywhere queer people have a closet and a mirror.” With Pride Month in full swing, FASHION spoke to drag artists from five Canadian cities to learn more.

Treaty 1 is home to one of Canada’s most exciting drag collectives, The Bannock Babes. Rather than a drag family, which is a queer support unit of drag parents, siblings, and children, The Bannock Babes is a loose collective of 15 to 20 Indigiqueer performers who come together for powerhouse showcases of Indigenous queer culture.

Prairie Sky explains The Bannock Babes formed in 2019 because she and two other performers she worked with at the drop-in and resource centre Sunshine House saw a lack of Indigenous representation at drag shows. That’s not to say there’s ever been an absence of Indigenous drag in the city, but lineups weren’t reflecting Winnipeg’s vast Indigenous talent pool at the time. “As long as there’s been drag, there’s been Indigenous drag queens in Winnipeg,” Prairie Sky says.

Bannock Babes shows usually happen at Club 200, Winnipeg’s only queer bar; Fame nightclub closed in February but hopes to eventually relocate. There are other spots for drag shows, though, including the queer-friendly Good Will Social Club, which hosted multiple shows per month pre-pandemic and the restaurant The Tallest Poppy, which has a drag brunch.

According to Buffy Lo, Feather Talia, and Prairie Sky, Winnipeg’s drag scene is characterized by a pretence-free atmosphere where performers of all types share the same spaces (and usually have a drink together when the show’s done). “We make sure the show goes as smoothly as possible,” Buffy Lo says. “After that we let loose and relax and have fun without having to worry about what people think.”

There may not be a gay bar in Whitehorse, but queer folks in the northern Canadian city have have managed to find spaces to host regular drag and burlesque shows, helping to foster queer community up north. There’s also organizations like the Queer Yukon Society and Yukon Rendezvous that support local drag performers and pay performance fees that often exceed standards in larger cities. Some local organizations even tap government funding to help performers buy drag essentials like shoes and breast plates.

Jolene Queen Sloan also found Whitehorse welcoming after moving to the city following stints in Toronto and Vancouver. Jolene, who came to Canada five years ago from India, sought out a local hair salon owner who taught her the ropes of hair and makeup and introduced her to Mary Sloan, a retired drama teacher who helped her hone her performance skills. Jolene followed the drag tradition of taking on Sloan’s last name for her moniker, explaining she considers the straight woman her drag mother. Jolene now performs regularly in Whitehorse and has racked up nearly 20,000 TikTok followers, many of whom are Canadians of Indian descent who love her drag-infused dances, which draw from her Punjabi culture.

There’s no separation between the drag and burlesque scenes in Whitehorse, according to the drag king Cereal, who co-produces shows that mix the two with local burlesque star Chérie Coquette. The two have produced shows all over the city, from event centres to bars and even house parties. Cereal adds the local scene has been bolstered through collaborations with theatre groups like Gwaandak Theatre, which recently created a mentorship program for Indigiqueer and POC artists and hosted a drag-infused cabaret as part of its Awaken Festival.

Calgary is home to the Fake Mustache Drag King Troupe, which claims the title of Canada’s longest-running drag troupe. While it’s got “king” in its name, the troupe’s shows feature a mix of performers, including ones with non-binary personas like drag monarchs.

The Fake Mustache Drag King Troupe is part of what brought drag artist, producer, comedian and DJ DeVery Bess to Calgary from Montreal. Since then DeVery Bess has become one of the city’s most popular performers — he even won a competition that earned him a weekly hosting gig at a bar that had never had a drag king, rather than a queen, as a regular host. For a city that leans conservative, DeVery Bess says it was a big deal for a Black drag king to land that kind of gig.

He also created stage time for other BIPOC performers via his variety show Reverse Racism — the title of which is a playful response to a comment a former romantic partner made about how it would be reverse racism to have a lineup of all non-white performers. DeVery Bess says The Fake Mustache Drag King Troupe was essential in making Calgary a city where he and other drag kings can prosper.

A post shared by Haus of Trash YYC (@hausoftrashyyc)

For example, in 2018 Duke Carson was the first king to win the prestigious title of Alberta’s Next Drag Superstar, an honour that’s handed out as part of an annual drag competition. Duke Carson is a member of the Haus of Trash, a “drag incubator” that grew out of a RuPaul’s Drag Race viewing party at Dicken’s Pub. Haus of Trash members Vanta Blaque and Karla Marx say the queer-friendly space was essential to diversifying drag in Calgary.

Since the start of the pandemic, the Haus of Trash has produced a string of innovative digital drag shows, like one that tasked performers with creating tongue-in-cheek spoofs of infomercials and its most recent effort, ThemTV Cribs, which took viewers on tours through the homes of drag performers. In tapping an inclusive mix of performers from across the country for its digital shows, Karla says she’s reaffirmed her belief Calgary’s drag performers are as good as — or better than — ones from larger cities.

“Calgary has been looked down upon by other drag scenes for a long time,” she says. “I’m fucking sick of it and it stops this year. I think Calgary has one of the best, bar none, drag scenes in the entire country.”

Le Drague Cabaret Club in Quebec City may have the best stage dedicated to drag in the entire country. The space has full theatre-style lighting and enough stage space that its annual Christmas show features a specially built two-storey set. The bar even employs an artistic director, dressers to help performers change between numbers, a tech and prop assistant, and someone to run the spotlight.

Scarlett Paris Schatzi, who describes herself as “Canada’s Plus Size Barbie Doll,” is Le Drague’s current house queen, meaning she’s a frequent presence at the venue, the focus of its marketing materials, and has her own dressing room large enough to store her drag. Scarlett explains that Le Drague produces big, theatrical productions about four times a month. The shows draw inspiration from everything from disco to Mean Girls to cosplay.

Le Drague is where Canada’s Drag Race star Kiara got her start; her castmate, Rita Baga, also had a monthly show there prior to her TV debut. Most of the numbers in Le Drague’s shows are English language, but hosts speak in French unless they’re doing crowd work with Anglophone tourists, who flocked to the space pre-COVID.

The venue is also home to Will Charmer, a drag king who moved to Quebec City after starting drag at Cabaret Mado in Montreal. While Will Charmer is one of the only drag kings performing on a regular basis in the city, he says the queens at Le Drague have welcomed him into the family.

Le Drague dominates the scene, but it’s not the only drag space in town. Across the park the venue sits upon is Bar St-Matthew’s, a much smaller gay bar with Friday night drag shows where Will Charmer says you’re more likely to see a queen perform a classic Quebecois song than one of the pop culture-driven numbers over at Le Drague.

As the biggest city on the east coast, Halifax is the region’s natural drag hub. Even so, the city is sometimes overlooked by artists in other parts of the country. One of Halifax’s best-known performers, Elle Noir, says people often act like drag “stops in Montreal.”

“We’re not in the ice age over here,” she says. “We have cell phones and plumbing and, yes, we have drag queens.”

The drag scene in Halifax dates back to at least the 1980s, when the main spot for drag was a bar called Rumours where you had to get buzzed in the front door. It was the age in which Pride marchers wore bags over their heads for fear of their safety and the bar employed security guards not to keep minors out, but to keep the queer folks inside safe.

The heart of the drag community was once Menz and Mollys, which closed in 2020 and sold earlier this year. The loss of the space was a hit for the community, but there are still other venues that host drag shows, like the restaurant M+J’s  and the Grafton Street Theatre. And Craven Blood says no matter what happens, local drag performers will find their stage.