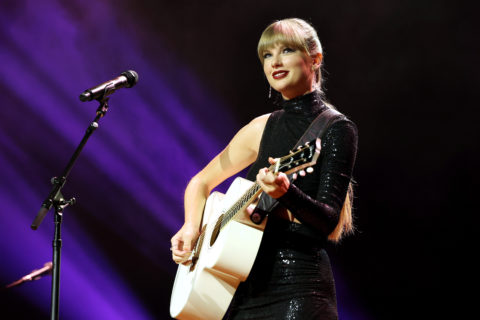 Taylor Swift Is In Her Midnights Fashion Era

Swift famously uses fashion to express different stages of her life. With her new album "Midnights," she’s ushering in a new one.

Taylor Swift has a song for any situation. Whether you’re feeling a little sad, confidently empowered or straight-up vengeful, surely a lyric from her extensive catalogue will be able to sum it up. After all, for 16 years, the singer-songwriter has been constantly reinventing her image — not just through genres of music, but curated fashion epochs. And as she enters her Midnights era, Taylor Swift is introducing herself yet again.

The upcoming project, which marks her tenth studio album, chronicles 13 sleepless nights throughout the artist’s life. Ahead of its release on October 21 at 12 am ET (obviously), Swift has been teasing fans with a series of niche visuals and thematic descriptions. Her latest style choice? ’70s nostalgia, of course.

In a TikTok series called “Midnights Mayhem,” the star has been sharing song titles one by one in a decidedly old-fashioned setting. Grainy videos show Swift seated in front of a velvet curtain with mindless elevator music playing in the background. Each instalment features the singer in a casual retro outfit, usually wearing shades of warm brown, high-waisted pants, collared shirts and lots of stripes.

Our LAST EPISODE! The season finale of Midnights Mayhem with Me, with QUITE the twist of an ending… #TSmidnighTS #SwiftTok #MidnightsMayhemWithMe

Her album art doubles down on these dated ’70s details, with vertical wood panelling, patterned decor and hues of harvest gold and burnt orange. Known for its themes of personal liberation and rebellion against authority, no decade is more fitting for Swift’s newest aesthetic undertaking. At this point, we’ve come to expect the unexpected from the fashion chameleon. Just look at her shape-shifting track record.

After debuting her self-titled album in 2006, Taylor Swift was introduced to the world as a country-singing, small-town girl. Sporting bouncy ringlets, cowboy boots and ballgowns, her teenage love songs conjured a feeling of fairytale-like wonder and branded her as a cutesy ingenue. Over the next few years, her albums Fearless and Speak Now incorporated pop into her sound and coincided with an increasingly sophisticated red carpet wardrobe. The songs in these eras focused on heartbreak, new love and the nuances of being a teenage girl.

But as she grew up, so did her sound and style. With the releases of 2012’s Red and 2014’s 1989, she traded her spirally strands for blunt bangs and straightened hair. She wore red lipstick like armour and began experimenting with avant-garde cut-outs and body-hugging silhouettes on the red carpet. In the following years, Reputation’s edgy goth visuals rejected her girl-next-door roots. After that, Lover’s whimsical themes offered another one-eighty, as Swift sported playful ensembles complete with rainbow motifs and heart-shaped glasses. With each drastic change, the star found new ways to acknowledge — and rebel against — public opinions that labelled her as manipulative and boy crazy.

In 2020, the wildly successful sister albums Folklore and Evermore presented a transformation in Swift’s storytelling and style. The folky, melancholic songs detailed fictional characters instead of her own experiences. Album art showed Swift in comfy cardigans, flowing dresses and long coats. She was arguably at the height of her career — yet this was the most pared down Taylor Swift had ever been. By telling these stories, Swift channelled a pure version of her artistry. It seems Midnights will be a culmination of that journey.

The new album returns to a more personal songwriting approach. “This is a collection of music written in the middle of the night, a journey through terrors and sweet dreams,” Swift said in a release. This dichotomy has also shown up in her recent style moments.

Midnights, the stories of 13 sleepless nights scattered throughout my life, will be out October 21. Meet me at midnight.

From the shimmering gold frock she sported at TIFF to the celestial-themed one-piece she wore at the VMAs afterparty, Swift has been referencing celebratory disco ball fashion on the red carpet. But her day-to-day style and album art are much more intimate. Take Taylor Swift Midnights’s four vinyl covers, each of which shows her looking glamorous yet forlorn in private, personal settings. With Midnights, Swift is showing two sides of the same coin: her public persona versus the person she is when no one’s looking. And in doing so, she is pushing back on her reductive celebrity image in a new way.

Over the years, Swift has managed to use style as a tool to protect and express herself. Sure, her artistry is about the ups and downs of relationships. But beyond that, it’s about growing up, finding yourself and experimenting with your look as you go. Throughout her career, she’s shown that it’s always okay to reimagine yourself for the better. And whoever it is you decide to be, there’s probably a Taylor Swift song for you.