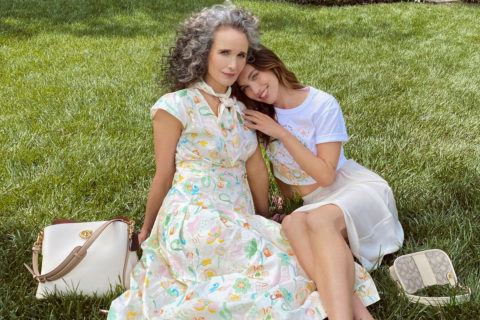 From Kaia Gerber and Cindy Crawford to Naomi Campbell and her mom Valerie, here are some memorable mother-daughter fashion campaigns.

For many women, the person whose style has most inspired their own is their mother. That’s certainly the case for many celebrities, some of whom have posed with their moms in fashion campaigns, highlighting how their singular mother-daughter style (and beauty) has carried on through generations.

From bona fide supermodel Naomi Campbell and her model mom Valerie Morris-Campbell (who taught her daughter how to walk *and* how to strut) to Cindy Crawford and Kaia Gerber (who says she still borrows from her mom’s closet and only wishes they were the same shoe size), we’ve spotlighted some of the most memorable mother-daughter duos featured in fashion campaigns over the last decade, modelling for brands from Coach to Lanvin.

In a new ad campaign for Coach, long-time actress and model Andie MacDowell and her daughter Rainey Qualley, who is a musician and part-time model, appear together just in time for Mother’s Day. The charming family-themed campaign also features musician Ciara and her three kiddos, along with model Paloma Elsesser and her mom and grandma.

The campaign, shot by photographer Alessandro Simonetti, features the pair donning Coach summer dresses and heels in the Hollywood Hills. With MacDowell often away on film or television shoots, she told Vogue that this opportunity brought her and Qualley closer: “My girls and I have always enjoyed fashion together.”

In their first campaign together, supermodel Cindy Crawford and daughter Kaia Gerber, 52 and 16 at the time, respectively, posed for an Omega watch campaign. (Crawford had been the face of the brand for two decades.) Sporting white sleeveless tanks with beachy hair and natural make-up, the pair’s resemblance is striking as they stand side by side in the black-and-white ad shot by Peter Lindbergh. Although they didn’t feature in the campaign, Crawford’s son Presley and husband Rande Gerber are also ambassadors for the brand.

Gerber had only begun modelling a year before this shoot, but quickly made a name for herself, and is well on the way to becoming as notable a name on the runway as her iconic mother.

If you’ve ever wondered where supermodel Naomi Campbell gets her beauty, just look to her mother Valerie Morris-Campbell, a model herself. In 2018, the pair starred together in Burberry’s Festive Campaign, alongside actors Matt Smith and Kristin Scott Thomas, musician M.I.A., and artist and photographer Juno Calypso, who also shot and directed the campaign’s photos and video. In the portraits, the stylish duo sport matching white shirts and black blazers.

This, by the way, isn’t the first time the two have modelled together, having hit the runway for Mugler in 1993 and walking together again in 2010 for a London charity show.

It doesn’t get much more legendary than actress, model and filmmaker Isabella Rossellini, who posed with her daughter Elettra Rossellini Wiedemann, also a model and food blogger, for jewellery brand Menē in 2018. In the shots, taken by photographer Paola Kudacki, Rossellini sports a white shirt and black blazer, wrapping Wiedemann, who is in a matching black top, in her arms. In a press statement, Menē founder Roy Sebag said, “The enduring bond of mother and daughter embodies the values Menē seeks to promote: sustainability and a powerful lasting connection between the past, present, and future.”

Dead ringers Pat Cleveland and daughter Anna Cleveland Von Ravenstein starred together in Lanvin’s 2015 summer campaign, which was dedicated to mothers and daughters. (Fun fashion fact: the brand was originally started by Jeanne Lanvin as a means of designing clothes for her daughter.) The quirky campaign was shot by the equally quirky photog Tim Walker, and also features Violetta Sanchez, Luz Godin, Kirsten Owen and Billie Rose Owen.

Cleveland was one of the first Black supermodels to ever walk the runway, paving the way for everyone from Beverly Johnson to Naomi Campbell, and is still modelling today. She and her daughter have also appeared together in campaigns for Marc Jacobs and Zac Posen.

For Mother’s Day in 2018, Aerie’s swimwear campaign starred model Iskra Lawrence and her mother Wilma, alongside actress Yara Shahidi and her mother Keri, and gymnast Aly Raisman and her mother Lynn. The campaign was developed because when the brand surveyed its customers, Aerie found the top role model for most is none other than their mom.

The Lawrences, both models, sported matching pink and orange patterned swimsuits with cut-outs on the beach in the unretouched campaign. Lawrence is known for being body positive, particularly on her Instagram, where she said of the Aerie campaign, “I got it from my mama! … Forget the physical; I’m talking about all the morals and values she instilled in me.”

In a 2018 campaign for her swimwear line Ashley Graham x Swimsuits for All, which advocates for body diversity and positivity, the model brought along her mom, Linda. In the stunning images, the pair spend a day on a Moroccan beach, wearing coordinated colourful swimsuits.

The campaign also includes a video narrated by Linda, in which she says to her daughter, “I raised you to be confident, courageous, and fearless, and I am so proud of the woman you are today.” In her own Instagram post sharing the video, Graham wrote: “Thanks to my @themamagraham for showing me how to be the strong woman I am today.”

Although she may not be a full-blown model just yet, then-four-year-old Anja Mazur posed alongside her model mother Alessandra Ambrosio, a longtime Victoria’s Secret Angel, in London Fog’s Spring 2013 and Fall 2012 campaigns. In some shots, Mazur wears a polka-dot trench coat and wields an umbrella as tall as her, while mom wears a matching skirt, trench, handbag and accessories.

At the time, Ambrosio said to People, “I’m so proud of her. As a mom, having my daughter steal the spotlight is pretty funny, and I just love it.” She also warned that Mazur was a pro at walking a runway already, so we may have a future supermodel in our midst.

Photography courtesy of Coach
Get the best of FASHION in your inbox Thanks for signing up!
The latest fashion, beauty and celeb news delivered right to your email #FASHIONforall Now, check your inbox to complete your subscription
We won’t ever use your email address for anything else
Want even more FASHION? Follow us on social media.