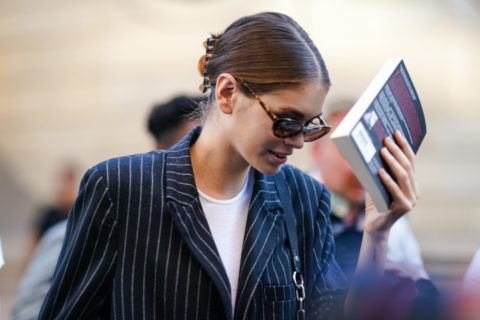 These Celebrity Book Clubs Are Creating an Online Community

We may be spending all our time at home these days, but the upshot of it is more time to devote to the books sitting on our bookshelves, whether real or virtual. Looking for a great recommendation? Read on for a list of virtual book clubs and reading series spearheaded by celebrities whose literary tastes span genres, styles and themes.

Kaia Gerber
Model Kaia Gerber is trying to offer people a respite from the stressful times, bringing her community of Instagram followers together for a virtual book club. “I know we are all feeling isolated right now, so I was trying to think of easy ways we can stay connected (beyond just scrolling) and decided I’m gonna start a book club,” she shared. “I read a lot on my own, but would love to be able to talk to you guys about it… so every week I’m gonna post a book to my stories and the following week I’ll jump on live (sometimes with a friend, writer, guest etc.) so we can all talk about the book that week! ♥️” So far the book club has discussed Sally Rooney’s Normal People, Lena Dunham’s Verified Strangers, and Bonjour Tristesse by Françoise Sagan. Next up: Trick Mirror by New Yorker writer Jia Tolentino.

for week 4 of book club, we are reading TRICK MIRROR by jia tolentino! i am beyond excited to talk about this book… it’s a new collection of essays that are so modern and so honest. I think you guys are going to love it (it’s a first time read for me too). @jiatortellini, the author is going to be on as my guest to talk about the book, internet culture, and contemporary feminism. order it online or download it… friday 5pm pst / 8pm est

Dolly Parton
In lieu of the premiere of The Library That Dolly Built, a documentary about Dolly Parton’s lifelong work to promote childhood literacy via her non-profit foundation Dolly Parton’s Imagination Library, the country singer has launched an online reading series for children. The series, called GoodNight with Dolly, airs weekly on Tuesdays at 7pm EST on YouTube. Books on the lineup include Llama Llama Red Pajama by Anna Dewdney, The Little Engine That Could by Watty Piper and Parton’s own I Am a Rainbow and Coat of Many Colours.

“This is something I have been wanting to do for quite a while, but the timing never felt quite right,” Parton told Deadline. “I think it is pretty clear that now is the time to share a story and to share some love. It is an honour for me to share the incredible talent of these authors and illustrators. They make us smile, they make us laugh and they make us think.”

Emma Roberts
Actor Emma Roberts and her friend, producer and writer Karah Preiss, set up the Belletrist book club on Instagram back in 2017 because of their shared love of books and also to create a resource that served as a literary recommendation site for millennials. Each month they pick a new book and talk about it with their online community, often inviting guests–like Joan Didion, NBD–to join the conversation. Their April book pick is Writers & Lovers, a novel about “art, love, and ambition” by New York Times bestselling author Lily King. Last month, Belletrist also launched a Virtual Book Tour series on Instagram, with Preiss interviewing authors like Kate Weinberg, Patrice Caldwell and Veronica Roth from their homes.

APRIL BOOK ✨ Writers & Lovers by @lilybooks [pick it up from indie bookstore of the month @boulderbookstore via the link in our profile!]

Reese Witherspoon
Reese Witherspoon’s love of books is no surprise. The actress and producer has already adapted several novels for film and television, including Gone Girl, Wild, the Emmy-winning Big Little Lies, and her latest series Little Fires Everywhere. Witherspoon began the book club back in October 2015, selecting one book each month with a woman at the centre of the story, and her pick for April 2020 is Untamed by Glennon Doyle. “This memoir is so packed with incredible insight about what it means to be a woman today, what it means to be “good,” and what woman will do in order to be loved,” says the actress.

Looking for community and conversation? #ReesesBookClub is excited to host a virtual book club meeting this Sunday, April 26 at 11am PDT featuring @GlennonDoyle. Enter for a chance to win 1 of 50 seats via the link in bio, or at hello-sunshine.com/vbc. ⠀ ⠀ 50 winners will be randomly selected to join the video conference. No purchase necessary. Void where prohibited. Ends 4/22/2020 at 11:59pm PDT. Adults 21+.

Oprah Winfrey
This OG book club dates back to 1996 and has recommended over 80 books, personally selected by Oprah Winfrey, since its inception. Titles that have made it to Oprah’s Book Club over the years include Song of Solomon by Toni Morrison, Middlesex by Jeffrey Eugenides and The Underground Railroad by Colson Whitehead. Her pick for this month is Hidden Valley Road by Robert Kolker. Last year, Winfrey teamed up with Apple to take her book club to the screen, launching a talk show on Apple TV+ featuring interviews with the authors of books selected for her club. So far, Winfrey has interviewed Ta-Nehisi Coates, author of The Water Dancer; Elizabeth Strout, author of Olive, Again; and Jeanine Cummins, author of American Dirt.

For every copy of our book club picks sold on @applebooks, Apple will make a contribution to the @americanlibraryassociation to support local libraries, fund programs that give access to everyone, and create lifelong readers at an early age. There is no better time to read than now. Click the link in our bio to download your copy of “Hidden Valley Road” and join the discussion starting this Monday. #ReadWithUs

Photo by Edward Berthelot/GC Images
Get the best of FASHION in your inbox Thanks for signing up!
The latest fashion, beauty and celeb news delivered right to your email #FASHIONforall Now, check your inbox to complete your subscription
We won’t ever use your email address for anything else
Want even more FASHION? Follow us on social media.