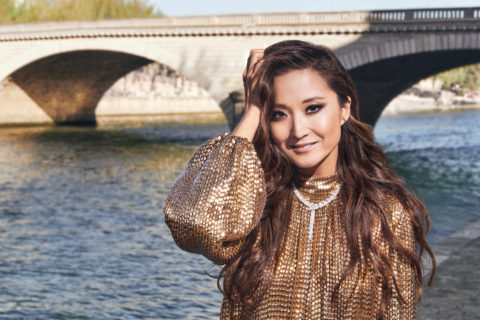 Ashley Park’s positivity is profound. But having battled leukemia at age 15 and dealt with discrimination in Hollywood, the 'Emily in Paris' actor hasn’t always lived la vie en rose.

Twenty-four hours before we meet, Ashley Park was in Paris at the Valentino Spring 2023 show, sitting beside Florence Pugh and Dove Cameron. “Fashion week is always a madhouse, but the best part is when I see my friends,” the Emily in Paris actor says over video chat from her apartment in New York. “We had to keep reminding ourselves to play it cool, but Flo [Pugh] kept making me laugh.” While Park may have looked like a seasoned veteran in her tuxedo-inspired Valentino look, her first runway presentation was only just before the pandemic, in 2019. Fittingly, she was attending a Chanel show with fashion executive Mindy Prugnaud, a friend of Darren Star’s (the creator of the hit series), who inspired her character, Mindy Chen. “It was during the filming of the first season, when the show was still anonymous, and I just wore whatever was in my closet,” Park shares.

On this cool day in October, she’s taken a similar, albeit less luxurious, approach. When she pops up on my screen, she’s lounging in a black-and-brown tie-dyed sweatsuit. “The secret to my personal style is wearing the most comfortable thing possible but making it look good,” she laughs. While she sometimes struggles wearing Mindy’s flamboyant fashions (have you seen how tall her heels are?), what’s important is that the clothing is true to her character. “Costume designer Patricia Field and I try to ensure that whatever outfit Mindy is wearing, you can tell she feels like herself — empowered and comfortable,” says Park. “Ashley might not always feel that way [laughs], but that’s what’s so fun about acting.”

Emily in Paris has been a sensation since it debuted in 2020: It’s charming and a little corny, the European locations are luscious eye candy and the ensemble cast has colourful chemistry. But the core of the show, and the reason for the mania, is the fashion, which is over-the-top and always designer; it provided some much-needed escapism during the dark times of the pandemic. “I always knew that fashion was going to be a huge part of the show because it’s set in Paris and has Darren and Patricia, who, of course, did Sex and the City,” Park reflects. “But we had no idea the show would become such a part of the zeitgeist.”

Park has had two going on three seasons of being Mindy, best friend to Lily Collins’s Emily and an heiress turned nanny turned burgeoning singer. “She marches to the beat of her own drum,” Park says of the character that made her recognizable. And with the show set to premiere its third season on Netflix this December, her star will only keep rising.

But before all that, Park was just a young girl from Glendale, Calif., who loved performing, dancing and playing piano. It wasn’t until middle school, when she accompanied some friends to an audition for a youth community theatre, that she discovered her love of acting and singing. “I was like, ‘What is this world?’ And then I quickly became obsessed with musical-theatre albums,” she shares.

Shortly after, a 15-year-old Park was diagnosed with leukemia. She spent eight months in the hospital and underwent six rounds of chemotherapy. To make matters worse, she was also battling mastocytosis. This condition causes severe allergic reactions and resulted in Park experiencing symptoms any time she was required to take medication — so almost constantly. “I think when you’re going through such trauma at a young age, you aren’t aware that it’s traumatic — you’re just trying to get through it,” she reveals. “Maybe I got my resilience from my parents, but it was never an option that I wasn’t going to make it.”

Now, Park says she’s learned to look at her battle with cancer as “a complete blessing” because it fundamentally shaped her and her perspective on life. She even goes as far as to say that it pushed her toward the stage because she could pretend to be a different person. “I was determined that I was not going to be held back or defined by my diagnosis,” she explains. “As an actor, I didn’t have to worry about people worrying about me. Being in another person’s skin became a very fun and safe place.”

Of course, some bodies have been more fun to inhabit than others. Park began her Broadway career as an understudy and ensemble member in the 2014 production of Mamma Mia! In 2018, after a string of other successful musicals, including The King and I and Sunday in the Park With George (in which she worked with Jake Gyllenhaal), she earned a Tony Award nomination for her performance as Gretchen Wieners in the Broadway adaptation of Tina Fey’s Mean Girls. Impressed by her comedy chops, Fey then cast Park in a recurring role in the Peacock sitcom Girls5eva. And most recently, Park starred in the Regency-period drama Mr. Malcolm’s List.

But her next project hits a little closer to home: The currently untitled R-rated all-Asian comedy directed by Adele Lim, the co-writer of Crazy Rich Asians, is set to hit theatres in 2023. “To have it written and directed by and starring Asian females is very empowering,” shares Park, who herself is Korean American. “It’s a true Asian-female story. I get to be a fully realized person, not just a side character who propels another person’s story forward. We are not being laughed at; rather, we are laughing at ourselves.”

When I ask if Park has experienced discrimination firsthand, I don’t even finish my question before she responds with “Every second of every day.” But she doesn’t like to dwell on it. “If I thought about it all the time, I would never move forward,” she begins, mirroring her sentiments from our earlier conversation about leukemia. “This business is hard, so if you don’t find joy in it, then there’s truly no reason to be in it. I’ve always felt like acting is in my blood and bones — I just love it!”

Besides the actual craft of acting, Park also loves how film and TV sets bring people together. Since filming Emily in Paris, she now considers Collins to be one of her besties, and she’s excited for the audience to see how their fictional friendship continues to develop in season three. Park also somewhat cryptically teases that Mindy’s journey this year might be related to her birth chart. “In the first season, we got to see her rising sign,” she says. “Then, last year, we got to see her moon and what’s really going on inside of her. And now we get to see her star sign and understand who she is as a whole.”

But unlike her character, Park knows exactly who she is and isn’t. She is an eternal optimist who has learned to take the good with the bad, can find the humour in horrible and unapologetically prefers slippers over stilettos. Still fresh from Paris Fashion Week, she’s looking forward to getting some rest. With a new season of a hit TV show and a hotly anticipated film all on their way, though, it’s unlikely this will happen — and that’s fine by her. “Sometimes I wish there were four of me so I could have time to sleep, eat and do everything else,” she reflects. “I hate half-assing stuff — I want to give 150 per cent to everything. I just have to work on my stamina [laughs].”