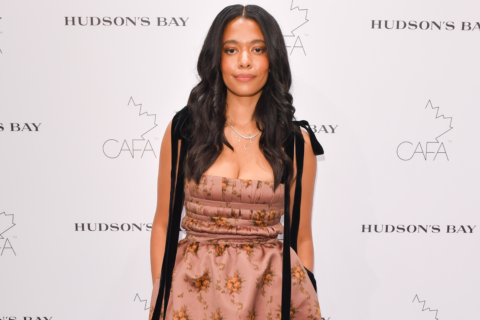 Canadian Designer Aurora James is Honoured at The Fashion Awards 2020

The honourees were revealed in a video released this afternoon.

The Fashion Awards are usually a glittering night of fashion’s finest gathering to celebrate the top talent in the industry but as with everything in 2020, this year’s awards looked a little different.

As a result of the COVID-19 pandemic, the awards went virtual this year and changed format. Instead of specific awards, 20 people were honoured with awards across four categories: Community, People, Environment and Creativity. The votes were cast by 800 members of the international fashion industry who “were called upon to nominate who they thought should receive an accolade” according to a release. The final list was then determined by comparing the nominations to the criteria for each of the categories, as well as the number of nominations.

One of the honourees in the People category – which “recognizes those who have led change by encouraging equal, diverse, empowered workforces from head office to supply chain and shop floor” – was Canadian designer Aurora James. Earlier this year, James launched the 15 Per Cent Pledge, a call to action for retailers to commit to dedicating 15 per cent of their shelf space to Black owned brands. A release says James was recognised “for her efforts to bring change to the fashion industry through her campaign for systemic change to promote Black-owned businesses and through her traditional design practices.” The release also noted that James’ work with her brand Brother Vellies “strives to keep traditional African design practices and techniques alive while creating and sustaining artisanal jobs within the industry.”

The Canadian designer was honoured alongside British Vogue’s Edward Enniful, Lindsay Peoples Wagner and Sandrine Charles of the Black in Fashion Council, designer Priya Ahluwalia for her work in promoting sustainable fashion and raising awareness around the challenges of the Black community, and A-COLD-WALL* designer Samuel Ross, who created the Black Lives Matter Financial Aid Scheme.

In the community category – which “focuses on the impact fashion has on communities in light of the pandemic as well as the role skills and craftsmanship can play in sustaining local livelihoods”  – A Sai Ta was recognized alongside Chanel, the Emergency Designer Network, Kenneth Ize and Michael Halpern.

Anya Hindmarch, Christopher Raeburn, Gabriela Hearst, Stella McCartney and The Fashion Pact were all recognized for their efforts in helping to create a circular fashion economy in the Environment category, whilst Grace Wales Bonner, Jonathan Anderson, Kim Jones, Miuccia Prada and Raf Simons for Prada, Riccardo Tisci and Burberry were all honoured in the Creativity category for their “global impact.”