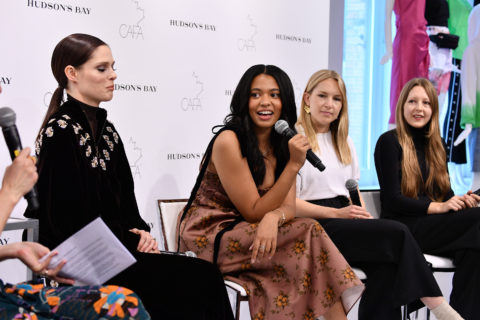 Aurora James Expands 15 Per Cent Pledge to Include Canada

After signing Sephora and Rent The Runway, James has extended the initiative to Canada.

In early June, Canadian designer Aurora James (who runs footwear brand Brother Vellies) introduced the 15 Per Cent Pledge to encourage some of America’s biggest retailers to commit to ensuring that 15 per cent of the products on their shelves were from Black-owned businesses. Now, the initiative is coming to Canada.

Today, the Canadian website for the pledge went live with a message that read, “We’re calling on Canada’s major retailers to support brands that are representative of the diverse Canadian population. It’s high time that wealth and opportunity were distributed more equitably and intentionally to BIPOC (Black Indigenous People of Colour).”

The aim is to have Canada’s major retailer sign the pledge ahead of Canada Day on July 1. “Canada’s population is 5 per cent Indigenous and 3.5 per cent Black. According to the 2016 Census, 22.3 per cent of Canadians identify as visible minorities. Our petition is calling on Canada to apply the 15% Pledge in support of economic equality for the BIPOC of Canada.” It added, “Let’s make Canada Day something we can all celebrate.”

Of expanding the 15 Per Cent Pledge to Canada, James said, “Almost a month ago, we called on major US retailers to commit to the 15 Percent Pledge and allocate 15 percent of their shelf space to Black owned businesses in the name of financial equality. With growing traction and support, we are thrilled to announce that today, we are expanding the fight to all of North America by launching the 15 Per Cent Pledge in Canada. As a native Canadian, and a Black business owner, it is critical that retailers including Holt Renfrew and Hudson’s Bay Company support brands that are representative of the diverse Canadian population. With major retailer support, we will be able to distribute wealth and opportunity more equitably to BIPOC (Black and Indigenous People of Colour) within Canada.”

In the US, Sephora and Rent The Runway have committed to the pledge so far, with James prompting the likes of Shopbop, Net-a-Porter, Matches Fashion and Ulta Beauty to follow suit.