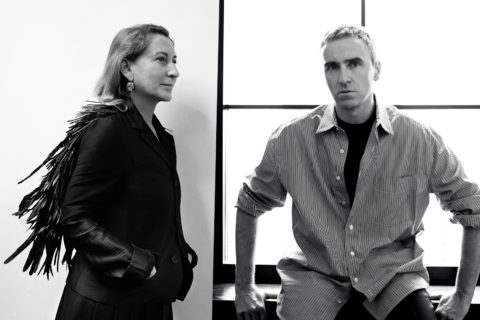 Breaking news out of Milan this morning as former Calvin Klein designer Raf Simons has been named as co-creative director at Prada.

According to a press release, Simons – who recently teamed up with Doc Martens to reimagine its 1460 boot – is to work alongside Miuccia Prada “with equal responsibilities for creative input and decision making.” He begins his new post on April 2, and the pair’s first co-designed collection will debut at MFW in September. Simons’ will continue to run his namesake menswear line concurrently.

The news was announced at a press conference during Milan Fashion Week, where, according to WWD, Prada said of the pair’s relationship: “We like each other, we respect each other. I was sometimes criticized for not doing collaborations, so now I am doing one.” Simons added, “There’s more strength when two creatives believe in it, then when one believes in it. If we both believe in it, we’re going to do it. I do believe a lot in collaboration, I think it strengthens the result.”

Simons has had a long-standing relationship with Prada herself and with the Prada Group – in 2005, they named him as creative director of Jil Sander. And it is expected that this partnership will be ongoing indefinitely with Prada answering, “In theory, it’s forever,” when asked about the length of Simons’ contract with the house. She simultaneously dismissed rumours of an imminent retirement though this move has been viewed by many as the first step in securing the brand’s future post-Prada.

It’s also a somewhat unprecedented move for someone as established as Prada to bring in a second name – though we suspect this is going to be one heck of a dynamite pairing. Bring on September.

Photograph courtesy of Prada/Brigitte Lacombe and
Get the best of FASHION in your inbox Thanks for signing up!
The latest fashion, beauty and celeb news delivered right to your email #FASHIONforall Now, check your inbox to complete your subscription
We won’t ever use your email address for anything else
Want even more FASHION? Follow us on social media.