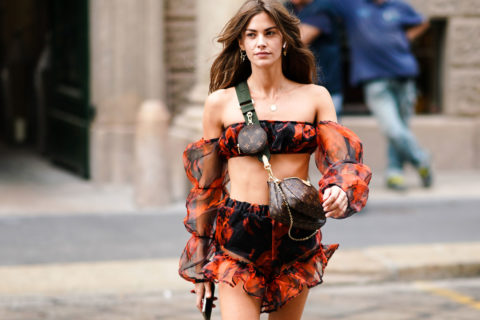 Say no to bloomers!

If I’ve said it once, I’ve said it a thousand times: I love period dramas. I binged Bridgerton in two days. I will defend Colin Firth as the best Mr. Darcy until the day I die. And I have marked the release of Netflix’s adaptation of Jane Austen’s Persuasion on my calendar. I refuse to see them as guilty pleasures because I believe that if they bring me unbridled joy, why should I feel guilty about that? So when fashion began to get on board, I was initially thrilled: the ballet flats, the Nap dresses, the lacey bralettes — all positive. And even if I only wear corsets on the rarest of occasions myself, I can still somewhat support them.But finally, fashion has gone too far. Bloomers!? Really?

Bloomers on the Gucci, Louis Vuitton and Anna Sui Cruise 2023 runways. Bloomers on Bridgerton season two. Bloomers trending on TikTok. Have you ever thought to yourself, “you know what these shorts need? Elastic on the top and bottom.” Or, “my midsection looks too small. I would love to add more volume and fabric to the lower part of my stomach, butt and hips.” No, you haven’t. In fact, almost no one has.

Historically, bloomers were never meant to be seen. Popularized in the mid-1800s, these puffy pantaloons were an early prototype for panties meant to be worn under skirts and dresses. Before that, women essentially sported long slips but the general bulbous shape was not unique, as men had been wearing some exaggerated form of  pumpkin-esque breaches since the Medieval ages.

Now, in defence of the bloomer, I will say I was pleasantly surprised by its feminist past. Besides giving women more autonomy over their bodies and taking cues from menswear, the article of clothing actually gets its name from American women’s rights advocate Amelia Bloomer, who in the 1850s wore them as an act of rebellion. By raising the length of her skirt, her gathered underpants (quite literally pants) were visible for everyone to see and were considered scandalous for the time. Shortly after, the rest of the suffragettes adopted the bold look and the jacket, knee-length skirt and bloomer combo became known as “the freedom dress.”

However, feminist fashion statements aren’t on trial here. From a purely superficial and aesthetically-oriented perspective, I still reject them. Is it so wrong of me to want my summer wardrobe to be flattering, especially in Canada, when we’re covered up in layers of wool and fleece for 90 per cent of the year? And yes, fashion is a form of self-expression, but after seasons of oversized and bulky everything, I kind of miss seeing my shape in its truest form. And not squished into a sausage-like bodycon dress either; normal shorts that go in at the waist and out at my thighs. Is that so wrong? It’s like Jane Austen (kind of) says: Women of sense do not want silly shorts.  So for now, I plead you, leave the bloomers in 1850.