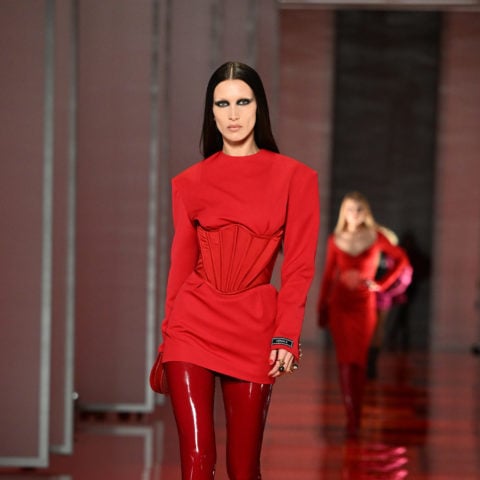 The Corset is Getting a Modern Makeover

By blending new and old, the futuristic corset takes Regencycore to the next level.

The corset is one of history’s most controversial pieces of clothing. And thanks to Bridgerton’s revival of Regency-era fashion, it’s getting a modern-day makeover.

Corsets were first constructed as an undergarment to flatten the bust in the 16th century. The following decades saw different variations on the original design emerge, with the most well-known being the waist-cinching bodice depicted in period dramas like Bridgerton.

The Netflix series has taken more than a few liberties with its costuming. Exhibit A: the historically inaccurate tightly wound corsets seen on the show’s leading ladies. During the Georgian era in which Bridgerton is set, corsets were actually soft and breathable since dresses had column-like silhouettes that hid curves.

Over time, corsets gained a reputation for being oppressive and painful, which some argue is an unfair characterization. And after going through various modifications, it eventually fell out of popularity in the early 20th century.

Fast forward to today, and the garment back in the fashion zeitgeist and taking new shape.

Most trend forecasters predict futuristic takes on the corset to be most popular. At Fashion Month, runways were full of revamped corsetry, with several designer sending modern silhouettes and unusual fabrics down the catwalk.

Balmain also tapped into the corset’s contemporary comeback with metallic body armour and protective padded vests. Roberto Cavalli put a bondage spin on the piece by introducing corsets made of belts and straps. Notice a trend?

Versace’s runway show further confirmed the corset’s return by crafting a collection based on unconventional bodices. Sleek, colourful corsetry was all over the runway — not only as tops but woven into dresses and coats. The show’s designs also played around with textiles, incorporating denim, tweed and mesh.

New takes on structure and material appears to be the corset’s ticket to comfort in 2022.

“While the traditional corset style is undeniably beautiful to look at, it leaves little room for an everyday wearable piece,” says Jamie Dawes, owner of Vancouver-based apparel company Fyoocher. To make her breathable corsets, dubbed the “U Top,” the designer has used a variety of unique textiles like decades-old tapestries, discarded leather scraps and even a movie theatre seat. Montreal-based label Periodique also uses repurposed materials — such as tablecloths — to create their corsets.

“In contrast to the traditional corsets, which are constrictive and meant to show a desired small waist or hourglass figure, Fyoocher’s U Top is undoubtedly more casual and far more comfortable than the original perspective,” Dawes explains.

After the corset’s hiatus from public favour in the early 1900s, Vivienne Westwood famously re-introduced it during London’s punk fashion movement of the ‘70s. Through the ‘80s and ‘90s, the Victorian style was reimagined again by Jean-Paul Gaultier and Thierry Mugler, and seen on fashion icons like Madonna.

Now, thanks to our Regencycore obsession, designers are once again digging into the fashion archives to find fresh inspiration. And we’d argue the futuristic corset is just the start.

Bella Hadid walks the Versace Fall/Winter 2022/2023 show in Milan. Photography courtesy of Getty Images
Get the best of FASHION in your inbox Thanks for signing up!
The latest fashion, beauty and celeb news delivered right to your email #FASHIONforall Now, check your inbox to complete your subscription
We won’t ever use your email address for anything else
Want even more FASHION? Follow us on social media.