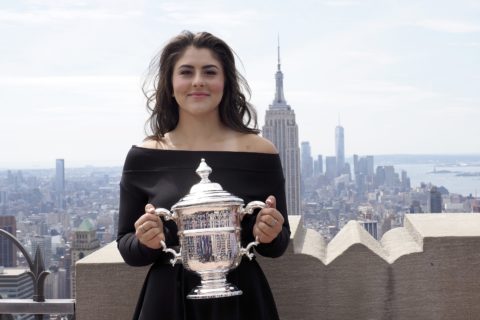 On Saturday, 19-year-old Bianca Andreescu made history as she beat Serena Williams in the US Open 2019 final to become the first Canadian to ever win a Grand Slam singles match. The country roared in support of the teenager who has repeatedly emphasized how proud she is to represent Canada on the international stage. And her support of all things Canadian has extended in fashion, with the champ choosing Montreal-based designer Marie Saint Pierre for her most recent outing.

Yesterday, Bianca attended her WTA official portrait ceremony wearing a black, off-the-shoulder dress from the storied brand’s Fall 2019 collection. Speaking with FASHION about how the moment came together, Marie Saint Pierre said, “Following Bianca’s impressive performance and big win against Serena Williams at the Roger’s Cup earlier this year, it came naturally to contact Bianca and congratulate her and her team. Ever since then, we have been in contact with her team and briefly discussed about collaborating with Bianca. We did not get the chance to meet her until a few days ago as everything came up so fast. The moment the big news was out, both teams quickly put her look together and arranged a fitting the following morning at her hotel.”

The brand is known for dressing other powerhouse Canadian women, including Tessa Virtue and the Dufour Lapointe sisters, as well as Gloria Estefan and Viktoria Modesta, and Marie credits this to the quality of her designs. “Our technical and stretch fabrics are very well appreciated – not only do they give room for movement but they are also light and wrinkle-free. People wearing them feel comfortable yet edgy and sophisticated.”

As for having Bianca wear one of her pieces, Saint Pierre says, “Bianca represents the brand’s values to perfection and I am very proud that she picked us to launch her media tour. As a Canadian fashion house, it is a true honour to dress the first Canadian to win a Grand Slam title,” adding that she hopes to continue collaborating with Bianca in the future.

If you’re keen to emulate Bianca’s winning style, the Cyme dress retails for CAD$1,100 and is made using fine scuba with asymmetrical hand-pleated taffeta detailing at the hemline. It is available at the brand’s new pop-up in TriBeCa (which will be open for two months), as well as its Montreal and Miami boutiques, online and through its stockists across North America.

Photo by JOHN G MABANGLO/EPA-EFE/Shutterstock
Get the best of FASHION in your inbox Thanks for signing up!
The latest fashion, beauty and celeb news delivered right to your email #FASHIONforall Now, check your inbox to complete your subscription
We won’t ever use your email address for anything else
Want even more FASHION? Follow us on social media.