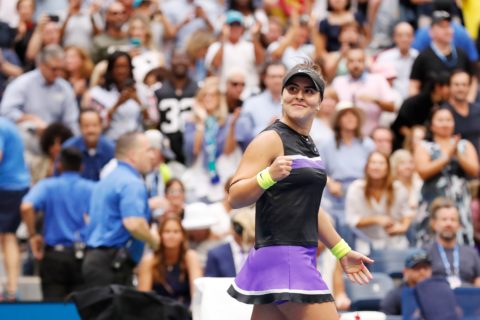 The Ontario native has made history once again

Bianca Andreescu has made history yet again: the 19-year-old Canadian beat all-time great Serena Williams to become the first Canadian to ever win a US Open Grand Slam singles title.

In a nailbiting one and a half hour match, Bianca held her own against Williams to win 6-3, 7-5, denying Williams her chance to equal Margaret Court’s record for 24 Grand Slam singles title wins. She also overcame a crowd heavily in favour of Williams to achieve the history-making win. The pair shared a hug and smile at the net after Bianca scored the winning point.

Williams was supported by Anna Wintour (who flew out of Toronto after receiving the Icon award at TIFF to catch the match) as well as the Duchess of Sussex (who flew in specifically for the game). Andreescu’s parents, Maria and Nicu, were cheering their daughter on throughout the match. Cara Delevingne, Ashley Benson, Josephine Skriver and Spike Lee were also spotted in the crowd. After she won, Andreescu climbed a ladder to get into her box to celebrate with her family and coach in a highly emotional display.

At the trophy presentation, a smiling Williams received deafening applause and said of her opponent, “Bianca played an unbelievable match. I’m so proud and happy for you. It was incredible tennis out there. If anyone could win this tournament, outside of Venus, I’m happy it’s Bianca.” 2019 marked 20 years since Williams first stepped onto the court at the US Open. “I just feel really honoured to still be out here and be competing at this level,” she said. “My team has been so supportive of all the ups and downs and downs and downs and downs, hopefully we’ll have some ups soon!” she added with a laugh.

Taking to the stage to receive her trophy, Andreescu said, “It’s so hard to explain in words but I’m just beyond grateful and truly blessed. I’ve worked really, really hard for this moment. This year has been a dream come true and being able to play on this stage against Serena, a true legend of this sport, is amazing.” When asked what she had to overcome in the match, Bianca answered with a laugh, “Definitely the crowd. I know you wanted Serena to win so I’m so sorry. Obviously it was expected for Serena to fight back, she’s done that so many times in the past and that’s why she’s such a champion both on and off the court. I just tried to block everything out.”

When asked about her journey over the past year (she didn’t qualify for last year’s US Open), she said, “Last year wasn’t an easy period in my life, I was going through a lot with injuries but I persevered and I told myself never to give up. I just kept believing in myself and kept working hard and kept the momentum and confidence this whole year and hopefully I can keep going.” Presenter Tom Rinaldi then asked about how her parents were involved in the win, to which she replied, ” I can’t thank them enough for everything they’ve done for me. It’s been a really long journey, maybe not so long, I’m only 19. It hasn’t been easy so I just have to say thank you and let’s keep going.”

Bianca was then presented with the 2019 championship trophy and a cheque for USD$3.85 million to which she said, “I’ve never seen this much money!” with a laugh.

Photo by JOHN G MABANGLO/EPA-EFE/Shutterstock
Get the best of FASHION in your inbox Thanks for signing up!
The latest fashion, beauty and celeb news delivered right to your email #FASHIONforall Now, check your inbox to complete your subscription
We won’t ever use your email address for anything else
Want even more FASHION? Follow us on social media.