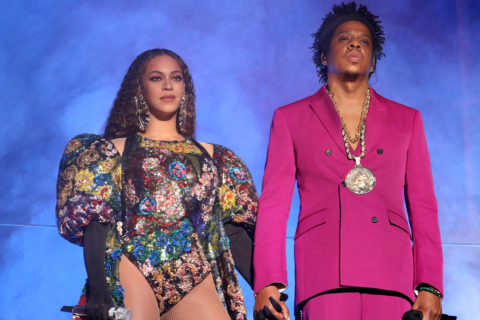 They might be life partners, but they're also rivals in this one arena.

Last June, Puma announced they had signed Jay-Z as creative director of basketball operations to work on “player signings, product design and marketing strategy” for the brand. Now, a full nine month gestation period later, Beyoncé has announced a partnership with adidas, making her and Jay-Z partners in life and rivals in the sneaker wars.

This morning, adidas announced the “partnership of a lifetime” – Beyoncé’s own words – with the most influential pop star of the 21stcentury, full stop. Beyoncé will design signature clothing and footwear lines for the brands as well as oversee an expansion of her Ivy Park line, which she founded in 2016 in conjuction with Topshop. In 2018, Beyoncé acquired full ownership of the line after Topshop founder Sir Philip Greene was accused of sexual assault, making her one of the first Black women to become sole owner of an athleisure brand.

A press release stated, “Beyoncé and adidas are natural partners, both with a deep respect for and commitment to creativity, equity and creators.”

“adidas has had tremendous success in pushing creative boundaries. We share a philosophy that puts creativity, growth and social responsibility at the forefront of business. I look forward to re-launching and expanding Ivy Park on a truly global scale with a proven, dynamic leader,” Beyoncé added in the statement.

Did you hear that faint sound of a gong in the distance? The race to see who can sell more sneakers has begun.

Photo by Raven Varona/Parkwood/PictureGroup/REX/Shutterstock
Get the best of FASHION in your inbox Thanks for signing up!
The latest fashion, beauty and celeb news delivered right to your email #FASHIONforall Now, check your inbox to complete your subscription
We won’t ever use your email address for anything else
Want even more FASHION? Follow us on social media.