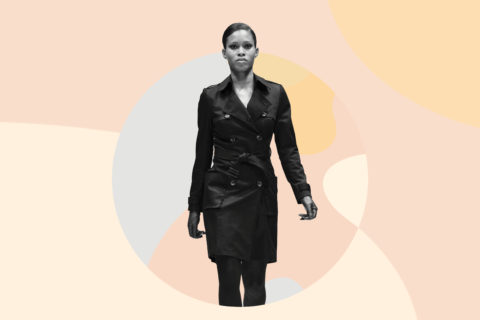 As a Model, I Was Being Judged by the Very Foundation of Myself

Why Bee Quammie’s experience as a model went from being a dream scenario to a reality check.

Once upon a time, I entered the world of modelling. As a tall, slim 12-year-old, I was offered a spot in a “model house” (a residence where several models live together at one time) in New York. I remember how excited my agent was when she shared the news with my mother and me – and how crestfallen I was when my mother said she was against it. For almost every objection she had, I silently responded in my head: “Her safety!” my mom said; I said, “I’m sure there are bodyguards.” “Her education!” my mom said; I said, “I’ll bet there are tutors.” “Her mental health!” my mom said; as a preteen, I had no clue what she was worried about. As I continued my modelling career, I soon came to the realization that modelling and my mental wellness were often at odds, and I had to learn how to rebuild my self-confidence.

Growing up, I adored glamour. My friends’ extra-curricular activities consisted of gymnastics and dance lessons, while mine were acting classes. I begged my parents to take me to casting calls. I watched Fashion Television faithfully every Sunday, sitting enraptured in front of the TV while Jeanne Beker lifted the veil and showed me a vision of what I hoped would be my future. I practised my runway walk, trying to emulate Naomi Campbell and Yasmeen Ghauri; perfected my photo shoot angles in the mirror; and waited impatiently for my big break.

It felt like it came when I signed with a modelling agency in my Southwestern Ontario hometown, but that break snapped when the aforementioned New York offer was rejected by my mom. I could understand her safety and schooling concerns, but I didn’t have a clear concept of what mental health had to do with anything. When I moved to Toronto a decade later and rededicated myself to my dream of modelling, I began to understand the connection.

Rejection and race are the two things that affected me the most. Choosing to enter the modelling industry knowing how notoriously cutthroat it can be is one of the wildest choices you can make, especially if you aren’t mentally prepared for it. When I was younger, not getting booked for a job stung, but I was always excited for my next chance. In my 20s, I had a much better understanding of what was at stake, so each failed casting call or agency meeting hurt more than the last.

Ultimately, I knew I was being judged by the very foundation of myself – the things I couldn’t easily change, if at all.

The most public thing about us is our body, but our relationship with it can be extremely private and complex. The realm of modelling only focuses on the public and makes no space for the rest; that’s a lesson I learned quickly. Standing in front of a potential agent or casting director and being told exactly how to walk – and then being poked, prodded and measured – was jarring for much longer than it wasn’t.

Placing a portfolio in front of a fashion gatekeeper and trying to decipher the look on their face as they flipped the pages twisted my stomach into knots. Sure, I could always change my hair, and the wizardry of makeup could give my face new angles and contours, but, ultimately, I knew I was being judged by the very foundation of myself – the things I couldn’t easily change, if at all.

My quietly competitive nature had been honed during my youth by playing basketball and running track and by attempting to exceed academic expectations. But modelling was different. I didn’t see how I could work harder or do better after losing out on a gig. For whatever reason, my face wasn’t right or my body wasn’t right or my walk wasn’t right, and the subjectivity of fashion meant that what one gatekeeper detested about me, another loved. Finding a quiet place in my mind to go to, where I allowed that subjectivity to free me instead of locking me into a mental prison of picking myself apart, required a lot of work. Sometimes it was just easier to join the chorus of judgment and level it against myself, too.

The journey to a more diverse and inclusive fashion industry has been a slow one.

The journey to a more diverse and inclusive fashion industry has been a slow one. I still remember the agency meeting where I was told “there’s already a Black girl on the roster” and the agent didn’t see anything much different in me. I later looked up that lone Black model, and aside from our shared height, we looked as different as two Black girls could look. I also remember the meeting where a potential agent told me that they could possibly work with me if I promised to stay out of the sun during the summer so they could market me as “exotic.” Like other physical attributes, my Blackness was something that would not change. In those moments, I felt defiant in how proud I was to stand out, and unlike with other rejections based on how I looked, it was much easier to chalk these ones up to a failing of the person sitting in front of me. I didn’t internalize them at all.

What did start to mess with me was when I booked jobs and saw how my Blackness was received. There was the shoot where I was requested to arrive with my hair in its big and kinky-curly natural state and then had to deal with deep sighs from the photographer when he couldn’t figure out how to shoot without cast- ing shadows over my face.

Then there was the Toronto Fashion Week runway show where I almost missed my first walk because the one Black hairstylist was on lunch break and no one else felt courageous enough to put my hair in a bun. Makeup artists who didn’t have my foundation shade treated me like I was an inconvenience, and I began to panic if I ever left for a gig without my own makeup bag. Clients wanted to look progressive by booking a Black model, but they didn’t know what to do with us. And I was hyperaware of how differently I was treated, compared to other models.

It became an odd mental space to be in, where I refused to apologize for my Blackness but felt like a lone fish swimming in an anti-Black ocean. Why did no one else see how wrong this all was? Why was it more acceptable for white and other non-Black industry folks to treat my Blackness like an annoyance than to make these spaces more truly inclusive? I really began to question my participation, because the anxiety before, during and after a job began to weigh on me.

After I became a mother, I questioned my participation even more. Getting booked for commercial campaigns where I played a “young mother” role always had me cast with a Black “father” alongside very-light-skinned or biracial children. Genetics is a funny thing – two Black people can produce children with various phenotypic qualities; however, these casting choices seemed more like a statement on acceptable presentations of Blackness than an acknowledgment of genetic variance. Was I being complicit in what felt like the erasure of children who looked like mine? My anxieties now didn’t just centre on how I felt about myself in the industry but also on what my children would think and feel when they saw images like these.

Pulling back from modelling helped me address the guilt I felt in those moments as a mother, quieted the anxieties around feeling like an inconvenience and helped me deal with the wounds the constant rejection had given me. It was a process of dismantling negative thoughts and replacing them with new positives about myself. It was a process of constantly empowering my own two daughters; I may no longer play the mother to little girls who get lighter and lighter in each subsequent photo shoot, but if this limited presentation of Black beauty persists in the Canadian industry, my daughters will need a buffer for their self-esteem.

Thinking back, I remember feeling that Jeanne Beker was giving me a peek into my future – one full of glamorous moments. But that glamour came at a cost that I couldn’t conceive of in my youth. Once I had the mental capacity to be able to better handle the challenges of the industry, I had aged out of the “ideal” of youthfulness. (Ageism in fashion is another discussion that needs to continue.) And while I thank the industry for giving me the experiences it did, I thank my mom –  and her seemingly excessive concerns – even more.

This article originally appeared in the November 2020 issue of FASHION magazine.

Photography by George Pimentel; WireImage via Getty
Get the best of FASHION in your inbox Thanks for signing up!
The latest fashion, beauty and celeb news delivered right to your email #FASHIONforall Now, check your inbox to complete your subscription
We won’t ever use your email address for anything else
Want even more FASHION? Follow us on social media.