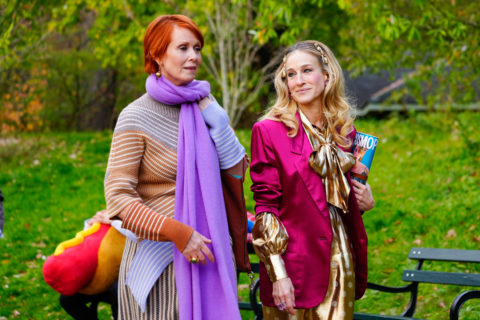 Suddenly, we need a pigeon clutch.

Prepare your eyes: And Just Like That… season 2 is currently being filmed on the streets of New York City, and it’s displaying its whimsical costuming chaos for all to see.

Written and directed by Michael Patrick King, HBO’s buzzy Sex and the City reboot follows main characters Carrie Bradshaw (Sarah Jessica Parker), Miranda Hobbes (Cynthia Nixon) and Charlotte York (Kristin Davis) alongside new friends as they navigate life in their 50s. In its short time on this Earth, And Just Like That… has been no stranger to controversy. From the show’s unsatisfactory explanation for the absence of Samantha Jones (played by Kim Cattrall), to the sexual assault allegations against Chris Noth (who appeared in the first episode as Mr. Big), to the overall lukewarm reviews by critics, season 1 had some casting and plotline blunders. But despite certain polarizing choices, the revival stays true to the aesthetic essentials of the original series. A hyper-romanticized portrayal of New York City? Check. Regular Sunday morning brunch dates? Check. Unapologetically off-kilter fashion? Check, check, check. And the wacky wardrobe is all thanks to costume designer duo Molly Rogers and Danny Santiago.

Season 2 is expected to premiere by the summer of 2023, and in it, the famous trio will be reunited with season 1 newcomers, reportedly including Che (Sara Ramirez) Seema (Sarita Choudhury), Lisa (Nicole Ari Parker) and Nya (Karen Pittman). If the street style photos are any indication, the new iteration is honouring its nonsensical sartorial roots.

First, there were viral photos of Parker clutching an all-too-realistic pigeon bag by JW Anderson while shooting in October. (This is a shocking pivot from Carrie’s hatred for the Judith Leiber swan bag that Mr. Big gave her in Sex and the City season 2, but no matter.) To make up for the outfit’s lack of on-the-go storage, her jumpsuit was complemented by a teeny Fendi ankle purse. And ever since these polarizing pictures, each new costume sneak peek has been a little amuse-bouche for a season undoubtedly filled with loveably questionable fashion.

On January 9, Parker was pictured in a brightly coordinated turquoise and fuchsia get-up (below). Choudhury, whose confident character has become a fan-favourite addition to the group, was spotted wearing a hooded golden gown with painted pin-up bangs and shimmery eyeshadow. The opulent look can only suggest season 2 will be filled with drama, and as it turns out, the show has been foreshadowing this type of theatricality for months.

The tail end of 2022 was filled with chaotic sneak peeks from the upcoming season of And Just Like That…. We saw Charlotte wearing a top hat, a hot pink blazer, and a bustle skirt adorned with bold stripes. We saw Lisa (Charlotte’s mom friend) donning a custom Valentino frock with a towering feathered headpiece. We saw Carrie sporting a reflective polka-dot dress with an oversized bow, fuchsia jacket and two gold hair bows sitting atop her heavily teased hair.

For those who are watching purely for nostalgia, it appears season 2 will offer some sentimental sartorial moments, too. In November, on-set photos showed Carrie in a reimagined version of the Vivienne Westwood wedding dress she wore in the first Sex and the City movie. Other behind-the-scenes shots imply that there will be another sidewalk burglary reminiscent of Carrie’s stolen Fendi baguette bag. The victim this time? Seema and her Birkin.

While filming “And Just Like That…” Season 2, Sarah Jessica Parker is seen wearing the Carrie Bradshaw wedding dress from the first “Sex and the City” movie. pic.twitter.com/Y05lc9qZw7

As these photographic tidbits make their way onto social media, they’ve been met with mixed reactions and skepticism. Is the fashion so over-the-top it’s become bad? Are the showrunners trying too hard? Has And Just Like That… become a lacklustre version of its iconic predecessor? To all of the above, we argue this: The best thing about this franchise is its campy costuming.

With a tendency to wear birds on her head and belts around her bare midriff, Carrie and her clothing choices were never rooted in practicality. Whether she’s stopping the show or just stopping traffic, her enduring reverence for her wardrobe is refreshing. With And Just Like That… season 2, we’re once again gifted that type of street-style nonsense from every angle.

As the characters experiment with their looks — Carrie finds new ways to incorporate birds into her outfits, Miranda’s androgynous wardrobe is more feminine as she explores her queerness, Charlotte is now coordinating with her dog — And Just Like That… champions the message that women can have fun with their styles at any age. Above all, the series knows it looks ridiculous, and, like the show that came before it, it happily leans into that reputation.