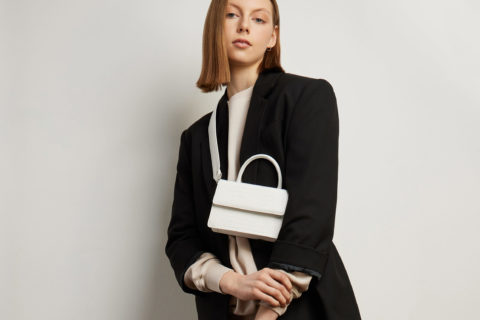 “We never put out a product unless we absolutely love it.”

For Hannah Kim, Joanna Lee and Rebekah Ma, staying connected during COVID-19 wasn’t just crucial for typical familial reasons like catching up and sending good vibes. The three siblings also helm ai Toronto Seoul, a sustainably-minded vegan handbag and accessory brand that’s based in Toronto and produces its wares on a small scale in Seoul, South Korea. Kim and Lee are located in Canada, while Ma has lived in Seoul for the last two years and lends a hands-on approach to how their products are made.

The trio collaborates on the brand’s designs with their mother, Hun Young Lee, who in addition to being an award-winning fine artist, helped her daughters to develop their passion for fashion. “Our mom, who was an immigrant in Toronto in the 1970s when she was in her early twenties, felt fashion was something she could connect with when she came to Canada because it’s a universal language,” says Kim. “Growing up, we always had the latest Vogue and InStyle and Chatelaine on our coffee table. And watching Fashion Television every Sunday night was our ritual.”

It’s through another family connection that the sisters came to learn about sustainable and conscious manufacturing, as their aunt owns a facility in South Korea that makes vegan leather bags. The country, Lee notes, was a pioneer in terms of developing and producing such materials. “We grew up wearing our aunt’s bags,” says Kim when reflecting on how their awareness of mindful design developed. “It’s something that’s been part of our lives without really thinking of it.”

Of course, growing up in Canada, the three honed an understanding of taking care of the environment in various ways. “We were always educated about respecting the earth in school, like recycling,” recalls Lee, adding that these elements all contributed to how they formed a model for ai Toronto Seoul’s own production. Its bags and other accessories — including hair clips and sunglasses for kids — are made in limited quantities; if a style doesn’t sell, they don’t make it again. “Going that route was very natural for us,” Lee continues. “Our philosophy is that sustainability is based on a collection of choices — the little decisions that you make [contribute to] how we’re affecting the planet.”

The three also came to an appreciation for such decision-making when Kim was diagnosed with a tumour several years ago; her chemotherapy treatment lead the family to reconsider how they ate, turning them to a more plant-based diet. “It shifted our thinking in terms of health,” Lee notes.

The diagnoses proved pivotal in the career direction the sisters would take, too. “We were at a point in our lives when we were all in the education field,” says Kim. “When I was diagnosed with the tumour, I had to stop working. It was a wake-up call for our family, and my mom felt like we needed to do something together. We had always wanted to, [but] that felt like it was the right moment. I was doing chemo, and she wanted to get my mind off it.”

Beginning by importing their aunt’s bags to Canada and then “ghost labelling” for a Toronto-based designer for two years, their confidence grew with the success of each project and eventually, they branched out into creating a brand of their own. The effort is a team one — “Everyone has to be on board with a decision,” Ma says — with the matriarch Hun Young acting as head designer.

“She has a good visionary sense,” Lee says of what inspires ai Toronto Seoul’s pieces. “We never put out a product unless we absolutely love it.” In addition to their mother’s forward-thinking sense of style, Ma says that being based in South Korea has given her insight into the fast-pace of trend adoption there. “The fashion here is beyond compare,” she says. “Living my whole life in Canada, there was a bit of a culture shock — but the fashion is so fun.”

One can sense the admiration for this unique attitude towards dressing in ai Toronto Seoul’s offerings, like the Esse bag style, which was launched last year to address the desire to have a hands-free bag that carries only the essentials. The cross-body comes in a variety of colourways from tonal to two-way blue and yellow, for those a little more adventurous in their accessory choices.

When the brand launched reusable masks close to the start of the pandemic — Ma saw the great need for them in South Korea and urged her sisters that it was an item worthy of creating for their customer base — they not only fashioned them in eye-catching colours. They chose to craft them out of fabric made with an antibacterial yarn called Aerosilver, which has been granted an Eco-Mark award from the Japan Environmental Association. The sisters, who have family who are healthcare workers, incorporated a donation component into sales as well.

“It was a no-brainer for us,” Kim says about giving one mask to a frontline worker for every mask sold. The introduction of the masks also inspired the sisters to offer chains made of recycled acrylic; speaking to the notion of sustainability through versatility, an additional hook included in several styles means you can also affix your eyewear or AirPods for close-keeping.

Multi-purpose functionality was also a key component in another product launch for ai Toronto Seoul during the pandemic — a convertible bag and dog leash set that was created in collaboration with television personality Tanya Kim. “When we were young, there weren’t really many Asian, let alone Korean, women on television that we could relate to,” recalls Hannah Kim. “Tanya was the only person we could relate to. We’ve always looked up to her, and she’s always been a strong supporter of our business. There’s a mutual respect.”

That concept is equally important to the brand’s founders when it comes to the treatment of the makers who craft ai Toronto Seoul’s pieces. And they do what they can to tout the technique of the team, and the conditions under which they work. Highlighting the protections mandated by South Korean government to ensure equitable and safe environments for workers, Kim says that now more than ever, these points are of keen interest to consumers. “We try to tell this story to our customers [because] we know how important that is.”

Photography courtesy of ai Toronto Seoul.
Get the best of FASHION in your inbox Thanks for signing up!
You’ll get the latest fashion, beauty and celeb news delivered right to your email Now, check your inbox to complete your subscription
We won’t ever use your email address for anything else
Want even more FASHION? Follow us on social media.