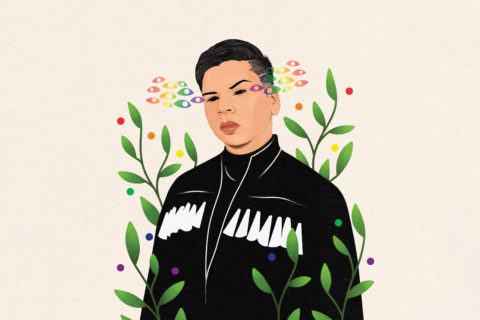 My Queerness is Traditional

Scott Wabano shares how their Indigenous community gave them the strength to embrace their Two-Spirit identity.

By Scott Wabano, as told to Russ Martin

Growing up, I went to powwows all across Turtle Island. As a residential school survivor, my mom felt it was important that I take pride in my identity as Eeyou and Swampy Cree, from the Cree Nation of Waskaganish in Eeyou Istchee. Just as she learned the Cree way of life from her mother, I got my teachings from my mom. The two of us would regularly make the trek from my hometown of Moose Factory, Ont. (which is only accessible by boat or helicopter in the summer), to gatherings in Manitoba, Saskatchewan and Alberta and down into the Dakotas, Montana, Wisconsin and Arizona. The trips started when I was around three years old, and because of them, I was able to build a family of mentors and knowledge keepers — elders, aunties, uncles, cousins and friends — who helped me over time on my journey as a Two-Spirit person.

I was at a powwow when I first heard about Two-Spirit people. The term was created at an Indigenous lesbian and gay inter-tribal gathering in Treaty 1 back in 1990, five years before I was born. Broadly speaking, it describes the many gender, societal and ceremonial roles carried out by people in different nations. Two-Spirit people send messages, tell prophecies and ensure that our histories are never erased. But we are not a monolith; each Two-Spirit person has their own unique gifts. My own Two-Spirit identity is rooted in Eeyou and Swampy Cree culture. Niishuudehiiyuu is an Eeyou Cree word that translates to “the person with two hearts.” As niishuudehiiyuu, we bring balance and harmony to our communities. Another word, muydeow, loosely translates to “medicine person” or “shaman” — someone who can speak to the creator and other realms.

As a child, I wasn’t ready to identify as Two-Spirit. Being both Indigenous and effeminate, I already had dual targets on my back. I’d wear my mom’s T-shirts and pretend they were dresses; I had long hair, shopped in the girls section at Value Village and was always singing along with my Britney Spears CD. I dealt with discrimination by non-Indigenous people and bullying by some members of my own community. But I found refuge at powwows, where I was celebrated for who I was. Even today, when I hear the drums and singing coming from a powwow, I want to run toward the noise and dance in the beautiful, healing energy. Later in life, I sought out that same energy in the queer community.

In 2017, I moved to Toronto. At that time, I was trying to understand what it meant to be gay, non-binary and Two-Spirit, but I was still figuring out how I identified. I met a mentor who gifted me the phrase “My queerness is traditional.” They told me, “Whenever you’re feeling in doubt about your queerness, or when someone tells you to separate your queerness from your Indigeneity, remember that you come from a bloodline of Two-Spirit people, of ancestors who had queerness within.”

That year, Two-Spirit people led the Toronto Pride parade, and I walked with them. I was reminded of how I felt at the powwows, surrounded by my community. In that moment, at the intersection of my queerness and Indigenous identity, I knew that I was Two-Spirit. I didn’t “come out” in the traditional sense; rather, I came into myself as a Two-Spirit person.

I always think of future generations of Two-Spirit people. I feel I have a role in my community to ensure that Two-Spirit youth don’t feel the need to sacrifice their Indigeneity or their queerness to achieve their dreams. As a stylist and the creative director of my genderless clothing label, Wabano, I’ve traded in my mom’s T-shirts for high fashion. Many of my designs are inspired by the Two-Spirit and Indigiqueer people I work with. My 2021 collection included a graphic shirt with the phrase that helped me embrace who I am: “My queerness is traditional.” I wanted to remind Two-Spirit people that these roles and identities have always been a part of our cultures. But the shirt is not just a piece of clothing; it features an affirmation that can be repeated whenever we need it.

ILLUSTRATION BY NALAKWSIS MUKASH
Get the best of FASHION in your inbox Thanks for signing up!
The latest fashion, beauty and celeb news delivered right to your email #FASHIONforall Now, check your inbox to complete your subscription
We won’t ever use your email address for anything else
Want even more FASHION? Follow us on social media.