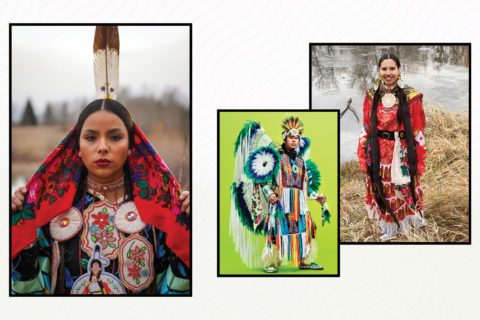 James Jones’s breathtaking variety of regalia — the term for a powwow dancer’s outfits and accessories — would have sat unseen for over a year if it weren’t for TikTok. Better known as @notoriouscree to his three million followers, the Edmonton-based dancer has been breaking out his grass, hoop and fancy dance attire on the social media platform, often explaining his moves and clothing styles to a rapt audience. Part of Jones’s online appeal lies in how he inserts powwow into TikTok’s other trending routines, like the Hold Up and Blinding Lights challenges; it’s also in the visual attraction of his colourful outfits, which until recently would have typically only been seen offline on the powwow trail.

Powwows are capital-E events for Indigenous communities, where we gather to eat bison burgers and Indian tacos and shop from artisan-focused markets. And at the centre of it all is movement. Kicking off with a Grand Entry — which is led by elders and military veterans—those present (including kids decked out in mini-sized regalia) assemble in a circular arena to the beat of the host drum; afterwards, monetary prizes are awarded to the best performers in various stylistic categories.

Some people travel from powwow to powwow across North America; when social distancing meant that we could no longer gather in such spaces, the most dazzling part of these events gained presence on social media instead. Stepping, jumping and spinning while alone in homes, in empty fields and parks and on roads, Jones and others have forged a new trail via Instagram Reels, TikTok and dedicated Facebook groups. And their popularity has, naturally, given them the reach to inspire others.

Nikita Kahpeaysewat (@nikitaelyse) appears on the platform in beaded regalia made by her mom, Chuckie Nicotine. The collaboration is a journey that the two have been on together. Kahpeaysewat says the majority of her family are residential school survivors, including her parents; despite Kahpeaysewat’s distance from traditional cultural practices growing up, seeing these performers dressed in their special attire on social media stirred something inside of her and made her want to take her dancing online, too. “When I decided that I wanted to dance, this surprised my parents as they didn’t grow up traditional either,” she says. “Since then, my mom and I have learned how to bead and sew. She has become quite the artist, and I get to inherit these pieces made by her, which I will pass on to my daughters and they will pass on to theirs.”

The most personal part of her collection is her cape, which took six months to complete. It boasts contributions from many family members, including her adopted mother, Tina Whitford, and other matriarchs. Kahpeaysewat’s regalia also includes otter furs that she wears on hair ties; these furs were sent by a family in Idaho because she reminded them of their late daughter. “It brings me peace to know that my dancing has helped others,” she says.

In fact, one of the first things Kahpeaysewat and Nicotine learned upon entering the powwow world is that regalia has a spirit. It is the dancer’s responsibility to take care of that spirit, says Kahpeaysewat, and to take care of others, you must take care of yourself. Teachings also say that your feelings will be transferred onto whatever regalia item you are creating.

For his powwow wardrobe, Jones turned to well-known regalia makers Michelle Reed and Estrella Palomec Mckenna, who created the beadwork on his hoop and fancy dance pieces. Reed, who is from the Lac du Flambeau Band of Ojibwe and lives in Upper Michigan, researched videos of Jones before starting to make his attire, paying attention to his moves and the movement of his regalia. She also looked at photos of the items, such as bustles and accessories like headbands, that he would wear with each outfit.

Also taken into account: fit preference and the ever-important colour choices. For his hoop dancing regalia, for example, Jones wanted to use the colour turquoise to represent the land and the sky (the hue also symbolizes protection) and fire colours like orange, yellow and red because they represent the life that the sun brings.

Reed, a dancer herself, has made regalia for hundreds of people, and, as with all ceremonial outfits, no two looks are the same. She gets to know every client and learns about their clans, their communities and what they want to represent with what they’re wearing; once she has a feel for that, she asks for the creative freedom to make these special pieces.

A recent order for a men’s grass dance ensemble included a yoke, aprons, pants, a shirt, suspenders, moccasins, cuffs, a neckpiece, a headband and side drops — which should give you a sense of what these outfits can involve. Reed also rolls her own cones for jingle dresses. Every time you roll a cone, she notes, you put a prayer inside it. “There are a lot of different ways to make regalia, and I love that people have their own ways of putting that medicine into each piece,” she says. “Many people are taught that how you feel when you’re making these pieces is very important — that they have to put good feelings into each piece.”

Michelle Chubb (@indigenous_ baddie) — a 23-year-old member of the Bunibonibee Cree Nation who documents how she crafts her own regalia for her 400,000+ followers — notes that for the creation of her first jingle dress, she selected a red fabric with gold tones. “Red is the only colour that spirits can see,” she explains.

Chubb says that wearing her jingle dresses makes her feel powerful and like she’s a part of something: “In the city, you feel alone, but when you go to the rez, people look at you differently because you live in the city. In my regalia, I feel at home.” It’s worth noting that the jingle dress dance itself is a healing one, with the sound of the cones bringing prayers up to the creator.

It’s perhaps because of the significance of these outfits that there has been some pushback about featuring and explaining regalia through channels like TikTok. Jones says that he has received many questions from all generations of Indigenous people about whether he and his peers should be highlighting it there; he has also been accused of using his culture for clout. Yet he says he understands where these feelings are coming from. “We have to remember that for a really long time, our dances, songs and ceremonies were outlawed,” says Jones. “There’s a lot of shame that people still hold to this day, and that’s why I think it’s really important to hold your head high and share your good medicine with people — especially with those who are reconnecting with their culture.”

These online appearances have also become a part of how dancers like Jones and Chubb draw attention to urgent issues within Indigenous communities. This past spring, Chubb danced jingle for a video clip that features text describing the purpose of Canada’s residential schools in light of the gruesome uncovering of the remains of 215 children at a residential school site in Kamloops, B.C. Jones put on his hoop dancing regalia to educate his viewers and pay his respects beside a tribute, by Haida artist Tamara Bell, composed of a symbolic 215 shoes placed on the steps of the Vancouver Art Gallery. “We dance for the ones who never made it home,” his TikTok video reads.

Dan Simonds, co-founder of the Facebook group Social Distance Powwow, says that its social media presence has touched everyone from youth to elders, who often thank the group’s founders for bringing powwows into their homes, which, in some instances, are retirement homes. It has saved lives, says Simonds. “Youth have brought a lot of humour and laughter, and that’s what has gotten people through this pandemic,” he explains. “Early on, we got messages that people were considering ending their lives and our page gave them hope and kept them around; the impact of bringing positivity is something that you just can’t measure.”

Jones feels that his posts are healing as well. “When I started doing it, I asked for guidance,” he says. “All my mentors said that it’s a good thing to share, especially in the times we’re living in. We say that to dance is to pray and to pray is to heal. So, having a platform where we can still put on our regalia and dance — it feels good to do that.”