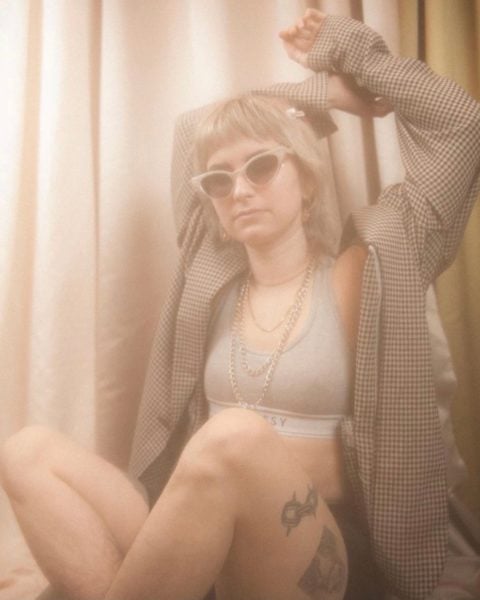 "I came out in stages, in environments where I felt safe and accepted."

In the summer of 2020, right in the thick of the COVID-19 pandemic, tattoo artist Salad (@sadbabysalad on Instagram) publicly came out as non-binary; changed their name on social media; packed up their life in Toronto and moved to Montreal all in the span of a couple weeks. This, however, was not the first time Salad had moved across the country, nor was it the first time they had come out. And while Salad describes their two coming out stories as very different experiences, the fluidity of their identity means they can’t always give concrete answers when others attempt to pin down their sexuality or gender.

“Coming out is something that is constantly changing and evolving. I feel like every week is different,” they say, “but that’s just part of being fluid — there are lots of layers to it.”

In honour of National Coming Out Day, Salad shared their coming out story and how they went from an only child who loved picking berries and hunting in the Yukon to a renowned tattoo artist working in some of Canada’s largest cities: 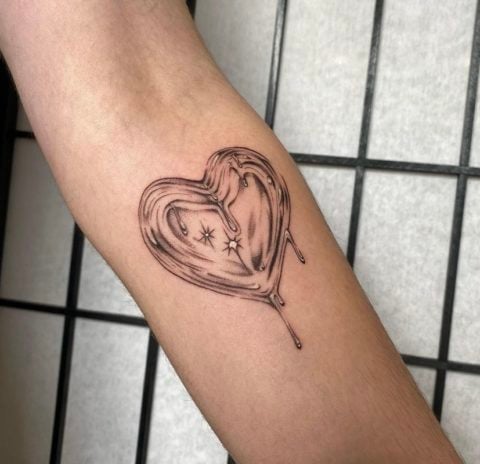 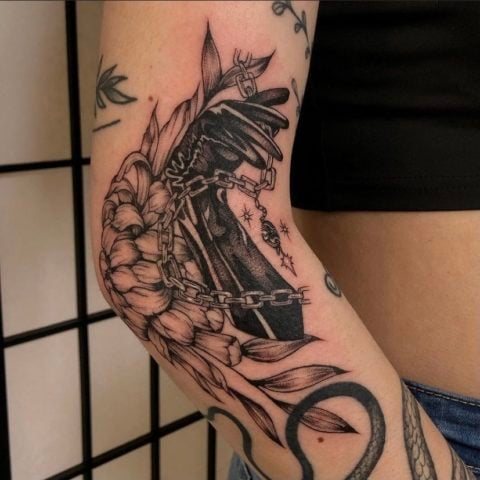 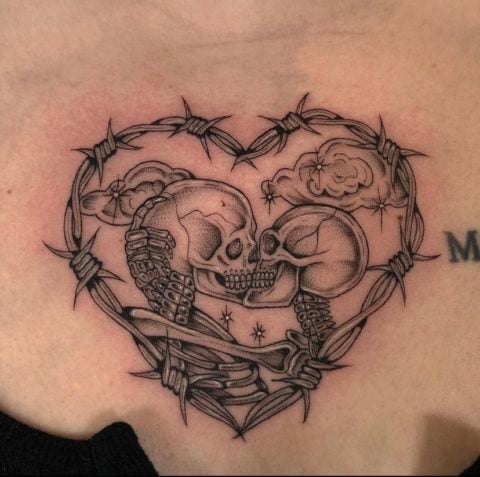 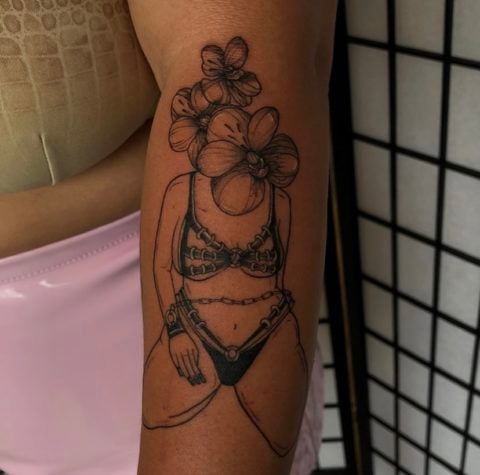 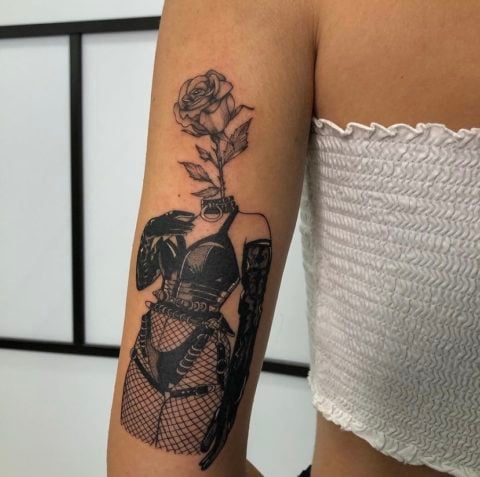 In reference to Yeha Leung (@creepyyeha on Instagram). Photography by Salad 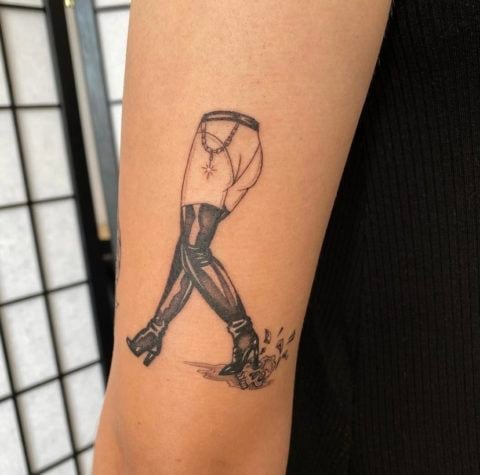 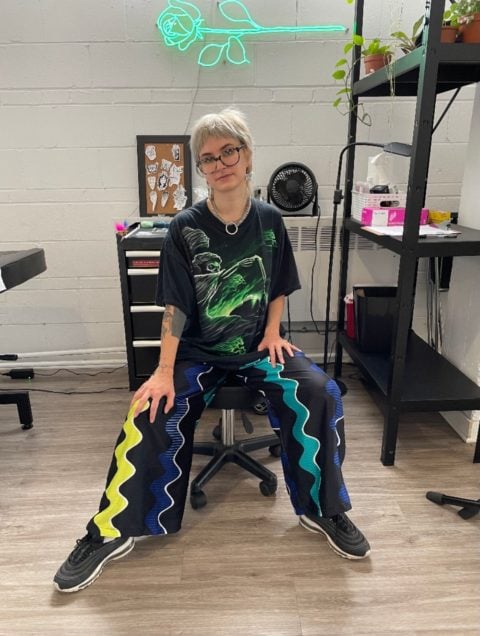 Salad in their Montreal tattoo studio. Photography by Salad

Salad: “I grew up in Whitehorse, Yukon, and I lived just out of town. I was an only child, and I didn’t grow up with a TV, so I didn’t have much exposure to what life was like outside of my province. I also went to a Christian elementary school, but I switched to public school in grade nine because I threw an absolute fit. It’s not like I was super outspoken as a kid, but the way I dressed and the music I listened to and what I was drawing were the only things I felt in control of. It was the one thing that I was like, ‘No, you can’t take that away from me.’

“In elementary school, one of my uncle’s friends owned one of the only skate shops in the Yukon, and he gave me this Playboy Bunny hat, and I wore it to my 6th-grade class. My teacher was going to take it away, but my mom was like, ‘No, this is expensive,’ she was like ‘expel us, we don’t care,’ and I was like, ‘Wow, my mom is so cool.’

“I told my parents I was bisexual when I was 15 or 16, and they were cool with it, but I think they kind of pushed it to the side because I had a boyfriend in high school. It took me leaving the Yukon and moving to Vancouver to start exploring who I was, and I felt like I could actually introduce myself as who I was. My family wasn’t physically there, so they didn’t see me grow into my sexuality. There’s still a lot of things that I’ve tried to explain to my parents, and they don’t really understand, but I just have to be patient with that. I have a tight-knit group of friends from the Yukon, and they all already knew. So when I told them, they were like, ‘Yeah, I know. Cool,’ and we just moved on.

“I remember back when I left the Yukon and moved to Vancouver in 2013, I went to this clothing swap, and I only knew one person there. We all took photos of each other dressed up with this Polaroid camera and wrote something nice on the photos. This random person wrote on my Polaroid, ‘Looks good as f— dressed as a boy or a girl,’ and I don’t tie fashion or looks to gender, but I felt very seen; it felt good to read. After Vancouver I moved to Toronto and went into tattooing.

“I came out publicly as non-binary during the pandemic, so I went from @sadgirlsalad to @sadbabysalad on Instagram. A lot was going on; I quit my job in Toronto and moved back to the Yukon for a bit; I spent a lot of time alone in nature; I deactivated all of my social media. I felt like I had been conditioned to see myself in a certain way that wasn’t actually authentic. It felt like I was putting on a show for a long time, but I never really questioned it because I was just so busy working. With esthetician school and then tattooing, I had associated success and love with hyper-femininity for so long. But then, after seeing people living their lives without labels, it inspired me to stop putting so much pressure on myself to feel super feminine or masculine.

“I came out in stages, in environments where I felt safe and accepted. I came as non-binary out to my roommate, and once she was okay with that, I was like, ‘Okay, now I can tell my best friend.’ Once I was comfortable with that and knew that I was moving to Montreal, I came out publicly.

“I think moving to Montreal made it easier in a way — I did feel safe around the people [I worked with in Toronto], but they’d known me a certain way for so long. I just felt like I would have to keep showing them who I was to reinforce that, and it was a lot easier going to a new group of people and introducing myself like, ‘Hi! I’m non-binary.’

“The biggest thing in the past year that I’ve had fun with is just dressing myself and just letting go of any shame that I have tied to clothing. And it’s okay if something feels right one day and then doesn’t the next.

“I felt a lot of pressure and anxiety coming out later in life as non-binary, especially because I felt as if it’s something I should have known as a child. I had to really see past that and realize that there is no time stamp on coming out or becoming who you are — it’ll happen when it’s supposed to.”

PHOTOGRAPHY COURTESY OF CHELSEA BRIMSTIN PHOTOGRAPHY
Get the best of FASHION in your inbox Thanks for signing up!
The latest fashion, beauty and celeb news delivered right to your email #FASHIONforall Now, check your inbox to complete your subscription
We won’t ever use your email address for anything else
Want even more FASHION? Follow us on social media.