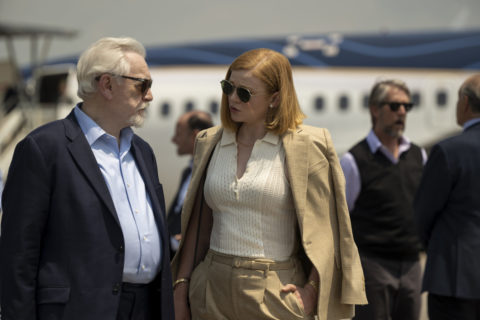 Succession Has Mastered the Art of Quiet Luxury

Nothing about the Roy family is showy, and that’s kind of the point.

Succession wants you to believe it’s not a show about fashion.

But between curse-laden sibling squabbles and heated investor calls, you may have wondered why these riches aren’t so obvious in the Roy family’s fashion choices.

Fan interest in the show’s wardrobe is undeniable, with an Instagram account dedicated to the characters’ outfits accumulating nearly 20,000 followers. This is not to say the Roys are particularly fashion-forward (how many plain black baseball caps does one family need?), but rather, the series’ style secret is about an affinity for quiet luxury.

When you’re as rich as the Roys, getting excited about anything — let alone clothing— is so passé. The media moguls don’t associate with flashy, logo-mania fashion, but instead wear luxury pieces that fly under the radar.

The price of a bag printed with a luxury fashion house logo like Louis Vuitton’s monogram print or Gucci’s double “G” stamp can be easily estimated. This is luxury, but not the luxury that fits the aesthetic (or tax bracket) of the Roy family.

Quiet luxury rejects the desire to show off. Items in the Roy realm of fashion are still extremely expensive, but only recognizable to certain people in certain circles that emit an aura of wealth by looking anonymously chic.

They don’t want anyone to know, but they do want people to know 🤔 #billionaire #loropiana #luxury #jeffbezos

The fashion in Succession has been described by The New Yorker as “expensive but inconspicuous.” Often sporting neutral, subdued tones that are logo-less, the Roy family intentionally exudes extreme wealth and power. To this fictional family, wealth is not about what you have, but about what you don’t.

Characters who don a more flashy wardrobe — like Tom Wambsgans, husband to Shiv Roy — are ridiculed for being nouveau riche. Though Roy family members have their own personal style — take Shiv’s transformation from a traditionally feminine look to Ivanka Trump-esque business wardrobe — they choose not to opt for self-expression through fashion.

The show’s lack of obvious fashion moments is part of the costume direction. You’re not supposed to think about the clothes or where they’re from because if you know, you know. Succession costume designer Michelle Matland explained to The Ringer that the Roy family’s understated fashion is intentional and symbolic.

“They don’t need to have the bling to them, because anyone who would know would recognize them immediately,” she said. “They are the anti-Kardashians.”