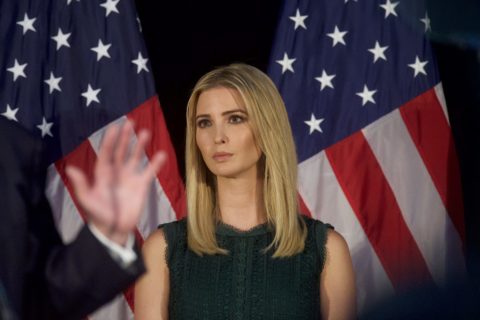 According to The New York Times, the 35-year-old daughter of U.S. president-elect, Donald Trump, plans to step down from the Ivanka Trump fashion brand, along with Trump Organization as a whole.

The news comes just after Ivanka’s husband, Jared Kushner, was named senior White House advisor to his father-in-law. Kushner will be leaving his role as publisher of the New York Observer.

While The New York Times says Ivanka has “no immediate plans to enter the administration,” many are speculating the mother-of-three will play a role in the White House, especially since she and her husband recently purchased a home in Washington, D.C.

Vanity Fair reports Ivanka will “restructure her participation in Trump Organization transactions so that she no longer benefits from the profits.” Instead, she will receive a “fixed series of payments from the revenue of a spate of projects.”

Trump began distancing herself from her fashion label back in November 2016, soon after a promotional misfire where fashion editors were sent a PR pitch on the $10,800 (approx C$14,491) bracelet Ivanka wore during her father’s first televised interview as president-elect with 60 Minutes. Many saw the “style alert” as a conflict of interest that blurred the lines between family business and Donald Trump’s new position as president-elect.

Email sent to journalists by an @IvankaTrump employee, hawking the goods she wore on @60Minutes. pic.twitter.com/aCpNbBBArg

Following the backlash on social media (and an apology from Abigail Klem, president of the Ivanka Trump brand), Ivanka announced on Instagram she would be separating personal and business social media handles.

Starting today, @IvankaTrump will be my personal channel. Stick with me here to see what I'm up to—inside the office and out of it. Follow @ivankatrumphq for the latest from #TeamIvanka, including the content they're creating for #WomenWhoWork on IvankaTrump.com. Go follow them now and read more about it on the site (link in profile).

“Starting today, @IvankaTrump will be my personal channel,” she wrote on Instagram. “Stick with me here to see what I’m up to—inside the office and out of it. Follow @ivankatrumphq for the latest from #TeamIvanka, including the content they’re creating for #WomenWhoWork on IvankaTrump.com.”

So will Ivanka’s resignation help improve her eponymous label’s image, especially after all the negative press and boycotts it received since the election? Stay tuned.

Photo by Mark Makela/Getty Images
Get the best of FASHION in your inbox Thanks for signing up!
The latest fashion, beauty and celeb news delivered right to your email #FASHIONforall Now, check your inbox to complete your subscription
We won’t ever use your email address for anything else
Want even more FASHION? Follow us on social media.